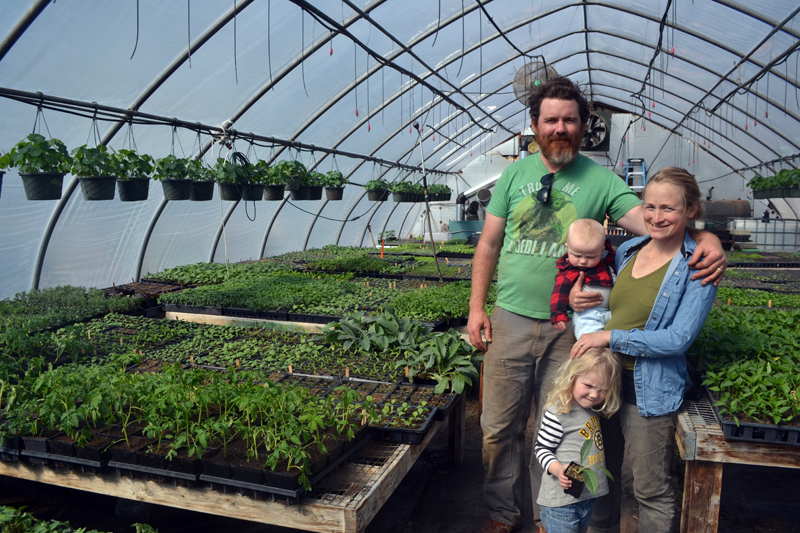 Morning Dew Farm owners Brendan McQuillen and Brady Hatch with their children, Everett and Clodagh McQuillen, stand in one of the greenhouses the farm is leasing at 49 Center St. in Damariscotta, the former home of Spencer’s Greenery. (Maia Zewert photo)

Less than a year after launching a successful fundraising campaign to purchase a 68-acre property along Route 1, the owners of Morning Dew Farm are embarking on a new adventure for 2017.

Brady Hatch and Brendan McQuillen, of Newcastle, are launching Morning Dew Seedling and Supply at 49 Center St. in Damariscotta, the former home of Spencer’s Greenery, where they will sell their certified organic vegetable and flower seedlings and gardening supplies.

Mason Sears, of Damariscotta North LLC, told The Lincoln County News in January 2015 that he hoped to find someone to lease the facility year-round.

“Our goal is to continue to have the business operate in a way (that will) utilize the greenhouse facilities,” Sears said.

In October 2016, Sears approached Hatch and McQuillen to see if Morning Dew Farm would be interested in leasing the space. At the time, Hatch was pregnant with the couple’s second child, and they decided to hold off on making a decision.

“We just didn’t want to bite off more than we could chew at the moment, but we did keep thinking about it,” McQuillen said

When the property was still available in the spring, Hatch and McQuillen made the decision to lease it.

The couple started work on the property in March, removing snow and putting new plastic on the two existing greenhouses. Although the property had been vacant for some time, many tables and other infrastructure remained from when Spencer’s Greenery was still in business. 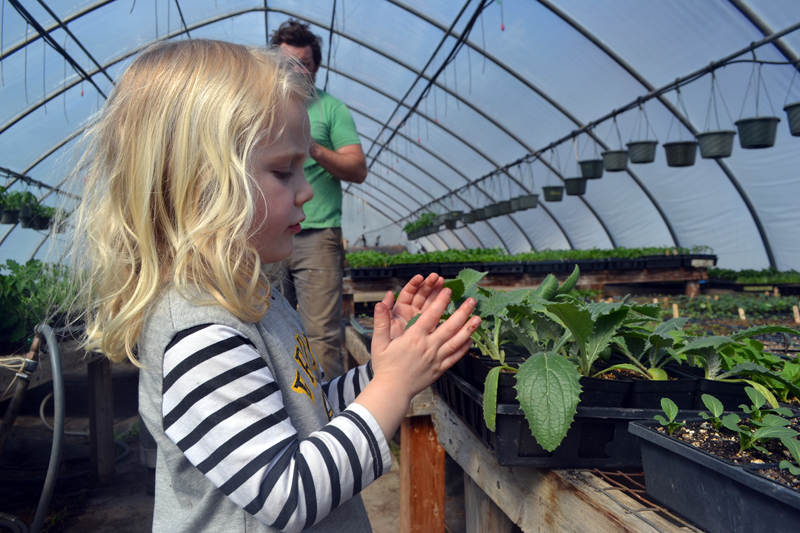 Clodagh McQuillen inspects one of the plants in the greenhouse at 49 Center St. in Damariscotta, the former home of Spencer’s Greenery. Coldagh’s parents, Brady Hatch and Brendan McQuillen, own Morning Dew Farm and are leasing the Center Street property. (Maia Zewert photo)

One of the greenhouses is shared with Kim Michel, owner of Blue Cloud Farm, who is using it to grow her flowers.

With the space available, Hatch and McQuillen decided to start selling vegetable and flower seedlings from the leased property on Saturdays in May and early June. Previously, the seedlings were sold at the Damariscotta Farmers Market, Rising Tide Community Market, and Good Tern Co-op in Rockland.

“There were so many things that were right about this (property), and this just seems like a natural outgrowth of what we were already doing,” Hatch said.

All seedlings, from Johnny’s Selected Seeds in Winslow, are certified organic and “field-tested” by Morning Dew Farm, Hatch said. Morning Dew Seedling and Supply will also carry potting mix and compost from Living Acres, of New Sharon, as well as other gardening necessities.

Hatch will host workshops on planning gardens in the spring and again in the fall.

“We’re selling what we know works for us, and we’re happy to share advice as well,” Hatch said. 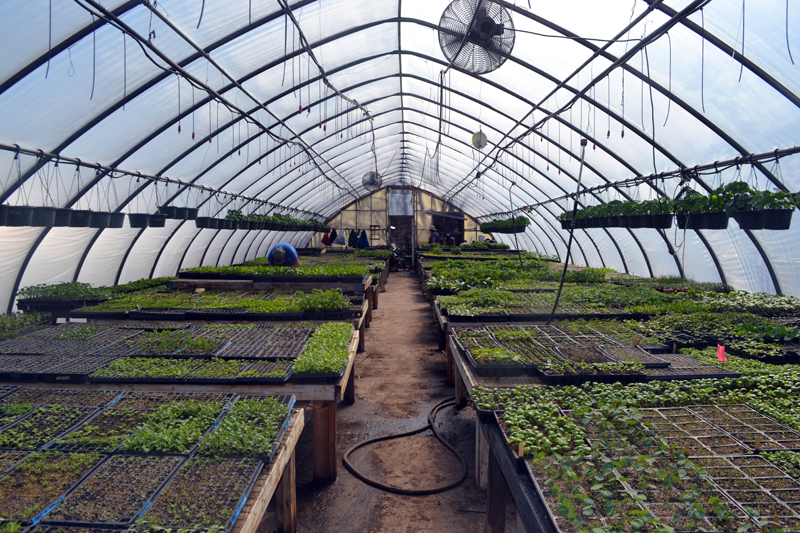 Plants from Morning Dew Farm fill one of the greenhouses at 49 Center St. in Damariscotta. (Maia Zewert photo)

“If Brady, me, or anyone who works for us is here, there’s a lot of knowledge we can share based on our own experiences that could be relevant for everyone from a gardener to a small-scale homesteader,” McQuillen said.

Morning Dew Seedling and Supply will be open on Saturdays starting May 6 through June 3 from 9 a.m. to 2 p.m. Free coffee and doughnuts from Treats in Wiscasset will be available.

“We’re always looking for ways to interact with the community because it’s just been so supportive of us,” Hatch said.

One example of the community’s support for Morning Dew Farm happened in summer 2016, when Hatch and McQuillen launched an online fundraiser to assist in their purchase of a 68-acre property along Route 1.

Maine Farmland Trust purchased the property in June 2011. The land had been targeted by Wal-Mart for the development of an 186,800-square-foot supercenter in 2005.

Through the online fundraiser, Hatch and McQuillen raised $33,467, exceeding their goal of raising 25 percent of the $106,000 asking price.

“We both felt honored that people believed in us and felt we were going to be good stewards of the property,” Hatch said.

Hatch and McQuillen will close on the property later this year, once the final conservation easement is in place, ensuring the land will forever remain farmland.

For more information about Morning Dew Farm, find the farm on Facebook or Instagram, or go to morningdeworganic.com.