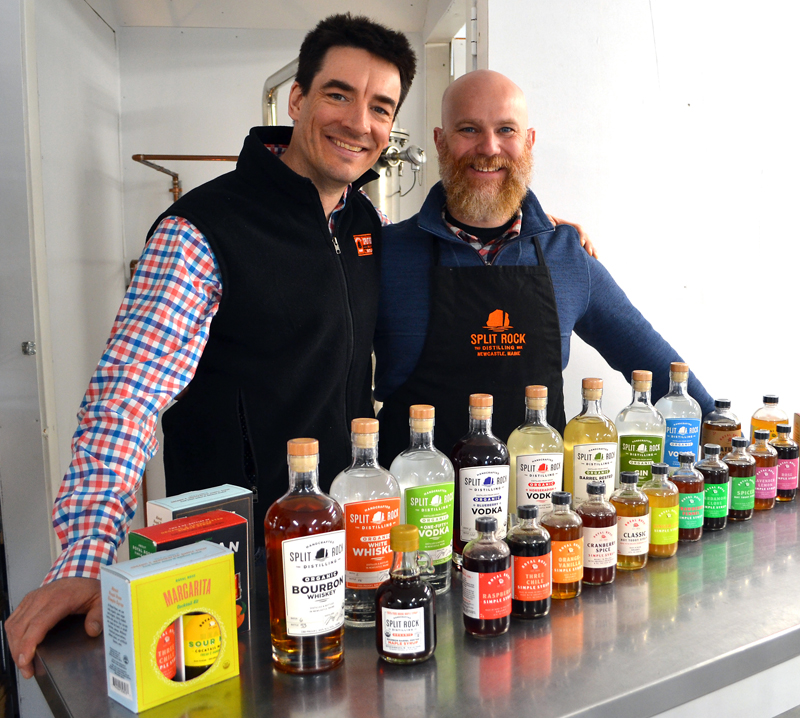 Split Rock Distilling co-owners Topher Mallory and Matt Page now have a new business operating out of the distillery’s headquarters in the red barn at 16 Osprey Point Road in Newcastle.

The friends and entrepreneurs purchased Royal Rose Syrups, an organic simple syrup company, and moved the company from Brunswick to Newcastle earlier this year.

Husband-and-wife team Emily Butters and Forrest Butler founded the company in Brooklyn, N.Y. in 2010. Since then, the company has grown and the syrup is now available in 48 states and 11 countries, Mallory said.

Butters, Butler, and the business later relocated to Maine, and the company was most recently based in Brunswick.

Page and Mallory first became aware of the business in the spring of 2017, when Page ordered a cocktail at Buzz Maine in Damariscotta. After having a taste of the freshly made cocktail, Page asked the bartender if he could see the simple syrup bottle.

“I remember being struck by the flavor, and I wanted to see the ingredients,” Page said. “I looked at the label and realized it was made in Brunswick, and it pretty much floored me that there was another organic company right down the road that we didn’t know about.”

Page texted a photo of the label to Mallory, who, a few days later, called Butters and Butler to see if they would be willing to meet. Mallory visited the Brunswick facility for a tour and returned to Newcastle later that day with boxes of the simple syrups. Throughout the summer of 2017, Split Rock Distilling exclusively used Royal Rose Syrups in the cocktails sold in the tasting room.

Over the holiday season, Page and Mallory were discussing a collaboration with Royal Rose Syrups for an exclusive simple syrup for the distillery. However, the conversation turned when Butters and Butler told the pair they were thinking of selling the business, Mallory said.

“They sprung it on us that they were considering selling the business and that we were their first choice to take it over,” Mallory said. “We were just flattered that they thought we would be good stewards for the product and help take the brand to a next level.”

The fact that Split Rock Distilling spirits are also certified organic by the Maine Organic Farmers and Gardeners Association helped matters, Page said. “It seemed like a natural fit, because they were doing a lot of the same things we do here and had a lot of the same beliefs,” Page said.

In the time between the first conversation in mid-January to closing on the business March 1, Page, Mallory, and the Split Rock Distilling team worked around the clock to prepare the second floor of the barn for the new business.

“It was very reminiscent of how the distillery came together,” Mallory said. “The whole team would be here until 5 or 6, then go home to eat and put the kids to bed before heading back here until 2 in the morning.”

After five round-trips to Brunswick with a U-Haul and two trucks, all of Royal Rose Syrups had been moved to Newcastle, including the company’s two employees.

“We were so fortunate that they both were willing to stay on with the company,” Page said. “They liked what Topher and I were doing … and knowing that we really are huge advocates for our employees and that we all are a team here.”

Page and Mallory are looking to expand the employee roster of both Royal Rose Syrups and Split Rock Distilling as both businesses continue to grow. “We’re really starting to hit our stride, and we’re going to keep going,” Mallory said.

For more information about Royal Rose Syrups, visit royalrosesyrups.com or find the business on Facebook and Instagram.