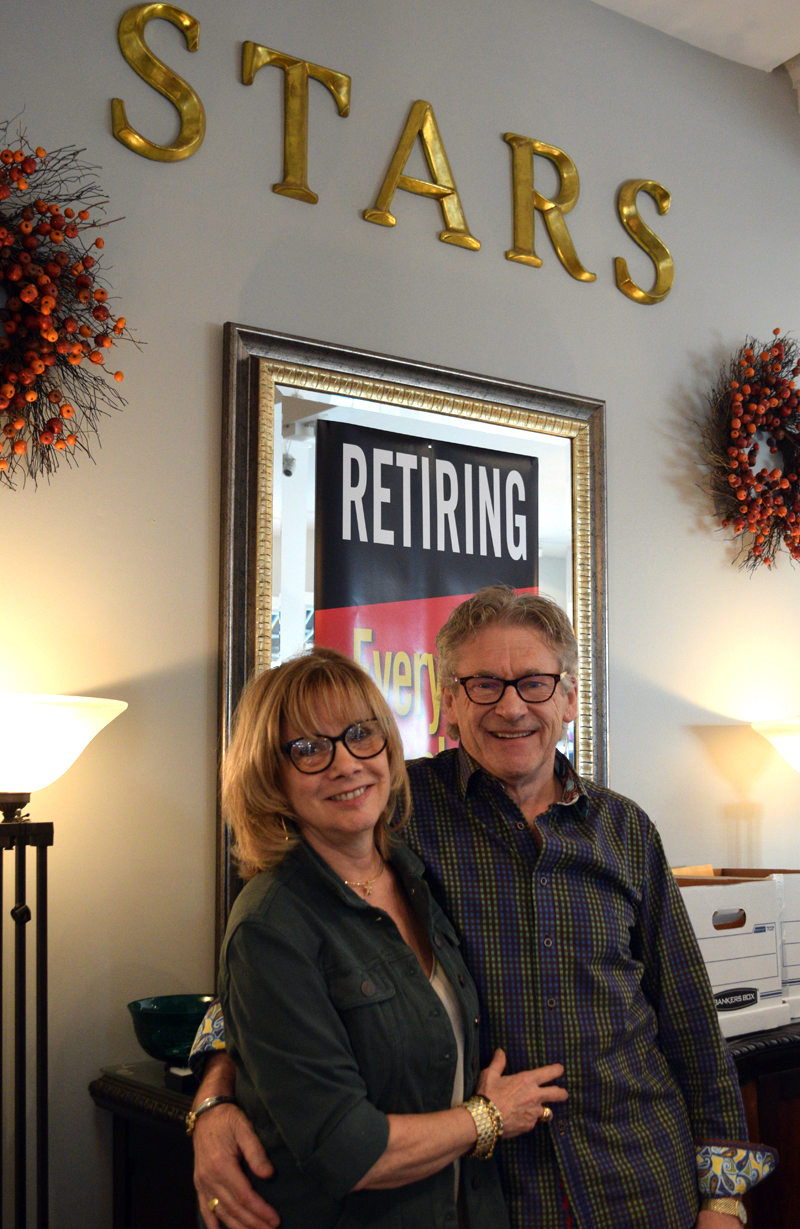 Frieda and John Hanlon stand behind the counter at Stars Fine Jewelry in Damariscotta on Tuesday, Nov. 15. The husband-and-wife owner-operators started the business in 1994 and simply want to step back, relax, and spend more time at home and traveling around Maine now. (Evan Houk photo)

Stars Fine Jewelry, a staple of downtown Damariscotta since 1994, is offering one last Christmas gift to the community before closing — an up to 70% off sale on all the merchandise in the store, co-owner and operator Frieda Hanlon said during an interview on Tuesday, Nov. 15.

“Our last Christmas, a big sale, great discounts, but still the same care that we’ve put into it,” Frieda said, noting her and her husband and business partner, John’s, continuous attentiveness to customers.

Customers can still visit the store, while supplies last, and pick up one of Stars’ iconic little green boxes wrapped in red ribbon as a holiday gift for that special someone. Frieda said that people would tie the boxes and hide them in Christmas trees.

“I can’t tell you how many people said, ‘It wouldn’t be Christmas without a little green box from Stars,’” Frieda said as she held back tears, reminiscing about the business. “We warmed ourselves with thinking how many people’s Christmases we made happy.”

“This is all of us,” Frieda said. “We created Stars, we did everything here and we loved it.”

Frieda and her husband, John Hanlon, have operated the “extremely successful business” for the past 28 years and are simply ready to retire as both are in their 70s. They were essentially the only two full-time employees the entire time they have run the store.

The couple wants to relax and spend time at home, and then start to explore their home state, with Bar Harbor being near the top of the list, Frieda said.

“We’ve had virtually no time off. We want to enjoy Maine,” Frieda said. “We just want to have a quiet life.”

The couple purchased their current building at 65 Main St. in 2004 and gutted the interior. They invested in extensive renovations, including the replacement of three exterior walls and the removal of several sub-floors and two hung ceilings, to get it in shape. Recently, a new roof and new furnace were also installed, Frieda said.

The building and the “shell” of the business, which would include the locally handcrafted mahogany display cases, other equipment, and the Stars Fine Jewelry name, will be listed for sale with Sotheby’s International Realty, Frieda said. 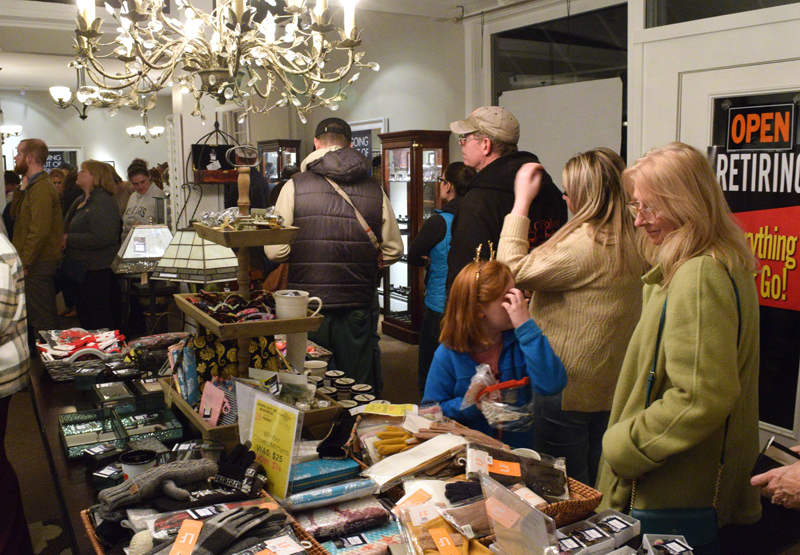 Customers pack Stars Fine Jewelry in downtown Damariscotta for the first night of the store’s retirement sale on Wednesday, Nov. 9. Frieda and John Hanlon, owners and operators since starting the business in 1994, want to step back, relax, and spend more time at home and traveling around Maine. (Evan Houk photo)

“If there’s not that perfect fit, we may have to pass and just sell the building,” Frieda said.

The business of Stars Fine Jewelry has kept growing year after year and has been thriving since the couple first opened a small shop on Theater Street in 1994, where About Face is currently located.

The first sale, of a pair of earrings, was made to Kim Brown, who was pregnant with her daughter, Lydia, at the time. Years later, Lydia’s fiancé, Jonah Cronkhite, would come to Stars to pick out her engagement ring and wedding band, Frieda said.

“That little baby bought her engagement ring and wedding band from us,” Frieda said.

John and Frieda Hanlon met in London in 1992, where John was a longtime resident. The two married and eventually moved back to Boothbay Harbor, where Frieda’s mother lived.

Frieda had bought her first piece of jewelry at 15 and had 12 years of experience in the industry from owning a select secondhand clothing store. The two built the store from the ground up and made it into the success it is today.

“We started with no money, we lived with my mother for four years,” Frieda said. 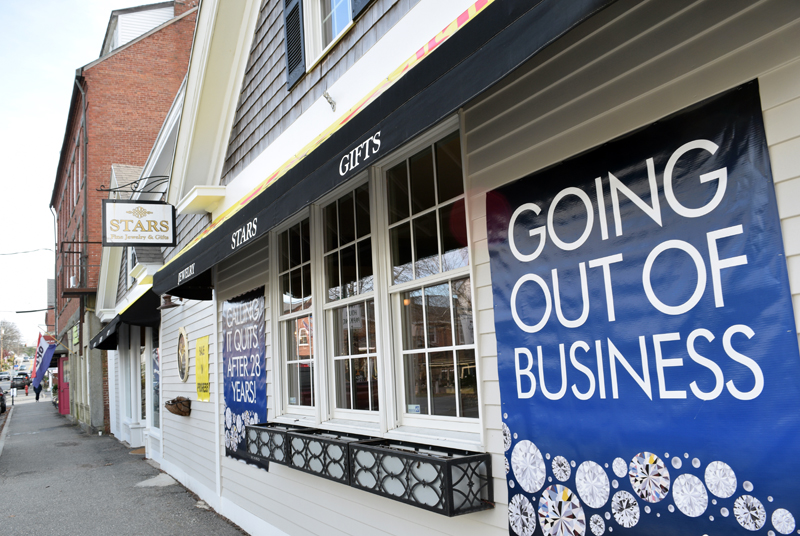 The exterior of Stars Fine Jewelry at 65 Main St. in Damariscotta on Tuesday, Nov. 15. Frieda and John Hanlon, owners and operators since starting the business in 1994, have decided to retire and are selling all the inventory at up to 70% off, while supplies last. (Evan Houk photo)

John said he had never seen stars so beautiful as in Maine and they were looking for something short elegant, and memorable, so the two decided on the name Stars Fine Jewelry.

Frieda said she will miss “the feeling of helping people find something beautiful and meaningful for their occasions in life.” Frieda and John have also taken pride in truly listening to customers and figuring out what they needed.

“When people came in here we tried to translate, to really get at, what it is that they really wanted,” Frieda said.

Frieda said the most fun was helping out men who came into the store looking like deer in headlights, not sure what to do.

“Guys always felt like they were in the wrong place at the wrong time coming into a jewelry store,” Frieda said. “We took pride in trying make, especially our guy customers, relax and laugh.”