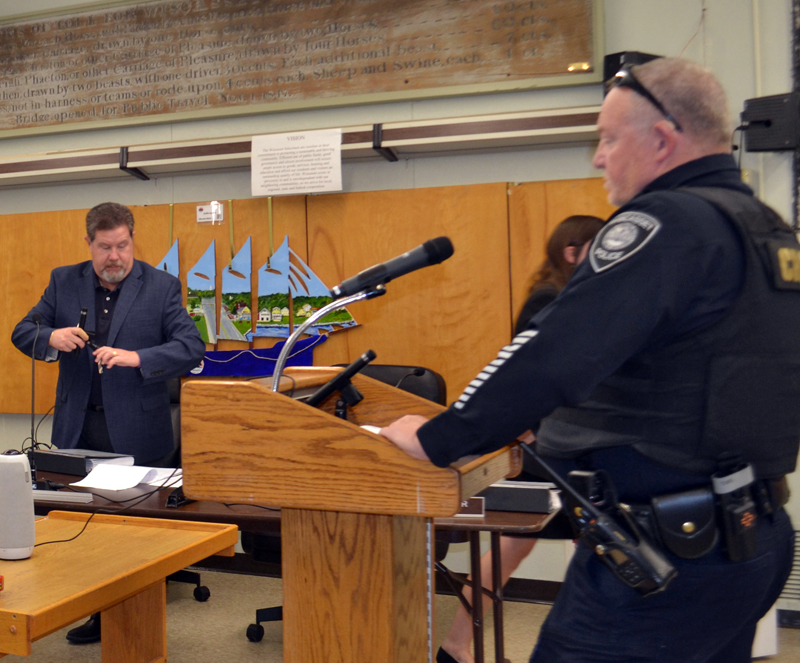 Citing clear and convincing evidence on one side and a lack of any supporting evidence on the other, the State Bureau of Alcoholic Beverages and Lottery Operations overruled the town of Wiscasset last month, granting a liquor license to the owner of the Taste of Orient restaurant.

The state’s decision follows the Wiscasset Select Board’s unanimous decision to deny Cecilio Juntura’s application for a renewed liquor license in August. Juntura timely appealed the town’s denial and the bureau conducted a public hearing on the appeal in Wiscasset on Oct. 13.

Bureau of Alcoholic Beverages and Lottery Operations Deputy Director Timothy R. Poulin conducted the October hearing and issued a written decision on Nov. 16. In the text, Poulin states the bureau must apply “appropriate deference” to factual findings by the town and the bureau can overrule a municipality “only if it finds by clear and convincing evidence that the decision was without justifiable cause.”

The town has the option of appealing the bureau’s decision in district court. On Tuesday, Dec. 13, Wiscasset Town Manager Dennis Simmons said he will certainly follow the direction of the select board, but at press time, as far as he is aware, the town does not plan any further action on the matter.

Simmons said he immediately informed the select board once the decision was handed down and confirmed he has since discussed the findings with Wiscasset Police Chief Larry Hesseltine.

Simmons and Hesseltine both declined comment on the specifics of the case.

At the public hearing on Juntura’s application Aug. 2, Hesseltine strongly opposed renewing Juntura’s liquor license, telling the select board police have been to the Taste of Orient 306 times in the previous five years. Hesseltine said calls specifically requesting law enforcement assistance increased every year, rising from 24 in 2018, to 59 in 2021.

Hesseltine said he was aware of several assaults on police officers at the Taste of Orient and alleged incidences of resisting arrest, and he suggested these issues were related to “over serving” patrons.

In a written decision dated Aug. 3, the Wiscasset Select Board relied on Hesseltine’s statements as the reason for its denial, citing “306 complaints or incidents, including, but not limited to disorderly conduct, operating under the influence, drug offenses, employees being charged with OUI after leaving work and other breaches of the peace … During some of the incidents altercations between patrons and our officers have occurred, resulting our … officers being assaulted.”

In his decision, Poulin notes Juntura and his attorney submitted supporting evidence at the October hearing, including various communications with the town officials, a transcript of the August hearing, and incident reports from the Lincoln County Sheriff’s Office and Wiscasset Police Department.

Wiscasset relied on the record of the August hearing and provided no additional evidence.

Poulin notes that despite Hesseltine’s contention Wiscasset officials were unable to discern which calls were for service at the restaurant or the Schooner Inn, an unaffiliated hotel owned by Juntura that shares the same address as the restaurant, the incident reports submitted by Juntura clearly indicate which business is involved in the call.

According to Poulin’s findings, of the 186 total calls for service reported for the two businesses in the years 2020, 2021, and 2022, 25 involved Taste of Orient. At the October hearing, Hesseltine testified none of those 25 would have had any bearing on the business’s liquor license application.

Poulin reports there is no documentation in the record supporting Hesseltine’s allegations that a Wiscasset police officer was assaulted by a Taste of Orient patron in May 2022, or that there were multiple incidences involving OUI charges against restaurant employees.

“The chief was unable to explain why the town’s decision references alleged OUI arrests of Taste of Orient employees despite the lack of testimony or documentations of such arrests presented at the selectmen hearing,” Poulin said in the decision.

Testifying in support of his application in October, Juntura discussed his knowledge of substance use by patrons of the Schooner Inn. Juntura said it is not easy to expel problematic long-term residents because he is required to follow an eviction process.

Speaking in support of Juntura’s application, Taste of Orient bartender Rhonda Baugess  testified the one OUI incident cited in the town’s Aug. 3 letter involved an individual who was not a restaurant employee, and who had one drink at the bar, four hours prior to the incident.

In another finding, Poulin accepted Juntura’s allegation the town violated public notice requirements by not appropriately advertising the August public hearing, However, since Juntura was able to fully participate in the proceedings and was not otherwise harmed, Poulin states the lack of proper public notice did not factor in the state’s decision.