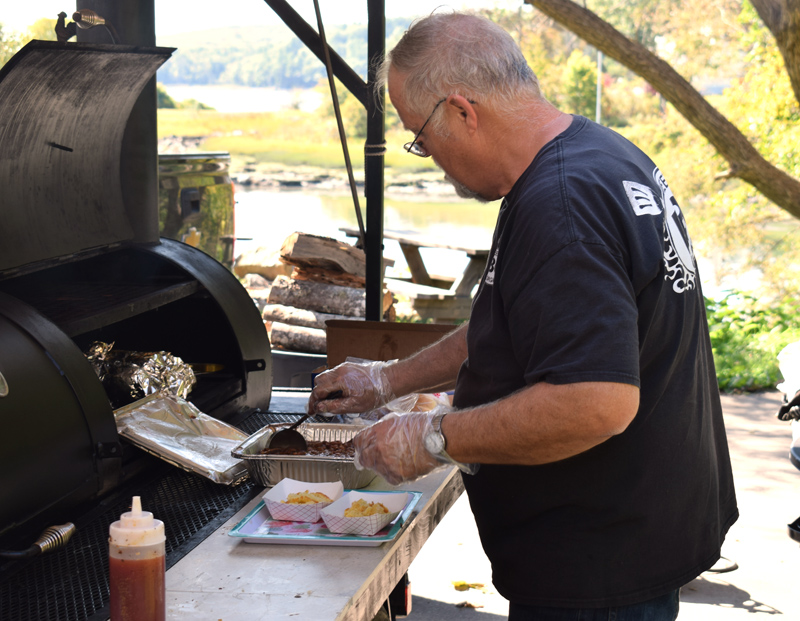 Ken Flower, owner of Sweet Georgia BBQ, prepares a pair of “Hillbilly Sundaes” during the grand opening of his food wagon on Main Street in Newcastle on Friday, Sept. 20. (Evan Houk photo)

Sweet Georgia BBQ, the roadside stand from Bristol, is now open at its new location in downtown Newcastle.

The stand began serving its barbecue lunches, dinners, and sides from a small wood-fired smoker in the parking lot of Milling Around, at 67 Main St., on Friday, Sept. 20.

Owner Ken Flower plans to keep the stand open until after the Damariscotta Pumpkinfest, which runs through Oct. 14.

He will reopen in Newcastle next year around Mother’s Day or Memorial Day, depending on the weather. He does not plan to reopen at his 1955 Bristol Road location in Bristol next year, saying the Newcastle spot is a more central location for customers.

During Pumpkinfest, Sweet Georgia BBQ will only offer sandwiches so the stand can serve customers quicker. 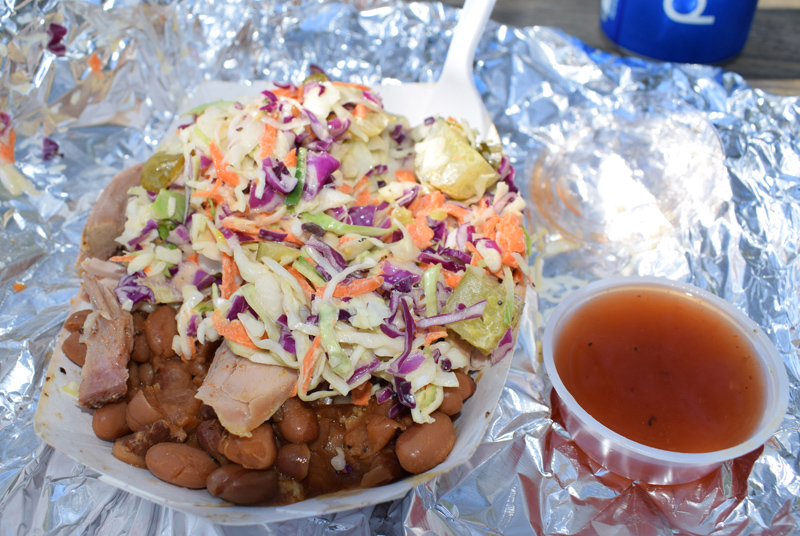 The “Hillbilly Sundae,” with a side of tangy sauce, from the Sweet Georgia BBQ food stand at 67 Main St. in Newcastle. The dish consists of a base of cornbread with layers of baked beans, pulled pork, and coleslaw. (Evan Houk photo)

The “hillbilly sundae” contains a little bit of everything.

This specialty dish starts with a base of crumbled cornbread, layered with baked beans and pulled pork, and topped by homemade coleslaw with pickle chunks.

Ken Flower said he made about 100 pounds of meat for his first day in Newcastle and sold about half of it. He cooks the meat ahead of time in his much larger smoker in Bristol, which can cook 700 pounds of meat at once.

The meat continues to cook on the smaller wood-fired smoker in Newcastle right up until it is served to the customer.

Ken Flower has been running Sweet Georgia BBQ since May 2018 with his grandson, Wyatt Flower, who hopes to turn the stand’s success into a restaurant venture some day. 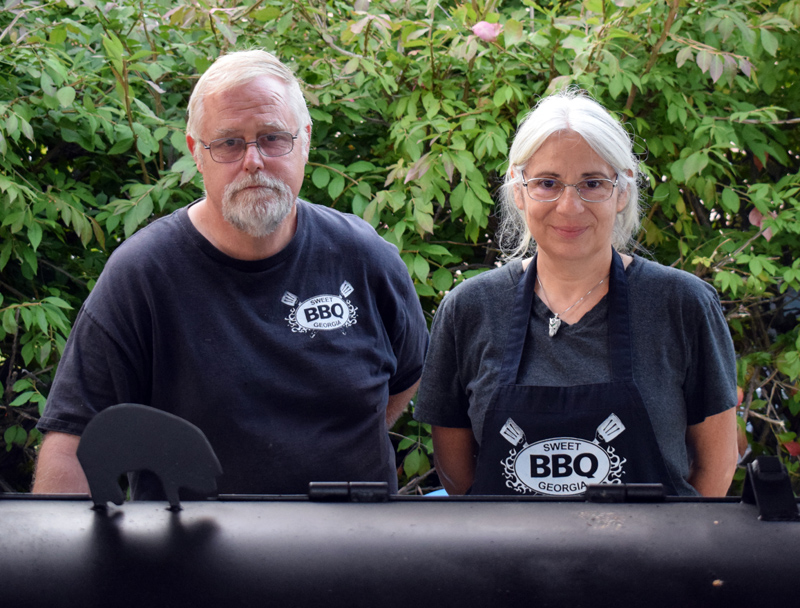 Ken Flower, owner of Sweet Georgia BBQ, stands with Susan Concolino behind his wood-fired smoker. The barbecue stand has moved from Bristol to a new location in the parking lot of Milling Around at 67 Main St. in Newcastle. (Evan Houk photo)

Ken Flower said he hopes to build on his success in Bristol at the downtown Newcastle location, before eventually handing the business off to his grandson.

Susan Concolino, of Bath, who was working at the stand with Ken Flower for the grand opening, said she was filling in for Wyatt Flower while he is going to school at Lincoln Academy. The young chef also takes culinary classes in Bath a few days each week.

Ken Flower said his grandson will begin receiving college credit for the culinary classes when he is a high school senior next year.

Concolino said there was a lot of interest on the first day and some locals appreciated that the food stand is “right around the corner.” She pointed out that the stand is using bamboo containers to be eco-friendly.

She said the short season this year will give the stand time to work out any kinks and adjust to the new location.

The barbecue stand will be open from 11 a.m. to 6 p.m. Friday-Sunday, and possibly Monday, until after Pumpkinfest.