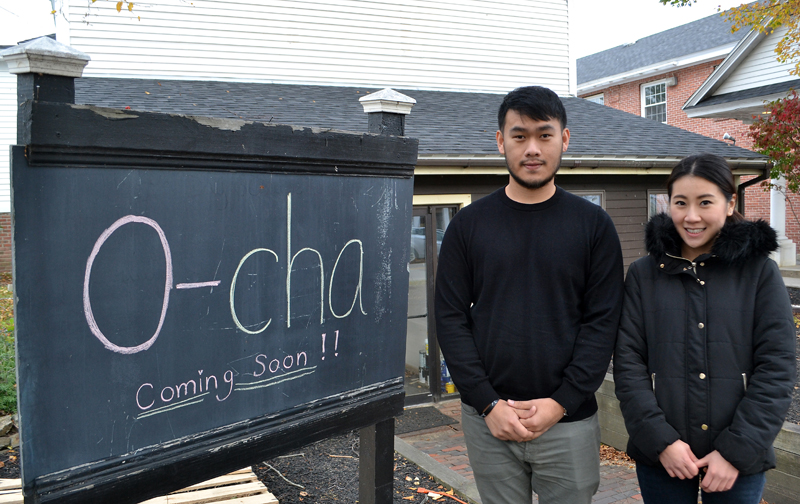 A local restaurateur and son of a Damariscotta restaurant owner will soon open a new, Thai-inspired bar and grill in the former home of Salt Bay Cafe in downtown Damariscotta.

Pongsakorn “Job” Hanjitsuwan, of Wiscasset, plans to open O-Cha at 88 Main St. by mid-December. Loosely translated, the word O-Cha means delicious or to have good flavor, Hanjitsuwan said. It’s a word he commonly saw associated with restaurants and food vendors in Thailand.

Hanjitsuwan and his family came to the U.S. when he was a teenager. His father, Chanint Hanjitsuwan, and sister, Thanyalak Rojpanichkul, opened Best Thai in Damariscotta in 2011.

Hanjitsuwan, who “wasn’t really interested in working in the restaurant,” slowly grew to realize he enjoyed the management aspect of working in the industry and forging new connections with people. When he was 19, he took over the operation of Best Thai II in Bath.

“It took a little bit to convince them to let me do it, but I think they knew I was going to work hard at it,” Hanjitsuwan said. “My family wasn’t rich when we were growing up. My dad is a hardworking man, and that’s something he taught to all of us.”

When his 25th birthday comes around on Saturday, Nov. 11, Hanjitsuwan will have been managing Best Thai II for six years. In that time, he has also purchased and continues to manage rental properties.

“I’m doing what I love, but at the same time, I want to do more,” Hanjitsuwan said.

When Salt Bay Cafe closed in July and the space became available to rent, Hanjitsuwan wasn’t thinking of opening a new restaurant. It wasn’t until he learned the address – 88 Main St. – that he began to consider it.

“The number eight represents infinity, and with two eights, I just believe that it might bring me good luck,” Hanjitsuwan said.

Hanjitsuwan discussed the idea of opening another restaurant with his family, who told him to pursue it.

“My dad especially was very supportive,” Hanjitsuwan said, “which is good, because he’s right next door.”

Hanjitsuwan signed a lease with the building’s landlord, Damariscotta Bank & Trust, on Oct. 1. Since then, the space has undergone substantial renovations, including painting and installation of new flooring and kitchen equipment. Bruce Plourde and Pete Colby handcrafted a new bar for O-Cha.

While the specific offerings will be finalized when O-Cha hires a chef, the menu will feature bar and grill staples, including steak, seafood, and appetizers, with a Thai spin, Hanjitsuwan said.

“We want to bring in something that isn’t here now,” Hanjitsuwan said. “I’ve heard people say, ‘Oh, so it’s a Thai restaurant next to a Thai restaurant,’ but it’s really not going to be. We’ll do our best to provide something different to the community.”

Working with and for the community that has supported his family’s restaurant is very important to Hanjitsuwan, he said.

“We will try our best to support local products and the local economy,” Hanjitsuwan said. “There’s a good community here, and as my family’s done business, I’ve grown to really love it. The people here are very nice, and I’ve never been to a place in the states like it.”

For more information about O-Cha, find the restaurant on Facebook.