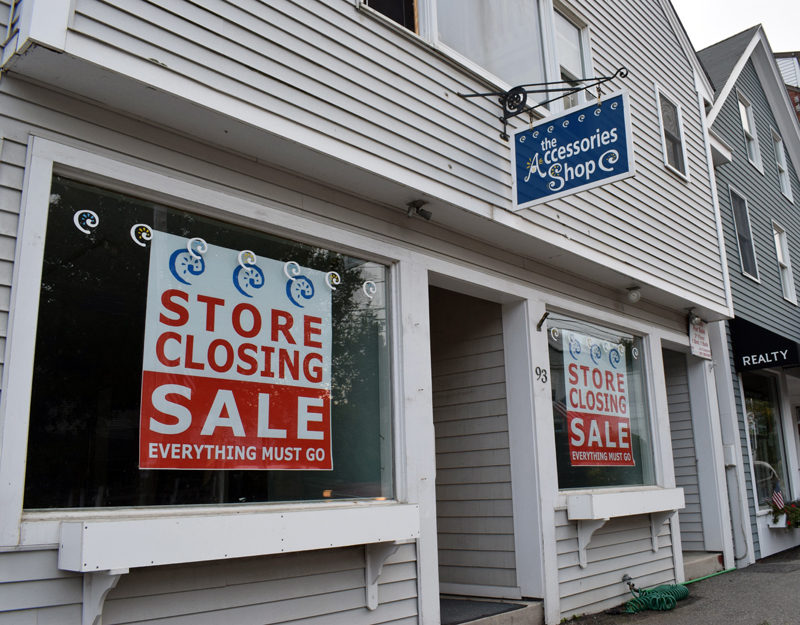 The Accessories Shop, on Main Street in Damariscotta, closed Tuesday, Sept. 8 after about 15 years in town. The owner cited a sharp drop in business due to COVID-19 and resulting restrictions. (Evan Houk photo)

The Accessories Shop closed Tuesday, Sept. 8 after about 15 years in Damariscotta, due to a sharp drop in business brought on by COVID-19 and resulting restrictions.

After not being able to reopen for the season until May, when the shop would usually reopen in March, and seeing sales dip by more than 50% in July and August, owner Melissa Ellinwood decided to pull the plug on the business she bought from her mother, Carolyn Parker, eight years ago.

Before officially shuttering, The Accessories Shop, on Main Street next to the Colby & Gale service station, held a clearance sale with all items 50% off, starting Aug. 31.

In an interview Saturday, Sept. 5, Ellinwood said that although the number of visitors to Damariscotta increased in the past two months, not as many people were visiting her store as usual.

“Yes, there were people around, but they were picking and choosing what they were doing. They were eating outside, getting a sandwich, anything to do outside. They were going for a boat ride, they were going to the beach. Shopping was not one of those things,” Ellinwood said.

She did not see many out-of-state visitors who normally return to the shop every year.

“Just in the last week, I’ve seen people who finally just got to get up here who would normally be here all summer,” she said.

Ellinwood originally did the bookkeeping for her mother at The Accessories Shop and decided to take it over when her son began attending school.

Parker ran an interior design and home accessories shop in Newcastle before moving her operation across the river and creating The Accessories Shop.

“We are a gift store that sells unique items, including table linens, everyday cards, baby gifts, ceramics, glassware, and a variety of other items to enhance your home or cottage,” The Accessories Shop website states.

Ellinwood said traveling to gift shows and dealing with sales representatives from different companies allowed her to keep her unique inventory in stock.

“I definitely tried not to have what everybody else had, which isn’t easy,” she said with a laugh.

She said her most popular items were in the baby department, which featured clothes and toys for babies and young children. She said many people would return to the store looking for their “staple baby gift” whenever a baby was born.

Ellinwood said she will miss the face-to-face interactions with customers the most.

“Just the local, familiar faces. They would just come in and they’d be intrigued by all the colorful variety of the selection of the tablecloths,” Ellinwood said.

She said that after her normal January and February offseason, customers would return in March looking for bright colors, searching for some cheer after the long winter.

She is considering an online-only store, but knows it wouldn’t be the same.

“I haven’t ruled it out. I just have to really take a break and see if that’s really an investment that I want to partake in,” she said.