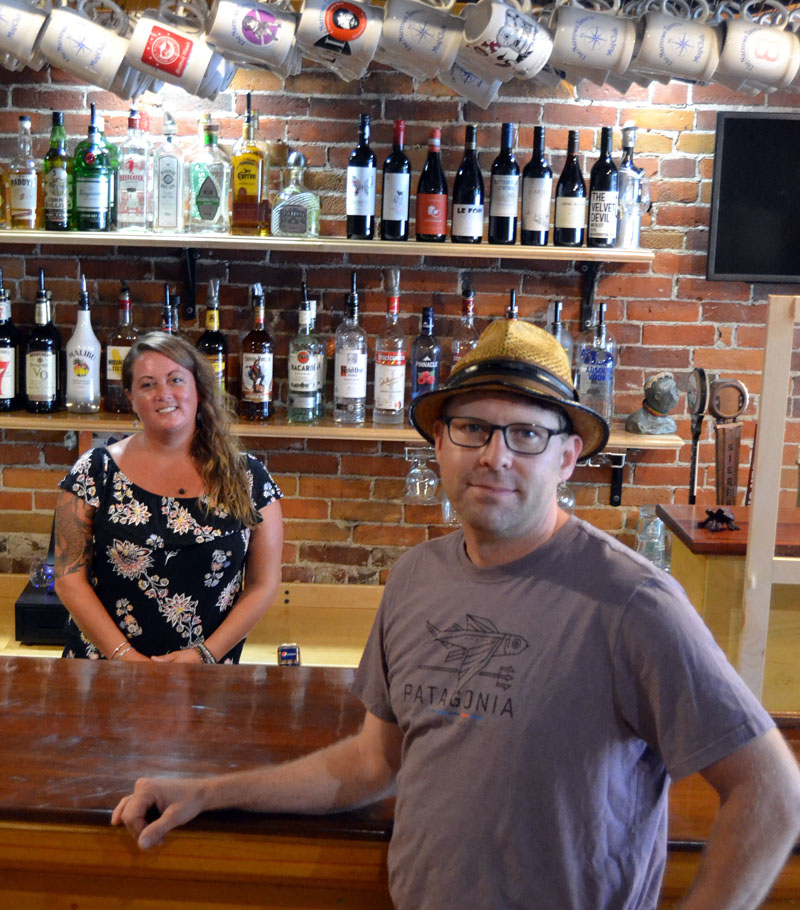 The Narrows Tavern manager Kristen Weeks and owner Jeff Hurd stand near the newly refinished bar in the restaurant. After closing in March due to the COVID-19 emergency, The Narrows will reopen Wednesday, Aug. 5, with a fundraiser for The Waldo Theatre. (Maia Zewert photo)

After closing in late March due to the COVID-19 emergency, The Narrows Tavern in Waldoboro will mark its reopening Wednesday, Aug. 5 with a fundraiser for The Waldo Theatre.

The event will kick off a monthly benefit for local organizations and nonprofits according to Kristen Weeks, manager at The Narrows.

“It’s a perfect fit for the start of this venture, because they are our neighbors in downtown Waldoboro and have been working hard to bring the theater back to life,” Weeks said. “It was a big and vivacious part of the community for so long, and we’re excited to help.”

The Narrows will open at 11:30 a.m. Aug. 5, its first time being open to customers since late March. The fundraiser will take place from 5-9 p.m., with a portion of the proceeds benefiting the theater. A donation jar for The Waldo will also be set up.

During the fundraiser, customers can also enter to win a gift basket filled with items from The Narrows, The Waldo, and Long Winter Soap Co.

Kate Fletcher, executive director of The Waldo Theatre, expressed gratitude for the event.

“We’re excited to see The Narrows open their doors again, and grateful they are making this first event a fundraiser for The Waldo, helping us to finally reopen ours,” Fletcher said.

The monthly fundraiser is not the only new feature The Narrows will debut at its reopening. The restaurant’s staff used the business’s closure to conduct extensive renovation to the dining room, kitchen, and storage areas of the building.

“When this began and the state shut down, we originally decided to have some items for takeout,” Weeks said. “But after five or six days in, we decided to close and take the time to gut the kitchen. After that, one project led to another, and another, and we just kept going.”

The kitchen was “completely gutted,” Weeks explained, and rearranged to allow for better workflow. The work in the dining room included sanding and refinishing the wood floors, sealing the brick wall, and painting. New liquor shelves have been installed behind a refinished bar top. The awning outside the restaurant has also been replaced.

Weeks said this was likely the first time The Narrows has gone through a full renovation since the business opened.

“We’re open 365 days a year, including Thanksgiving and Christmas,” Weeks said. “The only time we close outside of when we lose power is for the annual staff party for Christmas, so there hasn’t really been something like this ever.”

The closure has also allowed for work on the restaurant’s menu, including an expanded wine selection and cocktail specials. Weeks said The Narrows plans to offer Bloody Mary, Bellini, and mimosa specials on Sundays.

“We’re still going to be open our regular Sunday hours, so it won’t be a traditional brunch, but we will, in addition to our normal lunch specials, rotate brunch-type specials as well,” Weeks said.

In compliance with safety orders from the state, The Narrows will require customers to wear masks when they enter, exit, and move around the restaurant. Tables have been relocated to allow for additional space, conducive to social distancing, and will be limited to eight customers per table. Each party will have to provide a name and contact number to the restaurant.

Staff will be masked at all times, and hand sanitizers will be installed in the restaurant and outside the front door, Weeks added.

Both Weeks and Jeff Hurd, owner of The Narrows, expressed excitement about the reopening and changes to the restaurant.

“For me, personally, it will feel like things are getting a little bit better and coming back to normal, even though there’s still a lot going on,” Hurd said. “As long as everyone can follow the guidelines, maybe we can give people this taste of normalcy.”

For more information about The Narrows Tavern, find the business on Facebook or call 832-2210.