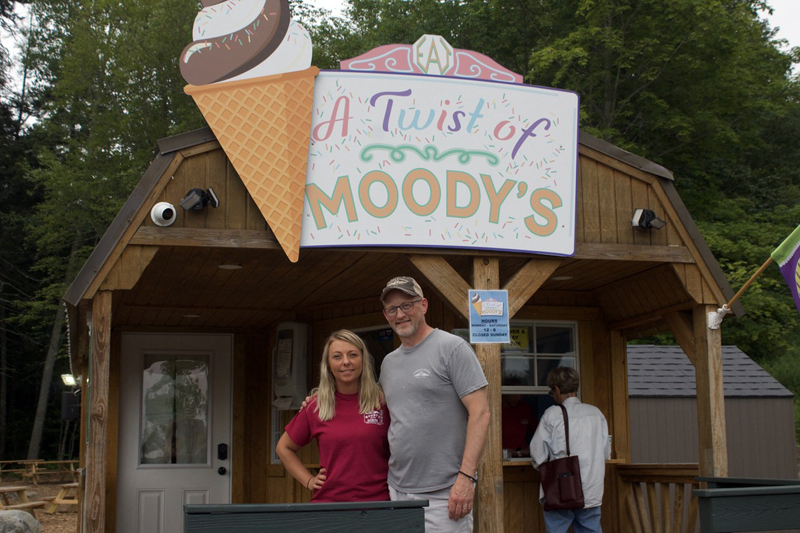 Jessica Beck (left) and Dan Beck stand in front of A Twist of Moodys on July 18. Jessica Beck is the manager of the ice cream stand, an offshoot of Moody’s Diner, which Dan Beck owns. (Iris Pope photo)

For 95 years, Moody’s Diner has been a signature business in Lincoln County. Thousands of customers have experienced the classic diner, dining on homemade baked goods and home cooked meals. The business recently added a new feature to the Moody’s experience – an ice cream stand called A Twist of Moody’s.

“We’ve always thought about having an ice cream stand here,” Beck said. “It got to a point where we realized we have the space, I love ice cream, there’s a building right down the road with all the equipment; let’s try it.”

In addition to opening the ice cream stand, Beck also purchased Moody’s Gifts in January. Now that the diner, gift shop, and ice cream stand are under the same umbrella, customers can have a more universal Moody’s experience. Customers can eat at the diner in the morning, visit the gift shop, and grab a quick cone – plus a doggie dish for a special pet – at A Twist of Moody’s.

A Twist of Moody’s officially opened on June 29 after receiving the go-ahead from the state. Contractors expanded the parking lot and placed wood chips for the picnic table area, and atmospheric stringed lights and music from the decades playing over the speaker builds an enjoyable ambiance for the ice cream customer. While nothing is winterized, Beck said they plan to stay open as long as customers keep coming.

According to Beck, the reception has been quite positive so far, largely regarding their soft serve.

“We had some hiccups with getting all the equipment working right, but I think we’re more into the rhythm now,” Beck said.

“I think you’ll find that while our prices are competitive, we’re using a higher quality soft serve, so you’re kind of getting more bang for the buck,” Beck said.

The soft serve is half the magic of their trademark Twister. While most places offer soft serve mixed with candy, Moody’s combines soft serve with a dessert they are notorious for: pie. Mimicking pie a la mode in a cup, vanilla soft serve is blended with a slice of Moody pie, with flavors including four-berry, apple, strawberry rhubarb, and even strawberry cheesecake.

Both Beck and his daughter-in-law Jessica Beck, manager of A Twist of Moody’s, agree that their favorite order is the four-berry Twister. The sweet and tart combination of the berries has made it a classic two-crust pie at the diner, and an even better addition to vanilla soft serve.

The stand is open Monday through Saturday from noon to 9 p.m., next to Moody’s Diner on Atlantic Highway in Waldoboro.

“We’re here to serve the Midcoast, and just hope that people come out,” Beck said.