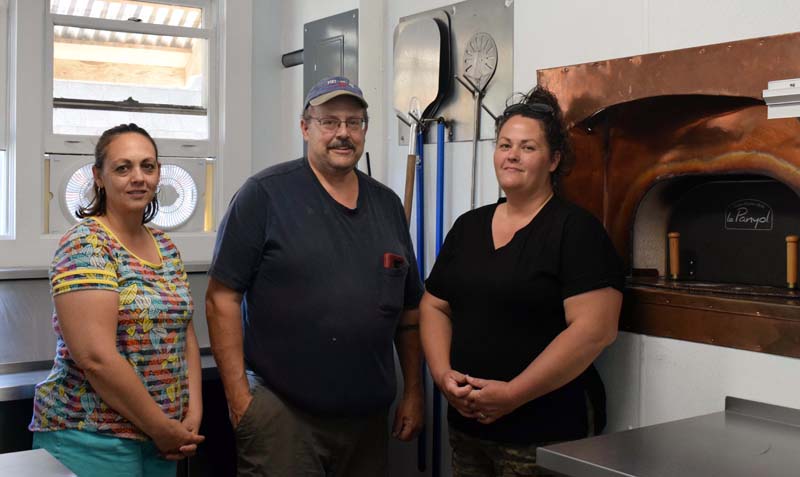 After an expansion and installation of a new oven, The Village Grill Co., of Damariscotta, is now offering wood-fired pizza from its roadside stand at 28 Biscay Road.

The popular eatery, open since 2012, saw record sales in both April and May, and the option of pizza is drawing even more people, said co-owner Paul Blomquist. He said there have been a few nights since starting to serve pizza the week of June 22 that The Village Grill has sold nearly 100 pies.

Blomquist had been giving out free samples of the pizza for a few weeks prior to advertising it in order to garner feedback and perfect the dough recipe.

Blomquist said that after COVID-19 arrived in Lincoln County in mid-March, The Village Grill opened March 31 and was one of the only places in town offering prepared food for takeout, leading to the record sales.

The Village Grill also has an expansive outdoor area with ample distance between picnic tables where customers can enjoy their meals. The grill offers traditional American and Maine fare like burgers, french fries, lobster rolls, and fried seafood, as well as barbecue dinners and creative specials.

As for the wood-fired pizza, it comes in either a 10- or 14-inch size. Options include the “Fraidy Chicken,” “Breezy Caprese,” or “Hog Trifecta.” There is also the option to choose from a multitude of sauces, cheeses, meats, and vegetables to build a unique pizza. 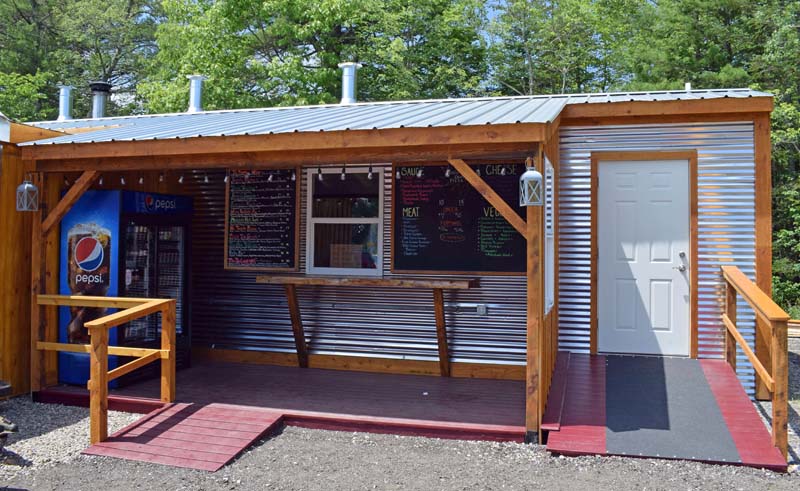 The new addition to The Village Grill Co., at 28 Biscay Road in Damariscotta, features a wood-fired oven for pizza, a separate window that will eventually be exclusively for pizza orders, and a public restroom. (Evan Houk photo)

The expansion of the takeout stand came in the form of a shipping container that has been connected to the original space and retrofitted with the wood-fired pizza oven, kitchen supplies, and a public restroom. Andy Crockett, Missy Crockett’s husband, retrofitted the container, which involved carpentry and masonry work.

Blomquist said the $25,000 Le Panyol oven was assembled in Skowhegan.

The new space has a separate pickup window, which Blomquist hopes to start using strictly for pizza orders, if he can hire a few more employees.

“You can’t get enough help,” he said, referencing the difficulty of finding reliable employees in the area.

Blomquist said the new shipping container is portable and can be moved to a new location if necessary, since he does not own the property at 28 Biscay Road.

Blomquist had wanted to offer wood-fired pizza for three or four years before finally “squeezing the trigger” on the idea last winter. He previously sold pizza at the Twin Village Grill, just down the road in the present-day location of McDonald’s, during the late 1980s and early 1990s.

“It’s funny because we’ve gone from no wood-fired pizza in Damariscotta to three,” Blomquist said, referencing Oysterhead Pizza and the River House, both of which offer wood-fired pizza and opened within the last year.

Blomquist said his Twin Village Grill had the first conveyor pizza oven in the Midcoast and the same oven is still being used at Mike’s Place in Newcastle. 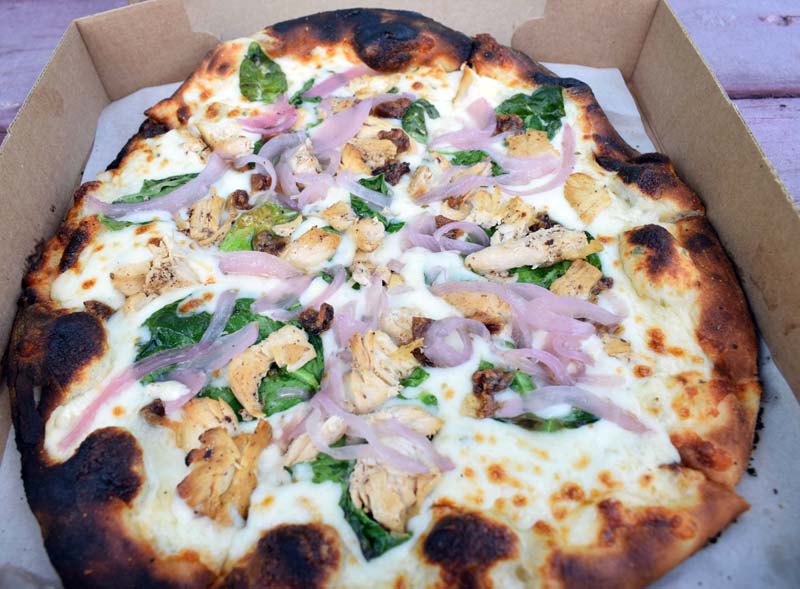 Blomquist recently quit his full-time job as a truck driver with Damariscotta contractor Hagar Enterprises Inc. to focus on The Village Grill and the new wood-fired pizza venture.

He said Spinney and Crockett essentially ran the business for about two years before he decided to step back in.

The Village Grill is observing all COVID-19 precautions. Employees wear face masks, sanitize touch areas every 15-20 minutes, encourage customers to physically distance and wear face masks, and only allow one party on the deck in front of the order window at a time.

Blomquist said he is going to try switching to face shields as personal protective equipment for himself and employees, since a typical face mask becomes too hot in the summer, especially when working with the wood-fired oven.