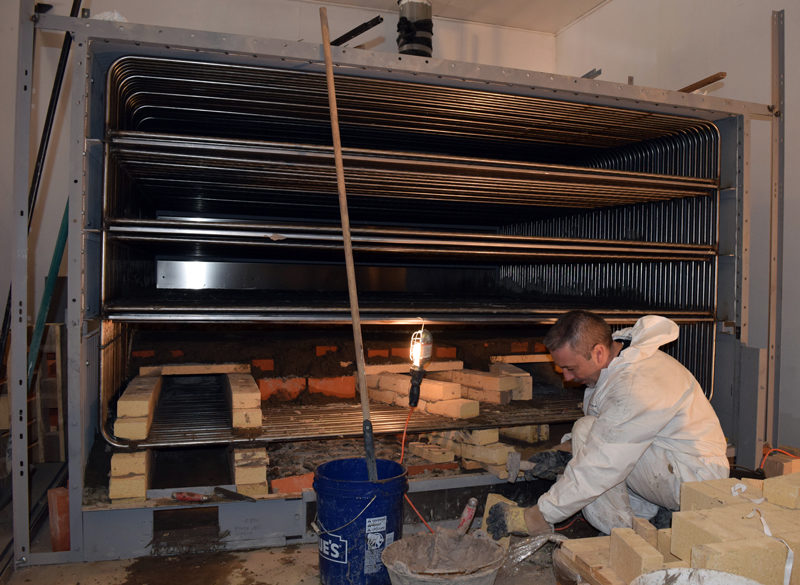 Norbert Creutzer works on the masonry for the new oven at Borealis Breads in Waldoboro on Friday, March 3. Creutzer works for the French manufacturer and traveled to Waldoboro to assemble the oven, a job that includes electrical work, masonry, and welding. (J.W. Oliver photo)

The Borealis Breads bakery in Waldoboro will soon bake its popular breads in a new oven after more than 20 years and 6 million loaves.

Borealis Breads founder Jim Amaral, of Alna, started the business in June 1993 with two pizza ovens in the basement of the Pine Cone Cafe in downtown Waldoboro. The maximum capacity of each oven was 15 loaves.

The next summer, he added two more pizza ovens. In 1995, he bought the bakery’s present-day location at the intersection of Route 1 and Washington Road. In need of a new oven with more capacity, he turned to a French design around since the 1940s.

The breads bake at a temperature of 450-500 degrees. The right oven needs to distribute this temperature evenly and stay hot when bakers load it to capacity: 200 loaves.

The French steam-injected deck oven meets this specification. It also holds steam, which helps create a crispy crust. Steam tends to leak out of other ovens, according to Amaral. The oven is easy and efficient to operate, as bakers can load 20-24 loaves at a time.

When it was time to replace the bakery’s original oven, Amaral wanted the same piece of equipment, and once again turned to France. “I don’t know of any companies in the U.S. that are making this type of oven,” he said.

The oven was manufactured in France and shipped to Waldoboro in pieces.

Two technicians, one from the French manufacturer and another from the Quebec distributor, started work on the oven’s assembly and construction Thursday, March 2 and will work for about 10 straight days to complete the project.

Norbert Creutzer, of France, and Didier Serra, of Quebec, are craftsmen skilled in electrical work, masonry, and welding, all of which go into the assembly and construction of the oven. The oven uses literal bricks and mortar, which they must build in place.

Once the project is complete, the bakery will turn the oven on at a low temperature and gradually turn it up to cure the mortar.

The total downtime is almost a month for the demolition of the old oven, assembly and construction of the new oven, and curing of the mortar. Amaral expects it to be ready for use the third week of March.

When complete, the oven will stand 7.5 feet high and measure 14.25 feet long by 10.5 feet wide. It is one of only two of its kind in the state, to Amaral’s knowledge. Standard Baking Co., of Portland, has the other. 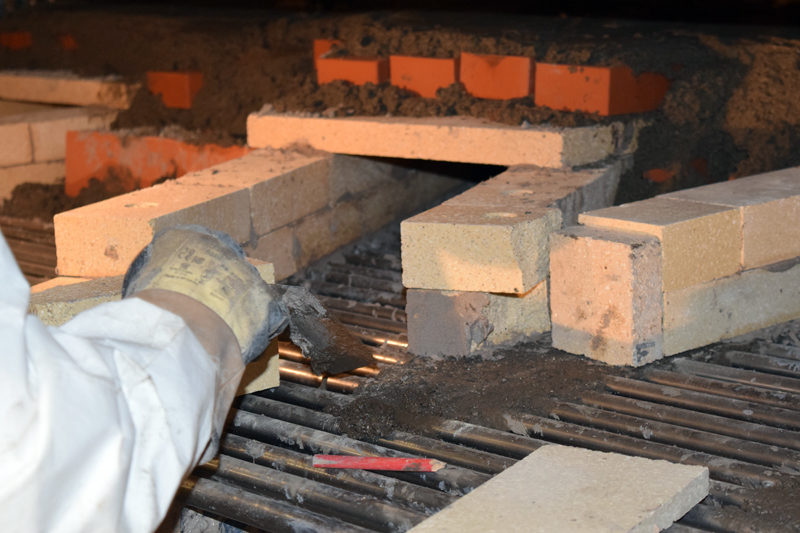 Norbert Creutzer works on the masonry in the new oven at Borealis Breads in Waldoboro. (J.W. Oliver photo)

One of the oven’s most important features is its reliability. When Borealis bakers have a batch of bread ready to go in the oven, there’s no time to troubleshoot.

Fours Fringand manufactures the ovens at a factory in the village of Illange in Northeast France. “Fours” is the French word for “ovens.” The distributor is Pro-Pat Inc., of Quebec.

The oven represents a commitment to the business: once it’s in place, it’s not going anywhere. It took workers three days to disassemble the old oven and jackhammer the mortar out. Amaral hopes to get 20-30 years out of the new oven.

More than 6 million loaves came out of the old oven.

“It is a mind-boggling number when you think of all our small, local accounts that are using our bread on a daily basis,” Amaral said.

The Waldoboro bakery – Borealis also has a location in Wells – delivers bread along the coast from Brunswick to Mount Desert Island, as well as inland to Bangor, Lewiston, and the surrounding areas, but most of its accounts are in small coastal towns.

The bakery was the first in the state to search out and work with Maine farmers in an effort to use Maine grains, according to Amaral. Aurora Mills & Farm, of Linneus, supplies most of the grains for Borealis Breads.

Amaral expects to use 60,000 pounds of Maine-grown grains this year.

Borealis Breads are simple, according to Amaral. “The breads don’t have a lot of dairy products or oils or sweeteners,” he said. Most varieties have only four ingredients: flour, water, salt, and sourdough starter.

While the right equipment and the right ingredients are important, the most important thing is to have the right staff to make the bread, and Borealis Breads is fortunate to have employees who take pride in their work, Amaral said.

The Waldoboro bakery’s production ranges from more than 2,000 loaves a day on busy Fridays in July and August to 700-1,200 loaves at slower times of the year.

The Wells bakery is picking up the slack during the construction of the new oven. The Waldoboro storefront remains open and the bakery continues to deliver breads to its customers.