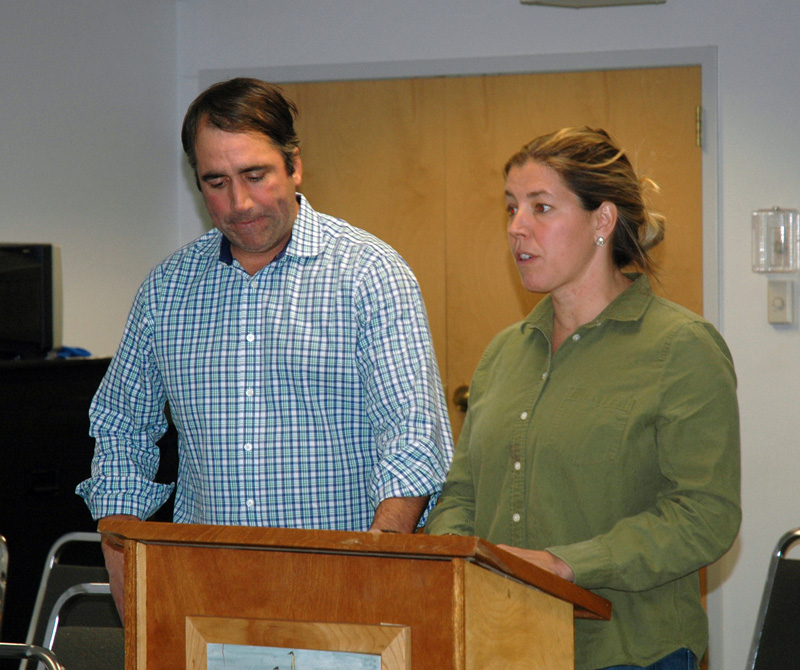 Josh and Sarah Pike discuss their Tops’l Farm with the Waldoboro Planning Board on Wednesday, Nov. 8. (Alexander Violo photo)

A proposal for a campground and event center with an agricultural focus received after-the-fact approval from the Waldoboro Planning Board on Wednesday, Nov. 8.

The board voted 3-2 to approve the application from Tops’l Farm, at 364 Bremen Road, with a number of conditions. Planning board members Barbara Boardman and Sara Hotchkiss cast the dissenting votes.

According to Tops’l Farm’s website, the business is a camp and farm retreat on 83 acres of pasture and woodland near the Medomak River.

Josh Pike initially appeared before the planning board in April 2016 to discuss his plans for the property. The property is split by Route 32, with 30 acres on the river side of the road and an additional 50 on the inland side.

At the initial meeting, a pre-application review, Josh Pike discussed the goal of environmental tourism at the property supplementing income from the family’s small farm.

According to Josh Pike, after discussions with Emily Reinholt, then Waldoboro’s director of planning and development, the couple proceeded with the understanding that a site plan review was not necessary for the project.

“We were acting in good faith based on advice we received from the town at the time,” Pike said.

After construction of the barn at the site, the issue was raised with the planning board and the couple was asked to come in for an after-the-fact site plan review.

Josh Pike said the couple and their children winters in Portland and summers in Waldoboro.

He said the business’s season runs from May to October, but they are open to doing things in the winter if there is interest in the future.

“As business owners and entrepreneurs, we want to take it one step at a time and get our feet underneath us first,” Sarah Pike said.

Hotchkiss inquired about the nature of the farm.

Josh Pike said that while the family intends to have only a few animals, enough to provide the family with fresh goods, the agrarian nature of the property is key to its attractiveness as an ecotourism camping spot and event center.

“The farm is a critical part. It creates the experience,” Josh Pike said.

“The point is to provide food for our family, but I think there is a lot of desire in people to have an organic experience … We want to create the infrastructure where people want to come and stay,” Sarah Pike said.

Sarah Pike said the campground portion of the business is licensed through the state.

During the discussion on the site plan review, Boardman and Hotchkiss expressed concern about the presence of the barn and related activities in a residential district.

Hotchkiss said the presence of the business in a residential district should be considered by the board after the community response to a proposal for a tavern at Kaler’s Corner. The developer of the tavern later pulled his application.

“I feel kind of sensitive to this because, in the previous application, the neighbors were really concerned,” Hotchkiss said.

Boardman said she did not want to set a precedent with the board’s decision.

Simpson said that though the barn is in the residential district, the campground portion of the property is in the town’s rural district.

Prior to the board’s vote, public comment was read into the record by Max Johnstone, of Midcoast Economic Development District, which provides planning services to the town.

The only comment came from the abutting German church and cemetery, which expressed concern over the proximity of the business’s parking to the cemetery. The church is especially concerned about the impact of the parking lot on its ability to sell plots in a currently unused portion of the cemetery.

Josh Pike said the couple originally intended to locate the majority of the operation on the river side of the property, but due to concerns about a barn in close proximity to the river, they moved the structure to the inland side.