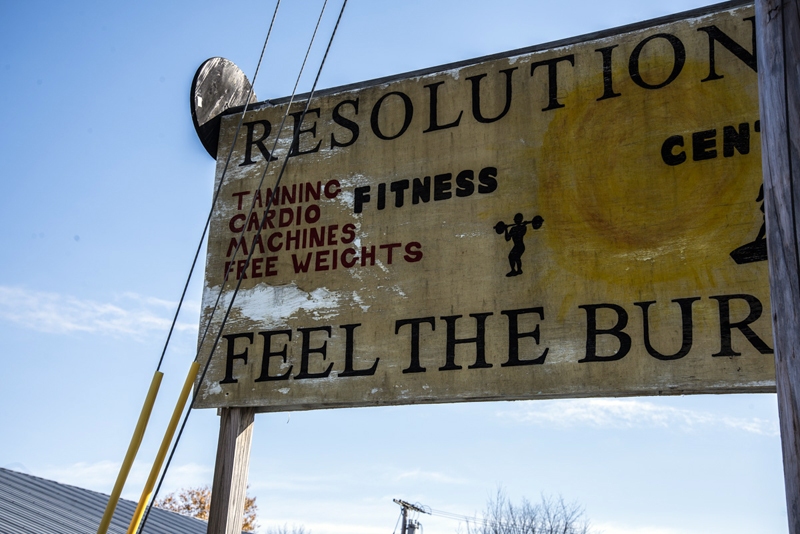 Resolutions Fitness Center, on Winslows Mills Road in Waldoboro, permanently closed Saturday, Oct. 24. Owners Leslie and Evelyn Crouse opened their gym in 2015, with 92 members inherited from the previous business. Over the past five years they had built the membership rolls to approximately 250. But the closure of fitness centers and gyms in response to the COVID-19 pandemic ravaged their business.

On March 16,  as the coronavirus arrived in Maine, Resolutions posted to its Facebook page that it would “remain open for now.”

“Our staff is taking every precaution possible to keep things sanitized and clean. … Let’s try to not panic with this and keep things as normal as we can, keep our hands washed and if (you’re) sick please stay home,” the center said in a post. The next day, it closed.

The Crouses originally planned to close for at least two weeks. Throughout the closure, they kept in close contact with members. On March 24, the center posted an update, saying the governor had asked fitness centers to stay closed until April 8. On March 31, the center posted that it would stay closed “till further notice.” On April 1, it posted, “We really need to get rid of this virus fast.” There were more delays on April 15, April 28, May 19, and June 1.

As the weeks went by, despite hopeful updates on Facebook, the exercise equipment sat unused, memberships were canceled, and the business was struggling to remain viable. Challenges for the fitness industry, enumerated in Maine’s guidance on reopening, included risk of exposure from close physical proximity during exercise, projection of respiratory particles during cardiovascular activities, and the incompatibility of face masks with many common workout activities.

When the state finally lifted restrictions on fitness centers during the second phase of its plan to restart the economy, Resolutions reopened June 12 with precautions in place. But the damage was done. The center lost its senior clientele first — retirees who came in the mornings to exercise and socialize in equal measure.  Those 60 and over are considered at increased risk from the coronavirus and, according to Leslie Crouse, 95% of the gym’s members in that age group did not return.

Then Resolutions lost its core customers — those people focused on fitness who, when faced with the uncertainty of the pandemic and the limitations still placed on gyms, bought their own equipment and no longer needed a membership. While continuing members were glad to see Resolutions reopen, too few came back and there were very few new members. Membership dropped into the low 80s. Leslie Crouse said they needed at least 150 members to stay open.

On Sept. 24, the Crouses made the difficult decision to close Resolutions for good. “We want to thank all our members for our past few years,” they said in a Facebook post. “You all have been awesome and we really hate having to do this. Hope everyone stays safe and healthy.”

The Crouses have had offers to lease the space or buy the building. A number of people are interested in the exercise equipment too. But, Leslie Crouse said,  “Right now we just want to be able to close and think about it.”

Leslie Crouse believes Resolutions might have survived despite the pandemic. Even with limitations on the number of people allowed in the building, the center may have been able to sustain its membership. But losing those core members during the closure felt like too much to overcome. “In my personal opinion,” he said, “if we didn’t have to close, if we had just had to adhere to social distancing, I think we would have been OK.”