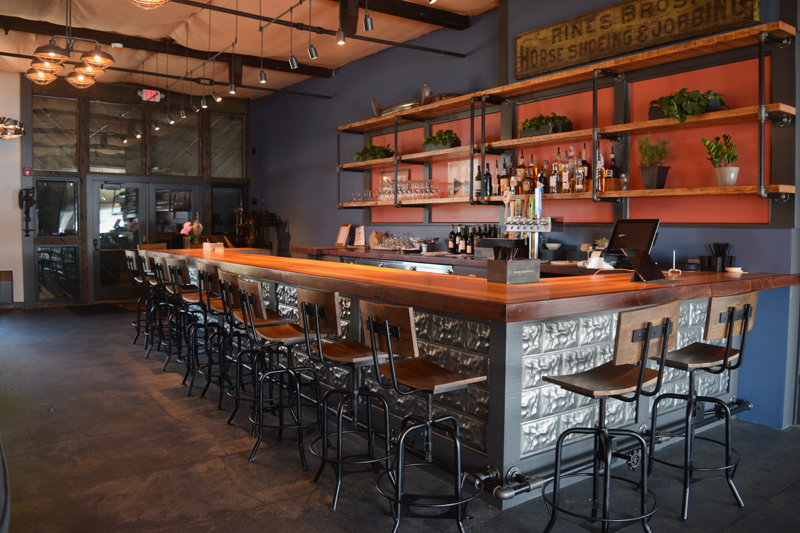 The bar at the new Water Street Kitchen and Bar. (Jessica Clifford photo)

The Water Street Kitchen and Bar, a new restaurant with a focus on Mediterranean flavors, opened in the former location of Le Garage in Wiscasset on Thursday, June 27.

After renovations, the aesthetic of the restaurant’s interior is modern, yet honors the space’s former uses.

Colburn previously worked in the kitchen at The Daily Catch, a Sicilian seafood restaurant in Seaport, Mass., and then as a chef at the Brookline location of The Daily Catch.

The first-time restaurant owner will use the spacious three-floor building to serve a mixture of Mediterranean-centered foods.

“The main menu is basically Mediterranean flavors, focused on some classic Italian pasta dishes … and a little bit of influence from Greece,” Colburn said.

The menu also offers the “flair and flavors” from Colburn’s family. His mother is Puerto Rican and Portuguese, while his father’s family is “basically Mayflower descendants from New England.” 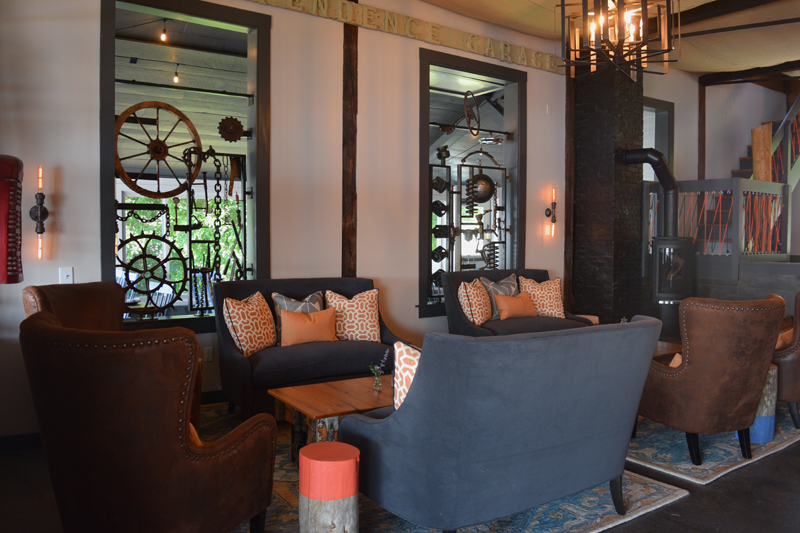 “Our plan is to be one of the main destination restaurants along Route 1 going north of Portland,” he said.

The restaurant currently has one menu for lunch and dinner, but Colburn plans to add a separate lunch menu and a bar menu in the future.

Colburn’s favorite dish to make is paella, which he has spent a year trying to perfect.

“We put on the menu that it takes 35 minutes. We cook it from scratch, for every single order,” he said.

“It’s also the one when you order it, it comes in a pan, so everybody sees it steaming” when a server walks by, Colburn said. “It’s got a little bit of curb appeal to it.”

Some of the renovations to the building include painting, replacing carpet with hardwood flooring on part of the ground level, and refinishing the flooring in the entrance, which dates to the building’s days as an auto garage.

A major project was adding a large bar with a hardwood surface near the entrance, where more tables and chairs once were.

The restaurant has a modern and industrial aesthetic, while “paying homage to what it used to be,” Colburn said. 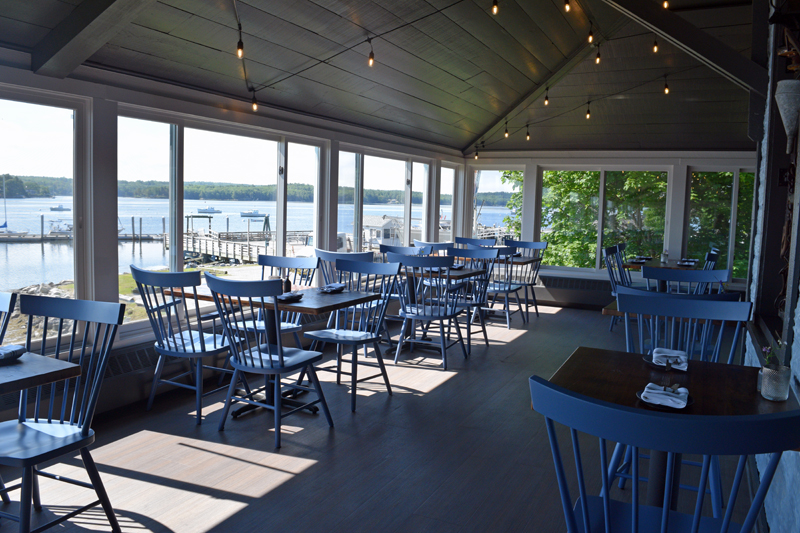 Part of the seating area at Water Street Kitchen and Bar, with a view of the Sheepscot River. (Jessica Clifford photo)

The building at 15 Water St. has a long past. It started out as Rines Bros. Horse Shoeing and Jobbing before becoming an auto shop, then Le Garage.

Some of the knick-knacks from the various iterations of the building are still present, including a sign from Rines Bros., while chairs from Le Garage were repainted for use in the new restaurant.

The history separates Water Street Kitchen and Bar from other restaurants, as well as the view of the Sheepscot River, which Colburn said “speaks for itself.”

Nate Hicks, of Fishbone Metal Works in South Portland, came in and created eclectic sculptures with metal objects, such as a metal saw and farm equipment from Colburn’s grandfather.

“We did not know quite what to expect when we gave him a pile of metal and told him to make sculptures in three windows, but he came in and installed them and we were blown away,” Colburn said.

The sculptures create a boundary between the bar and lounge area and the dining area. 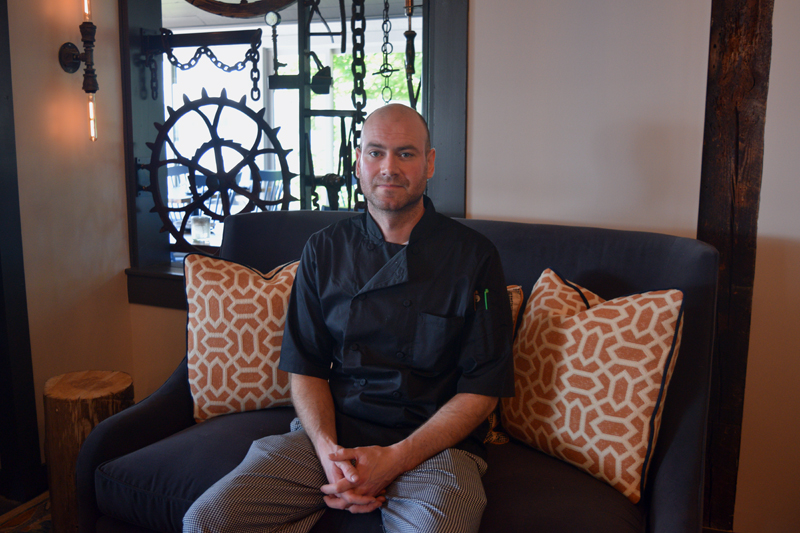 Chef-owner Ed Colburn opened the new restaurant at 15 Water St. in Wiscasset on Thursday, June 27, after buying the building from the former owner of Le Garage in February. (Jessica Clifford photo)

The downstairs of the restaurant was not renovated before opening because it still needs to be brought up to fire code, Colburn said. This area, which has a second bar, is not yet open.

Colburn expects the “casual” space to become a hangout with pool tables and a large-screen television. He is not sure when these renovations will happen.

“The locals really liked the downstairs bar, so that’s one of the things we are trying to open as soon as we can,” he said.

The upstairs of the restaurant is being used for offices and storage space.

The biggest decision for Colburn was less tangible – whether to change the restaurant’s name.

“That was, honestly, the hardest decision I had to make, was whether or not to change the name,” Colburn said.

One reason he did not keep the name is because the name Le Garage is French, and he does not cook French food. 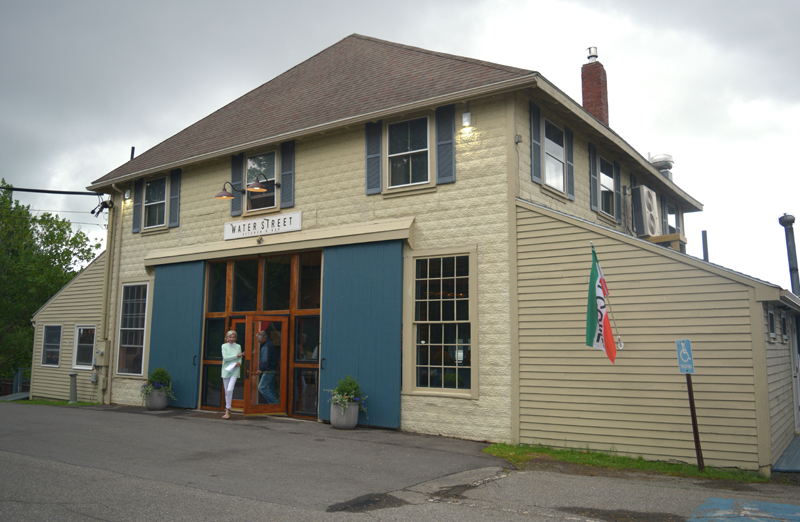 Support from the previous owner and from people on social media made Colburn feel confident in his decision to switch the name.

The restaurant has about 20 employees. Most are from Wiscasset, with a few from the Bath and Damariscotta areas. The general manager of the restaurant is Shane McCarthy, who worked with Colburn at a restaurant in Boston for a few years. Colburn doubles as chef and owner.

The restaurant had a strong turnout on opening day, serving 175 people.

“It was mostly locals. It didn’t seem like there were a lot of tourists. It was the people that really loved Le Garage and wanted to come out and support us,” he said.

The feedback on opening day included a lot of community support and compliments on the renovations, Colburn said.

Water Street Kitchen and Bar will be open year-round, minus the month of January.

The restaurant will be open from 11:30 a.m. to 10 p.m. every day for the first few weeks. In the future, Colburn said, it may be closed one day a week.

In addition to lunch and dinner, Colburn is hoping to serve brunch one morning during the weekend.

Reservations are suggested. To make a reservation, call 687-8076.