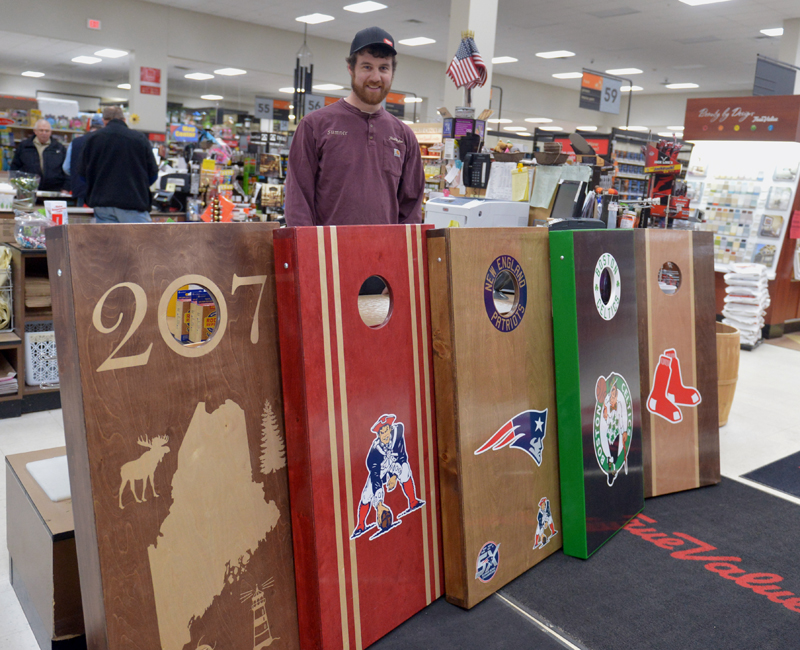 Sumner Averill, of Laid Back Lumber, has been making cornhole games for three years in Wiscasset. He sells them at the family business, Ames Supply in Wiscasset. (Paula Roberts photo)

Yesterday’s simple pastime of bean-bag toss has been transformed into the competitive and popular lawn sport of cornhole. Sumner Averill, owner of Laid Back Lumber in Wiscasset, got into making cornhole games quite by accident.

Averill had been making wooden picnic tables, Adirondack chairs, and flower boxes for two years and selling them at his family’s business, Ames Supply in Wiscasset, when he decided to try selling his wares at Union Fair. There he met former Union resident Bruce Taylor, who has a camp in Union.

Taylor approached Averill and asked him if he was interested in making cornhole games. Thus a business partnership was formed.

Taylor owns Wicked Cornhole in Massachusetts. Averill makes the games and Taylor finishes them off with Maine and New England themes – mostly sports-related.

Averill, a 2009 graduate of Wiscasset High School, grew up in the family business owned by his father, Wayne, and family members Jeff and Steve. He started working there at age 11 or 12 and has been full-time since graduating from high school.

Averill makes his cornhole games out of fine birch plywood and local pine from Robbins Lumber. He turned a portion of the old Ames Supply building into a workshop for his woodworking business.

Averill estimated that he has sold 300-400 sets of cornhole games in the past three years. “Every year we do more and more,” he said.

The big sellers in Wiscasset are the Maine and sports-themed motifs, but Averill also makes custom boards, which are becoming increasingly popular. He has made boards with pictures of someone’s boat, names, the colors and logos of other sports teams, comic book characters, and other themes. “Giving them as wedding presents with their names and wedding date” is becoming popular, he said.

He said his busiest time of the year is spring and summer, and, of course, before Christmas.

Averill said the difference between his boards and others is “they are made in Maine and are good quality.”

Ames Supply held a cornhole tournament in October and 30 teams showed up to battle for the $1,000 cash prize.

“We had teams from Massachusetts come up and play,” Averill said. He said the tournament was a way to introduce cornhole to the Midcoast.

The game got its name because it originated in the Midwest and the bags were originally filled with dried corn instead of plastic pellets.

Averill’s cornhole games can be seen and purchased at Ames Supply, on Route 1 in Wiscasset. The cost of a finished set, which includes two game boards and eight bean bags, is $269. An unfinished set is $169. Extra bean bags cost $45 for a set of eight (four of each color). Custom boards cost “a little bit more,” Averill said.