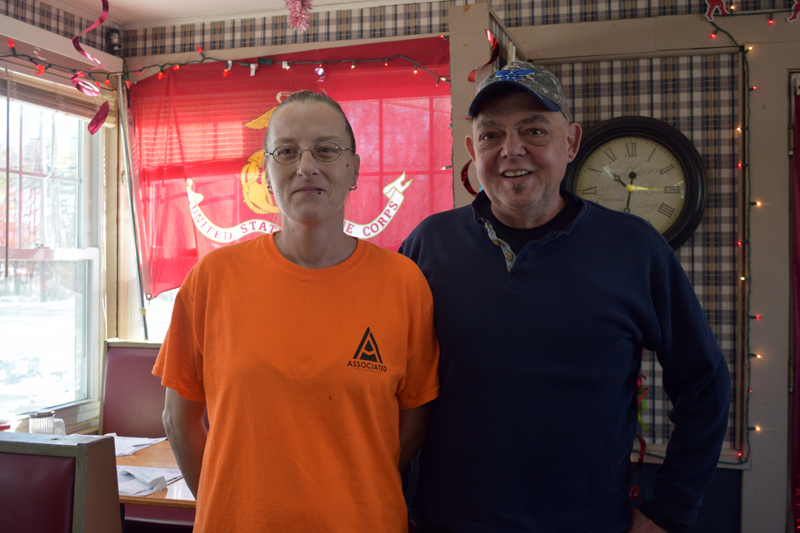 Tarah Diffin and Lenny Santos, of Dresden, are leasing the Ship’s Chow Hall building on Route 1 in Wiscasset and changing things up at the restaurant with a new name, The Hot Spot Diner. (Jessica Clifford photo)

The new proprietors of the former Ship’s Chow Hall, on Route 1 in Wiscasset, are reinventing the restaurant as The Hot Spot Diner, serving breakfast, lunch, and dinner.

Tarah Diffin and Lenny Santos, both of Dresden, are leasing the space from the building’s new owner, Jim Duffy, of New Jersey.

Diffin and Santos had been working at Ship’s Chow Hall for the last three years. Duffy “wanted us to stay here if he were to purchase it,” Santos said.

The former owner of the Ship’s Chow Hall building and former proprietor of the restaurant, Tina Fitzsimmons, has health issues and sold the building.

Fitzsimmons and Santos owned and operated Ship’s Chow Hall II, in Dresden, until it closed in 2017.

Now, Diffin and Santos intend to change things up at the Wiscasset diner, while keeping certain beloved aspects the same. Together, the pair has decades of restaurant experience.

They changed the name of the diner in early February. A temporary sign on the entrance bears the new name.

“This used to be a really hopping place. There used to be lines going outside,” Santos said, and seven people worked at the diner.

Diffin and Santos want to bring the people back.

According to Diffin, there are plans to build a porch on one side of the building for outdoor seating, as well as to paint inside and outside. A new, permanent sign is being made.

The Ship’s Chow Hall menu is still in use for now. It will get some tweaks, but The Hot Spot will serve the same home-cooked food. Santos expects to roll out new menus the week of Feb. 23-29.

A number of years after the location last served dinner, The Hot Spot Diner will bring it back a few nights a week.

Ship’s Chow Hall served dinner when it first opened in 2005, according to Santos, and the Dresden location served dinner for three years. Santos has a background as a dinner chef.

Diffin expects to have a few options for dinner entrees that will change each night. Dinner will be offered only a few nights a week. The Hot Spot Diner’s first night for dinner will be St. Patrick’s Day, Tuesday, March 17.

Some dishes they plan to make include prime rib, stuffed haddock, and Italian cuisine. According to Santos, they plan to base dinner entrees on a new theme each month, such as Mardi Gras.

Many customers want fried food, Santos said, but the diner does not have a frialator. Ship’s Chow Hall had a frialator around six years ago and they plan to get another. This would allow them to offer new menu options, such as chicken tenders and french fries.

At this time, the business partners are not hiring employees for the diner; however, they may in the future.

Although some things will change, one thing will never change – the lighthearted atmosphere.

“We are a couple of characters. We like to have fun, joke, and laugh with you,” Diffin said.

“It’s kind of like Cheers when you walk in … people come in and we holler, ‘Hey, good morning!’” she said.

The Hot Spot Diner is currently open from 5 a.m. to 1 p.m. It will be open year-round, with morning and afternoon hours. Although the hours have not been finalized, it may close for a break during the day and reopen for dinner.