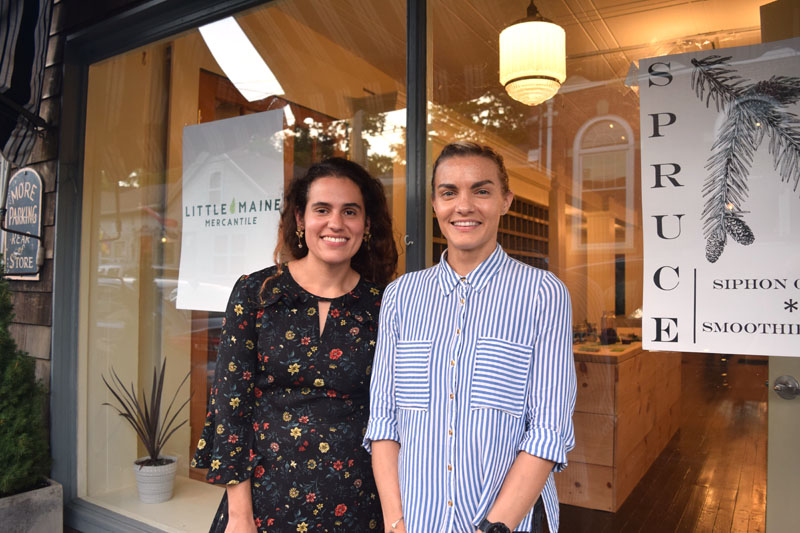 From left: Sarah Castro, owner of Little Maine Mercantile, and Julie Ambrosino, owner of Spruce, in front of their storefront at 49 Water St. in Wiscasset. Both businesses will open in mid-September. (Jessica Clifford photo)

Two new businesses will open in the former Wiscasset Old General Store in mid-September: a shop for gourmet coffee and smoothies and a dealer of Maine- and New England-made products.

They chose Wiscasset for their shop because of their personal connections to the town.

Castro’s mother retired to Wiscasset, while Ambrosino lives in Bath and frequents the town. She owns a blue smoke Maine coon cat named in the town’s honor: Mister Wissy.

Neither Ambrosino nor Castro has experience as a shop owner, but Ambrosino has about 15 years of experience in customer service and Castro has a background in marketing and business.

The space will have an appearance both modern and timeless, Castro said. It still has some features left over from the Wiscasset Old General Store, such as the wooden floors.

“I feel like there is a trend toward more people sharing spaces because it really helps the businesses because they play off one another,” Castro said. “Someone who comes in to buy something from me ends up walking out with a coffee and vise versa.”

The idea behind Spruce originated after one of Ambrosino’s relatives opened a coffee cart to sell specialty coffee in another state.

Ambrosino makes siphon coffee, which she describes as a favorite of the “coffee geek” because of the intricate brewing process.

When the water vapor in the bottom globe cools down, it creates a vacuum, suctioning the water and coffee down from the top globe. The system makes one cup of coffee at a time. 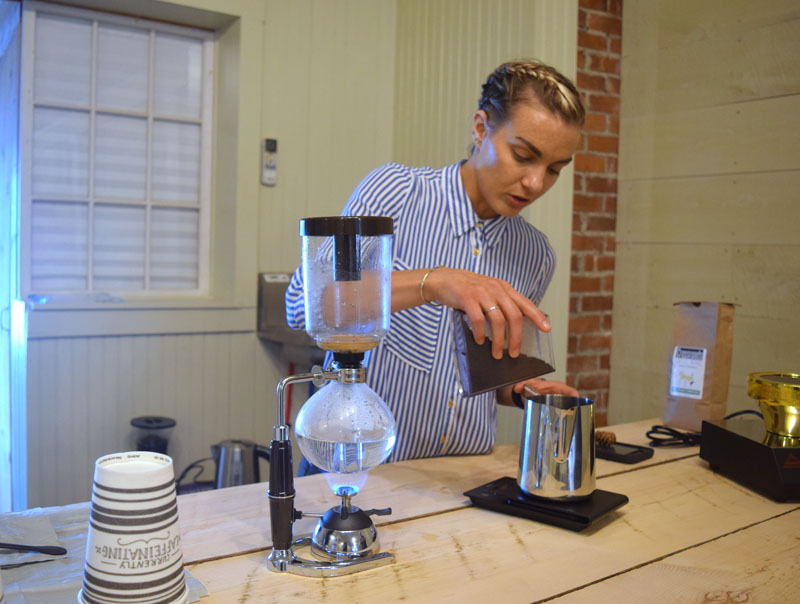 Final prices and sizes are not set, but Ambrosino said the siphon coffee will cost about $3 to $4. For those who do not want the specialty brew, she will offer coffee from a regular coffee maker.

All coffee will be from two local vendors: Crossroads Coffee Beans, of Westport Island, and Green Tree Coffee & Tea, of Lincolnville.

In addition to coffee, Ambrosino will sell smoothies and smoothie bowls.

Smoothie bowls have the same texture and taste as a smoothie, but include nutritious toppings like granola, fresh berries, chia seeds, and coconut shavings. Like smoothies, they have one or two fruits as the main ingredient. Both can be made with protein powders and non-dairy milks.

Ambrosino said she started a “mock menu” and wants to have at least four different kinds of smoothie bowls: a green bowl, a chocolate bowl, a berry bowl, and a citrus bowl.

“I have been planning since before I’ve lived in Maine. I’m really passionate about this,” Castro said.

Castro said she wants to sell products people could buy at a box store, but of higher quality. She will adjust her inventory based on what the community wants.

“I want to fill the need, so if someone says, ‘I really need this and I’d like to see this here,’ I’ll figure out a way to source it,” Castro said.

In the future, the shops will sell T-shirts and Maine-made mugs bearing their logos.

Since starting work on the space, the owners have invited people into the store during Wiscasset Art Walk to introduce themselves, drink siphon coffee and watch it made, and see the progress of the space.

Spruce and Little Maine Mercantile will be open from Friday-Monday, year-round, and closed Tuesday-Thursday. The hours have not been set; however, the pair wants to stay open a little later than most stores in the area.

“That’s the one struggle in Maine, is you don’t have places (stay) open,” Ambrosino said. “My biggest end goal is to provide that service and that enjoyment for people as they go into their evening.”