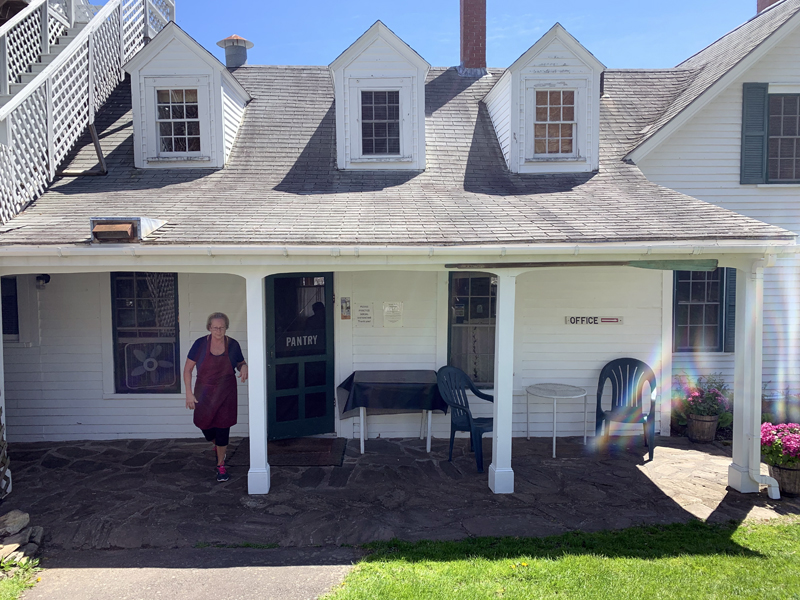 Lucy Martin, co-manager of the Gosnold Arms, comes out of the inn’s back door, where customers pick up meals from the Gosnold Pantry. (Alyce McFadden photo)

When the restaurant at New Harbor’s Gosnold Arms closed in 1999, the inn’s co-manager, Lucy Martin, never could have guessed that it would take a pandemic to resurrect it.

“But when COVID-19 came around, we knew there wouldn’t be any guests at the inn,” she said. “So it seemed like a good decision to open back up for takeout.”

And just like that, the Gosnold Arms was rechristened as the Gosnold Pantry. Since the pantry opened May 8, Lucy Martin has been cooking classic New England fare six days a week – Tuesday-Sunday – with help from her husband and co-manager, Kris Martin. The Martin family has owned the inn and cottages collectively known as Gosnold Arms since 1978.

Operating the pantry is hard work, but Lucy Martin doesn’t seem to mind.

“It’s literally just me cooking and doing it all,” she said. “But it’s been fun. I always enjoyed cooking and so I sort of fell right back into it. Yeah, my husband’s been nice enough to run the dishwasher.”

Many of the pantry’s customers are locals or in-state visitors to nearby cottages who remember the original restaurant.

“We have the same people that are coming back and saying, ‘I’m so glad you’re back open,’” Martin said. “They were the people that came to the rescue.” 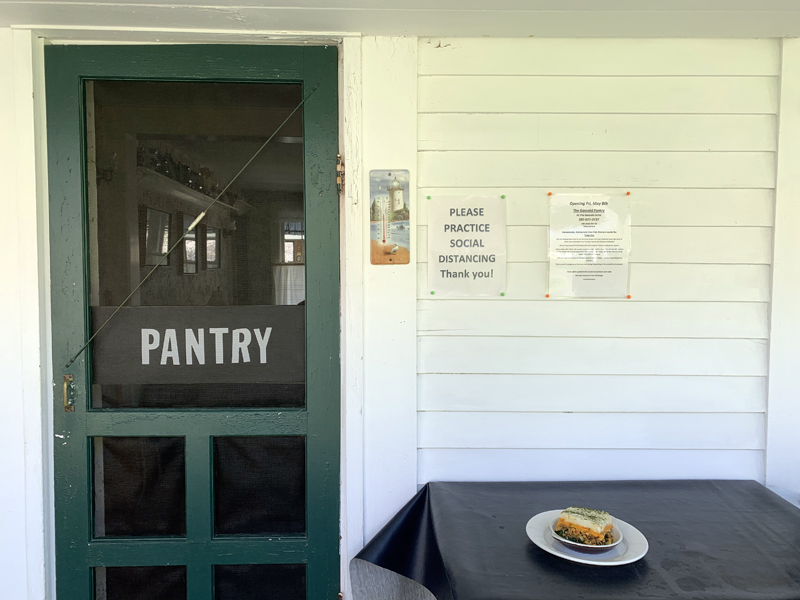 Outside of the kitchen, the inn’s expansive grounds are mostly quiet, except for a few essential construction workers self-isolating in some of the cottages that dot the grounds. The main building – the inn opened in 1925 in a renovated farmhouse – is closed for the duration of the pandemic.

“The building dates from 1850,” Martin said. “The hallways are narrow, the doors are close together, and the staff is working in the same area as guests, so it would be impossible to do social distancing.”

The inn’s cottages are open for reservations for out-of-state tourists who quarantine for two weeks, but Martin isn’t particularly optimistic.

“Our phone is not ringing. People aren’t even inquiring,” Martin said. “We have our die-hard people that have reservations in place and are just holding on to try to see if it’s going to be possible to come, but it’s difficult.”

Martin and her husband were in Florida for the winter when she hatched the plan for the Gosnold Pantry. Even though she was a thousand miles away from Maine, Martin started preparing to open the takeout operation almost immediately.

“It was like ‘oh my gosh, we’re going to open right now if we’re going do this,’” she said. “It was a very quick turnaround because I wanted to get open before everybody else.”

For now, Martin is sticking to a handful of classics from the old days – like her beef bourguignon and New England clam chowder recipes that were featured in Yankee Magazine’s “New England Innkeeper’s Cookbook” – but with a whole summer ahead, she hasn’t ruled anything out.

“People keep asking for desserts, and I’m like ‘oh boy,’” Martin said with a laugh. “We’ll evolve as it goes.”