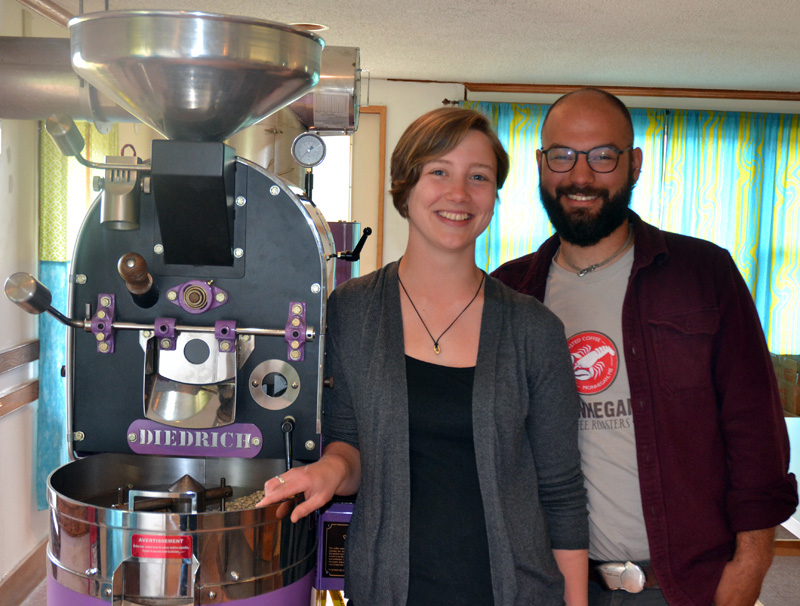 Mayhew and Feibusch have lived on Monhegan Island year-round since June 2015, shortly after Mayhew graduated from college. Feibusch’s roots on Monhegan date back further, as he grew up spending summers at his grandparents’ house on the island.

“For me, that was what I knew as summertime. I missed maybe two summers out here,” Feibusch said.

Feibusch said he always knew he wanted to move to Monhegan year-round, especially after completing two internships on the island in high school. He studied woodworking, a skill he knew he could use on the island, at the University of the Arts in Philadelphia. Mayhew was in the same program.

After a memorable trip to Monhegan in November 2013 that included an “awful” boat ride in 10-degree weather, Mayhew “seemed to like the island enough to move out here with me,” Feibusch said. “So after she graduated in 2015, we packed everything up and moved out here. We’re still picking away at the storage unit.”

The couple, who recently got engaged, has a shared love of coffee stemming from lifelong memories. Feibusch recalls “the smell of Folgers in a French press” as his grandfather sang the song “Java Jive,” while Mayhew’s introduction was sneaking sips of her dad’s cappuccino.

Now, both Mayhew and Feibusch enjoy a cup of coffee with no cream or sugar. To get their fix, they used to order coffee online. It wasn’t until a trip to California that they got the idea to roast coffee beans in their home. 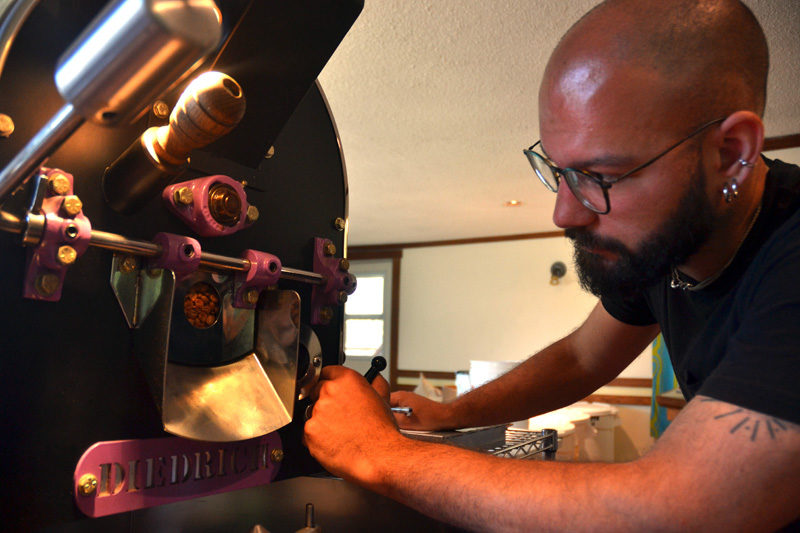 “When we went to San Francisco, there were a lot of places with roasters right in their cafe, and it got us wondering if we could make it work at home,” Mayhew said. “We tried it and it worked!”

Over time, Mayhew and Feibusch considered growing their operation.

“We wanted to own our own business, and coffee-roasting seemed to incorporate us both equally,” Mayhew said.

Starting a new business on the island presented some unique challenges, Feibusch and Mayhew said. The couple tries to be as energy efficient in their practices as possible.

“Propane is a huge cost and the supply is not always where you need it,” Feibusch said.

“The past couple of months we’ve been running out of propane on the island, and we actually had to borrow a tank from a neighbor when we wanted to test the roaster,” Mayhew said.

Living on the island also requires some forward thinking. When it came time to order bags of coffee beans from their supplier in New Jersey, Mayhew and Feibusch knew they needed to fill a pallet to capacity in order to make the trip cost-efficient. 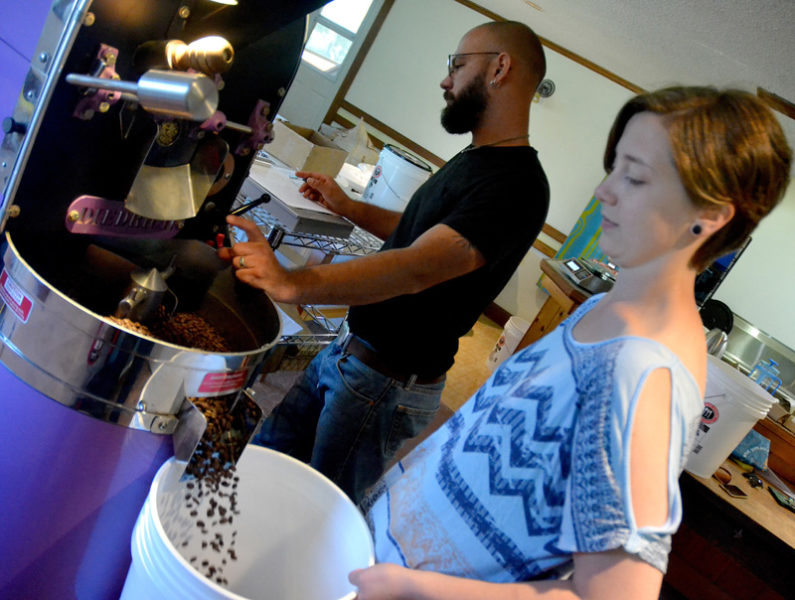 “There are more logistics involved on the island,” Mayhew said. “It’s not necessarily harder; you just have to think a little bit more ahead about it.”

However, the new business venture did create numerous opportunities for collaboration within the year-round island community.

One of the biggest obstacles Feibusch and Mayhew faced was finding a location for the business. They briefly considered building an addition onto their home, but found it to be too expensive, Mayhew said.

During a dinner party over the winter, the couple learned that their friends Dylan and Mandy Metrano had run into the same hurdle while attempting to get their chocolate business off the ground.

“We had similar problems we needed to solve and we kind of put our heads together and came up with a solution,” Mayhew said.

“It’s really been a great fit,” Mayhew said. “John and Winnie have been so supportive of what we’re doing here and really worked with us to make this work.”

Feibusch said about half of the year-round community on Monhegan Island has played some part in helping the business get off the ground, including by assisting with the transportation of the Diedrich coffee roaster from the dock to the business.

Matt and Mary Weber, owners of Monhegan Brewing Co., have been an inspiration to their neighbors, Feibusch and Mayhew, as they started Monhegan Coffee Roasters.

“They’re making small-batch beer on the island, so they know what we’re going through and have been a huge help,” Mayhew said. 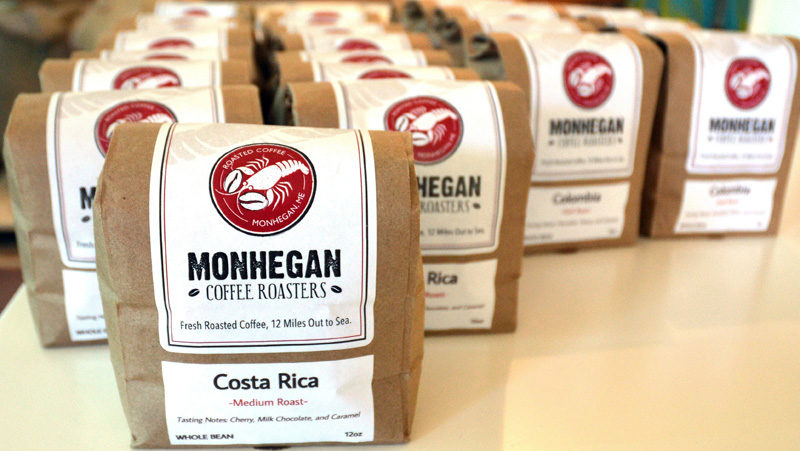 “We believe that’s where you get your best cup of coffee,” Feibusch said. “Even if you have a cheap grinder, it’s still better than having stale grounds.”

Monhegan Coffee Roasters beans are available at three locations on the island – L. Brackett and Son, Monhegan Brewing Co., and The Barnacle Cafe – as well as on the business’s website. As Christmas approaches, Mayhew and Feibusch hope to create a coffee subscription service.

“The online sales will be vital to our business in the wintertime,” Feibusch said.

In addition to Monhegan Coffee Roasters, Mayhew and Feibusch wear multiple hats in the small island community. Mayhew works as postmaster while Feibusch is the assistant fire chief and backup operator for the Monhegan Plantation Power District.

To balance their other responsibilities on the island, Mayhew and Feibusch roast coffee beans on Saturday and complete invoicing and other work for the business on Sunday. 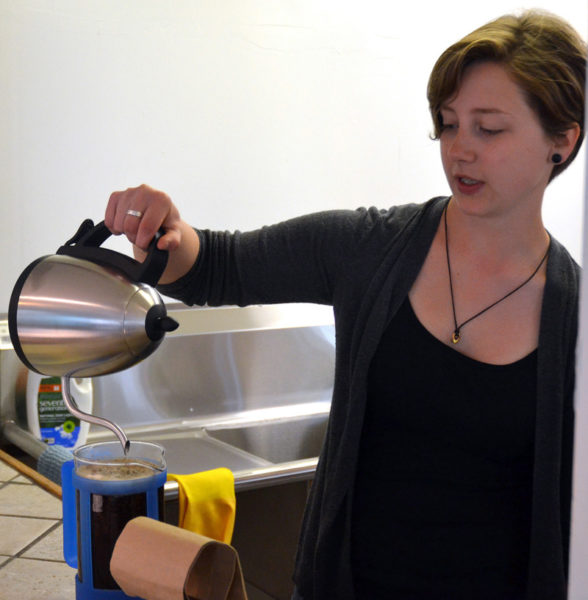 The work is split pretty evenly between the two, Feibusch said. He handles most of the machine work and bookkeeping while Mayhew takes the reins when it comes to roasting.

“Carley is an awesome cook. Everything she makes tastes amazing, so it only makes sense that she should be the head roaster,” Feibusch said.

An open house and plans to launch a cold brew coffee are also in the works.

For more information about Monhegan Coffee Roasters, go to monhegancoffee.com or find the business on Facebook and Instagram.