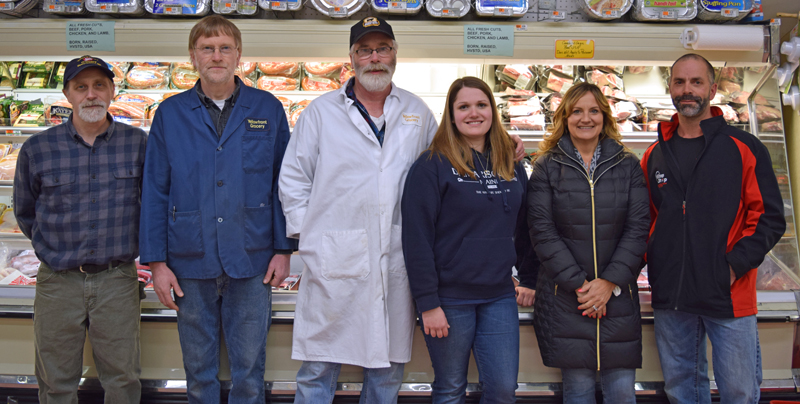 A landmark business in Damariscotta will soon have new ownership, as the Pierce family prepares to sell Yellowfront Grocery to local business owners Gary and Jane Gravel.

The Gravels and Pierces expect the sale to close Monday, Jan. 29 and the Gravels to open the store for their first day as owners Tuesday, Jan. 30.

When Yellowfront Grocery moved from the Lincoln Block in downtown Damariscotta to its present-day location in the Coastal Marketplace in 1990, some customers were unhappy with the move.

To serve customers who still wanted to shop downtown, the late Linwood Denham Pierce and his son, Don Pierce, one of the three brothers who now own Yellowfront, operated a small store downtown: Main Street Grocery.

The store occupied about a third of the former Yellowfront space, in the part of the building now home to the bookstore cafe. The Pierces closed the smaller store after about a year.

Jane Gravel will manage the new Main Street Grocery. Gary Gravel will keep his current job and work at the grocery store at night and on his days off. He plans to work in the deli and meat departments, among other tasks.

Jane Gravel’s mother, Marcia Mortimer, an alumnus of Yellowfront from its years downtown and a former deli manager at Hannaford Supermarket, will work in the deli.

Brothers Don, Jeff, and Steven Pierce will continue to work at the store: Don in grocery, Jeff in the front end and produce, and Steven in the meat department.

The other family members who work at the store – Don’s wife, Melissa, and Steven’s daughter, Alexandria – will also stay on.

The store employs about 20 people year-round and adds a few more in the summer. “Everybody is going to have the opportunity to retain their job,” Gary Gravel said. The Gravels plan to meet with each employee individually.

The Gravels have ambitious plans for the store. They plan to double or even triple the size of the produce section, expand the bakery and deli, add more ready-to-go meals like sandwiches and soups, and introduce a line of organic groceries and a floral department.

They plan to continue delivery service to customers who cannot travel to the store and expand delivery options for all customers.

Main Street Grocery will feature some high-tech attractions, including a website where customers will be able to order groceries for curbside pickup. The Gravels expect to launch the website within 30 days of the sale.

A kiosk in the bakery will offer more than 6,000 recipes, which customers will be able to print out. The recipes will include the location of each ingredient in the store.

The Gravels will switch the store brand from Shurfine to IGA and buy from an IGA supplier, citing the brand’s selection and the supplier’s charitable initiatives as motivation.

The new owners plan to redecorate the interior of the store. Exterior changes will include a new sign and color scheme.

The Gravels are asking customers to be patient in the next few months as changes take place on a daily basis.

The Gravels also own a number of rental properties in the area.

The deal ends weeks of suspense about the future of one of the county’s oldest businesses. Amid rumors of the store’s impending closure in December, Jeff Pierce posted a message to customers on Facebook.

“Our intent is to keep the store going,” he said in the post. “We are in talks with a local businessperson to take it over and keep a grocery store here.”

Challenges in the business include changes in shopping habits and more options for groceries – both in brick-and-mortar stores and online, according to Jeff Pierce.

Within the last year, the store absorbed a rent hike and an increase in the minimum wage from $7.50 to $10, although Jeff Pierce said the latter was not a primary factor in the decision to sell.

One night, the Gravels were talking about the plight of Yellowfront.

“We just kept saying, ‘The town needs that store. The community is going to suffer,’” Jane Gravel said. She had planned to retire in the spring, but the couple agreed to take on one more project.

“This is the last business we’re owning before I retire,” Jane Gravel said.

The Gravels renegotiated the store’s lease with property owner Jeremy Sclar, of Jordan Bay Investment Inc., prior to agreeing to buy the business.

Sclar has been “very helpful” in the transition, Gary Gravel said. “The conditions we needed to give us a chance to be successful, he’s accommodated,” he said.

The history of Yellowfront Grocery dates to 1921, when Linwood “Mutt” Pierce opened Pierce’s Meats in the Lincoln Block. The business has been passed down since, from Mutt to his son, Edward “Eddie” Pierce; to Eddie’s brother, Linwood Denham Pierce; to Don, Jeff, and Steve Pierce.

Despite stiff competition, customers were loyal to Yellowfront for the convenient location and their relationships with the family and their employees, as well as the store’s meat department, famous for both prices and quality, the brothers said.

Jane Gravel said the most common comment she has been receiving is “Don’t change the meat.” The Gravels plan to continue the store’s “truckload” meat sales and hold them more frequently.

Shoppers also appreciated the family’s commitment to the community through initiatives like its delivery service to homebound customers and its support of local food pantries.

The Gravels plan to continue the store’s support of local food pantries, including by donating the store’s entire Shurfine inventory when the store makes the switch to IGA.

The Pierce brothers each called the sale “bittersweet.”

Steven Pierce said several people have suggested the change will begin a new chapter in his life, but he said it’s more like a new book.

Jeff Pierce said it is a relief that the store will stay open and stay under local ownership.

The Pierces expressed gratitude for their customers’ loyal support over the years, and said they hope they will continue to support the store and all local businesses.

The Gravels, meanwhile, are excited about their new venture. “We know it’s going to be a lot of work,” Gary Gravel said. “We hope people embrace the changes, appreciate it, and continue shopping here.”