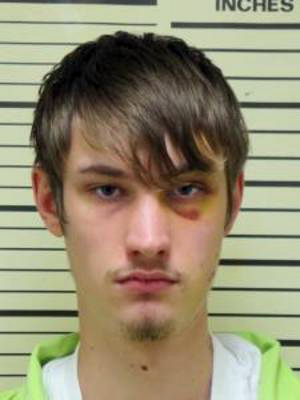 A 20-year-old Boothbay Harbor man has pleaded guilty to six charges in connection with an April home invasion in Nobleboro and a high-speed chase from Boothbay to Wiscasset in August.

His guilty pleas to the robbery and threatening charges were Alford pleas, similar to a plea of no contest. The other pleas were standard guilty pleas.

In exchange for the pleas, the Lincoln County District Attorney’s Office dismissed one count each of class E driving to endanger, operating beyond license condition or restriction, and violation of condition of release.

Andrews was sentenced to 10 years in prison with all but 1.5 years suspended, plus four years of probation, for the robbery conviction. He will serve the sentence concurrently with lesser sentences for the other crimes.

He must pay a total of $825 in fines and $353.06 in restitution to three individuals for damaging their vehicles during the chase. His driver’s license was suspended for 150 days.

His probation conditions prohibit the possession or use of alcohol or illegal drugs and bar his ownership, possession, or use of firearms or dangerous weapons. He must submit to random searches and tests to ensure compliance.

The conditions require Andrews to undergo treatment for issues of mental health and substance abuse. They prohibit contact with the victim of the home invasion and require payment of restitution.

On April 16, Andrews knocked on the window of a Nobleboro home, according to an affidavit by Lincoln County Sheriff’s Office Detective Terry Michaud. When the homeowner let him in, Andrews asked to use the phone.

As the homeowner was getting a phone, Andrews took a hatchet out of his backpack and “demanded (the victim) give him his guns and money,” Michaud said in the affidavit.

The then-74-year-old man “grabbed a hammer and fought off the person, who ultimately left the house and property (without) any items,” Michaud said. The home invasion was reported at 8:03 a.m.

Witnesses reported seeing a green Ford Explorer in the area and a man running toward it. 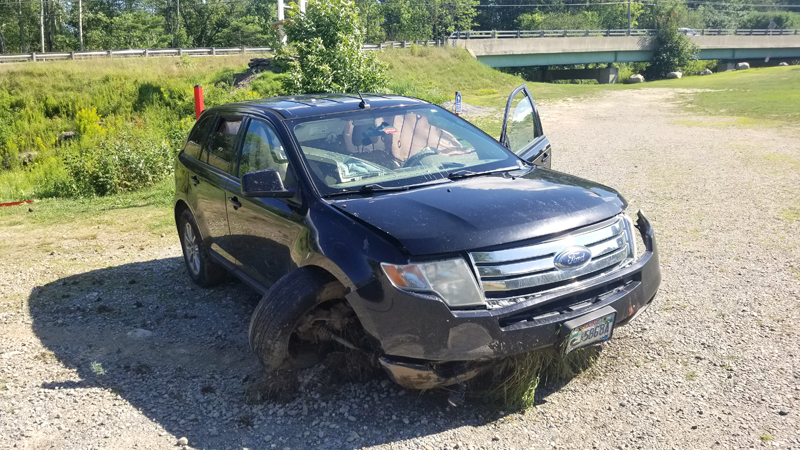 The 2007 Ford Edge Hunter M. Andrews was driving in a high-speed flight from police Aug. 2. Andrews crashed at the intersection of Route 1 and Mountain Road in Woolwich, with the vehicle coming to rest in the parking lot of the Montsweag Flea Market. (Photo courtesy Lincoln County Sheriff’s Office)

At 4:52 p.m., the sheriff’s office released a sketch of the suspect and a photo of a Ford Explorer similar to witnesses’ description of the vehicle they saw.

The release of the information led to a tip that caused investigators to zoom in on Andrews. Michaud and Detective Sgt. Ronald Rollins went to the home where Andrews was staying that evening.

“Hunter ultimately admitted to going to (the victim’s home) and pulling a hatchet on (the victim) and demanding money,” Michaud said. He arrested Andrews at 11 p.m.

Andrews was out on bail on the robbery charge Aug. 2 when he led police on a high-speed chase in a black 2007 Ford Edge SUV.

The Boothbay Harbor Police Department received a report of a vehicle taken without permission by the owner’s son at about 2:20 p.m. Andrews “had taken the vehicle and made suicidal threats with a knife,” according to a statement from the sheriff’s office after the chase.

Boothbay Harbor police issued a “be on the lookout” alert for the vehicle to other agencies.

Lincoln County Sheriff’s Deputy Chase Bosse spotted the vehicle going north on Route 27 in Boothbay and attempted to stop it. He described the ensuing chase in an affidavit.

“The Ford Edge accelerated away from me at a high rate of speed, passing vehicles on the left (and) driving into oncoming traffic,” Bosse said. “The subject vehicle struck (three) other vehicles in an attempt to elude myself and other officers.” The vehicles were stopped in traffic and their mirrors were broken.

The chase proceeded along Route 27 into Edgecomb, onto Eddy Road, onto Route 1, and across the Donald E. Davey Bridge into Wiscasset. Law enforcement made multiple attempts to deploy spike strips to deflate the vehicle’s tires, but could not position them in time.

Due to the collisions, Andrews’ speed, and the lack of more law enforcement units close enough to deploy spike strips, deputies ended the pursuit. Speeds had exceeded 100 mph, Bosse said.

Law enforcement searching the area found the SUV in the parking lot of the Montsweag Flea Market, across the Wiscasset town line in Woolwich, at 2:48 p.m.

Andrews had failed to negotiate the turn from Route 1 onto Mountain Road, according to the sheriff’s office. The vehicle had gone airborne and crashed into the empty parking area. Andrews had fled on foot into the woods.

Deputies from Lincoln and Sagadahoc counties searched the area, assisted by a K-9 team from the Topsham Police Department, as well as the Wiscasset and Boothbay Harbor departments. Andrews was located and taken into custody at 3:36 p.m.

Andrews was taken to Mid Coast Hospital in Brunswick for a mental evaluation and to be medically cleared for incarceration, according to Bosse. At the hospital, he admitted to drinking beer before the chase.

“Mr. Andrews said he had approximately (four) Natty Daddy’s, which are 24-ounce beers,” Bosse said in his affidavit.

Andrews is in custody at the Maine Correctional Center in Windham, according to the Maine Department of Corrections.

Boothbay Harbor attorney Richard W. Elliott II represented Andrews. He did not respond to a request for comment.