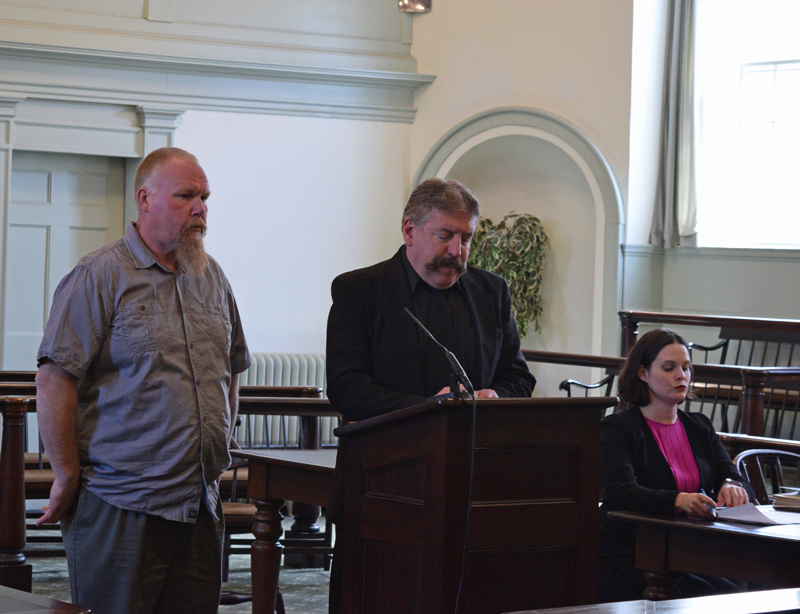 A Boothbay man who attempted to shoot another man in Edgecomb and burned down a house in Boothbay in 2017 was sentenced to two years in jail Monday, May 13 for attempted murder and arson.

Michael E. Holbrook, 47, entered Alford guilty pleas, similar to pleas of no contest, to those and six other charges during a hearing at the Lincoln County Courthouse in Wiscasset. He was sentenced to 10 years in prison with all but two years suspended, plus six years of probation.

“Though we feel two years of incarceration is short considering the nature of these charges, to ensure these convictions, as well as ensuring the highest level of community supervision for the longest period possible, we concluded this to be the most responsible method in which to proceed,” District Attorney Natasha Irving said.

Late Friday, Holbrook went to a residence on Old County Road in Edgecomb. After a physical altercation with two people, he pointed a 9 mm handgun at one man and pulled the trigger three times, according to Irving.

According to a 2017 press release from the Lincoln County Sheriff’s Office, deputies responded to the residence at 10 p.m., but Holbrook had fled.

“As the investigation unfolded through the overnight hours, it took several twists and turns while the suspect was still at large,” Chief Deputy Rand Maker said in the press release.

Holbrook returned to the residence at Old County Road. The three victims were outside when Holbrook arrived and fired shots which “struck in the area where the people were sitting around the fire,” Irving said, as well as shots into a woman’s vehicle. He then fled again.

The Lincoln County Communications Center received a call from Holbrook that a house at 214 Pension Ridge Road in Boothbay was on fire, Irving said.

When approached by police after getting into a vehicle, Holbrook fled to a building his father owns about 200 yards away, at 3 Hooker Way, where he later surrendered to the Maine State Police Tactical Team after negotiators talked him out of the building.

Holbrook was taken into custody without incident, Irving said.

Due to the standoff, the fire departments could not fight the fire and the house was destroyed.

The district attorney summarized the evidence she would have presented if the case had gone to trial.

Evidence from the Maine State Fire Marshal’s Office shows intentional arson and Holbrook was the only person at the address, Irving said.

In addition, the bullets in the vehicle were linked to Holbrook’s gun, Irving said.

Holbrook “definitely had some very good points for trial,” Elliott said. “On the other hand, with all considerations … he made a rational decision to go forth with this plea.”

Justice Daniel Billings imposed the jointly recommended sentence, which consists of a series of concurrent and consecutive sentences.

Holbrook will first serve concurrent sentences of six months in jail for two counts of class D assault and one count of class D criminal mischief, all misdemeanors.

Although Irving believes insurance covered the arson damage, she asked Billings to order Holbrook to pay $3,092.32 in restitution for damage to the vehicle if insurance has not covered it. Billings agreed.

Consecutive to the first sentence, Holbrook will serve concurrent sentences of nine months in jail for two counts of class C criminal threatening with a dangerous weapon, both felonies.

Holbrook will then serve concurrent sentences of eight years with all but nine months suspended, plus four years of probation, for one count of attempted murder and one count of arson, both class A felonies.

Finally, he will serve a sentence of two years, fully suspended, with two years of probation for class C reckless conduct with a dangerous weapon, a felony.

He will serve the entire custodial portion of the sentence at Two Bridges Regional Jail in Wiscasset.

Holbrook’s probation conditions require him to undergo treatment for addiction and mental health issues. The conditions prohibit contact with the victims and prohibit his possession or use of alcohol or illegal drugs.

A ninth charge, of class A arson, was dismissed.

Irving explained why the district attorney’s office recommended the sentence.

She said her office looked at Holbrook’s criminal history, and he has never been incarcerated before.

“We recognized that this defendant would be returning to the community, and through this structured sentence, he will be able to take advantage of services that have proven effective in long-term community safety outcomes,” Irving said. “Again, the safety of the victims and the community are our ultimate concern, and this sentence reflects that.”

One of the victims read testimony at the hearing prior to the sentencing. Irving said she thinks at least one other victim was “too traumatized by these events to be here today.”

The victim who read testimony had known Holbrook for nearly two decades and described him as a “bully,” “abusive,” “controlling,” and “selfish.”

Leading up to the series of events in April 2017, the victim said, “I lived in fear, knowing every minute of the day that he’d come kill me at some point, and I was right. He tried.”

“April 14, 2017 was the worst night of my life,” the victim said. “When Mike started texting me, I knew it would not be good, but when he texted me, and I quote, ‘I guess that tonight’s the night. People die tonight.’ and a kissy-face (emoji), I knew,” the victim said.

“To this day I live in fear,” she said. “I carry a gun, look over my shoulder, and I’m constantly on high alert.”

After the sentencing, Elliott asked the justice for a stay of the jail sentence. Billings agreed to a stay until 5 p.m., Friday, July 12, when Holbrook must turn himself in at Two Bridges.

The main reason for agreeing to the stay, Billings said, is due to Holbrook’s compliance with his bail conditions.