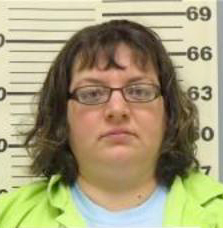 A 36-year-old Boothbay woman was sentenced Tuesday, Oct. 25 to 10 years in prison with all but 2 1/2 years suspended, plus 12 years of probation, for disseminating child pornography.

Rachel E. Anderson also received concurrent sentences of a year each for five counts of possessing child pornography and one count of tampering with a witness, according to court documents.

She is in custody at the Maine Correctional Center in Windham, according to the Maine Department of Corrections.

Anderson took photos of a girl under the age of 12 and sent them to a man in South Carolina, who sent Anderson photos of himself sexually abusing another girl under the age of 12, according to an affidavit by Lincoln County Sheriff’s Office Detective Terry Michaud. Anderson met the man on Craigslist and they discussed meeting in Maine, but Anderson’s therapist contacted authorities upon learning of the exchanges.

A review of Anderson’s cellphone and computers by the Lincoln County Sheriff’s Office and the Maine State Police Computer Crimes Unit found 19 of the photographs taken by Anderson, as well as 75 videos of sexual assaults on male and female children, according to the affidavit.

The South Carolina man – Michael A. McKinney, 33, of Fort Mill – pleaded guilty to third-degree criminal sexual conduct with a minor Nov. 20, 2015, according to The Herald, a local newspaper. He was sentenced to 11 years in prison.

McKinney must register as a sex offender and will be subject to GPS monitoring for life, according to The Herald.

On Sept. 13, she was indicted again on a charge of class C tampering with a witness or informant. The tampering charge was a result of Anderson’s efforts, on Oct. 14, 2015, the day before her arrest, to convince McKinney “to withhold testimony, information, or evidence,” according to the indictment.

Anderson pleaded no contest to the tampering charge Oct. 25, according to court documents.

Anderson will be subject to a long and restrictive set of probation conditions upon her release.

Anderson must complete treatment for psychological and sexual offender issues.

The conditions prohibit her possession or use of alcohol or illegal drugs and require her to submit to random searches and tests for alcohol, drugs, and “sexually oriented material.”

Finally, she must live at a certain address and spend every night there unless she obtains permission to do otherwise.