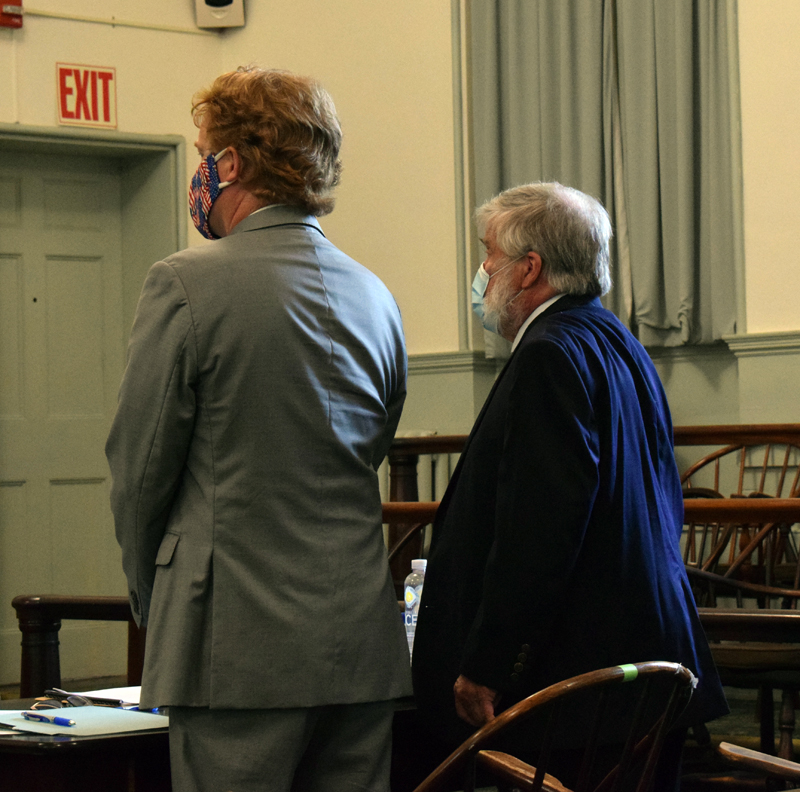 Defense attorney James Mason (left) stands with his client, disbarred attorney Jonathan Hull, of Newcastle, during Hull’s sentencing for his embezzlement of funds from two nonprofits, at the Lincoln County Courthouse in Wiscasset on Tuesday, Aug. 25. (Evan Houk photo)

Jonathan C. Hull, a disbarred local attorney, pleaded guilty to three crimes related to embezzlement from two nonprofits he served as treasurer at the Lincoln County Courthouse on Tuesday, Aug. 25.

Hull must also undergo psychological evaluation and treatment during his probation.

Hull, 74, admitted to two felonies and one misdemeanor: two counts of class C theft by unauthorized taking and one count of class D misuse of property. The counts are in relation to embezzlement from the Cheseborough Program and Seven Trees Inc.

The misdemeanor count was unconditionally discharged, meaning there was no sentence for the crime.

Seven Trees Inc. was co-founded by Hull and was the owner and steward of two homes for troubled youth, the Weymouth House in Bristol and the Curtis House in Jefferson, from the late 1970s until the homes closed in 2008 and 2010, respectively.

Hull lives in Newcastle and had practiced law in Damariscotta until an August 2018 suspension that resulted from the charges.

Assistant District Attorney Michael Dumas presented the state’s case against Hull and argued for a four-year sentence with all but nine months suspended, saying Hull’s conduct was “deeply troubling.”

“Professionally, yes, Mr. Hull has paid a price. But that does not erase the harm he has inflicted,” Dumas said.

“The courts have not shied away from imposing periods of imprisonment on other members of the bar who exercise unauthorized control over funds. Nor should this court shy away from doing so today,” Dumas argued.

Mallonee said each class C felony could carry with it a sentence of up to five years of imprisonment and a $5,000 fine.

After a handful of emotionally charged appeals on Hull’s behalf and an argument from Hull’s Brunswick-based attorney, James Mason, in the courtroom on Tuesday, Mallonee decided against jail time.

Mallonee said the COVID-19 pandemic factored into his sentencing decision, as there is not a death sentence for embezzlement.

“If there were no COVID pandemic, then I think that I would not feel that I had a choice but to impose a jail sentence,” he said.

According to Hull’s disbarment decision from the Maine Supreme Judicial Court in June, he was diagnosed in 2018 with post-traumatic stress disorder connected to his military service during the Vietnam War and has been under medical care for diabetes, high blood pressure, and a sleep disorder.

Hull spoke during the hearing and cited his mental health issues as factors in his unlawful behavior.

Mallonee said Hull’s conduct represented a pattern of behavior, not just a one-off incident, and is a blemish on the reputation of the legal profession.

“Is this a lawyer with a sudden emergency need who met an opportunity and yielded to an uncharacteristic temptation? And that was what I hoped I would see. But it is what I fear I did not see,” Mallonee said.

Hull is cited in the decision for misconduct involving two former clients, Martha L. Hills, of Swoope, Va., and the estate of Wayne Plummer.

According to a complaint filed with the Maine Board of Overseers of the Bar, in February 2018, Hull improperly charged Hills’ credit card in the amount of $3,480.88, but reversed the charge later that day when contacted by Hills.

The disbarment decision also details how, from 2009-2010, Hull withdrew approximately $47,300 in funds from the estate of Wayne Plummer without explanation. Hull started to repay the estate in 2010, but there is still an outstanding balance.

Mallonee said he was grateful for 17 letters and additional statements from family and colleagues in support of Hull’s character.

Rob Gregory, a Damariscotta attorney who serves as clerk and registered agent with Seven Trees, attended by videoconference and spoke highly of Hull’s character, saying he has known him for 40 years.

Gregory argued against jail time and said Hull showed “only remorse and a desire to provide quick restitution and acknowledge his wrongdoing.”

Rem Briggs, a Newcastle resident and current member of the Seven Trees board who served with Hull beginning in 2007, spoke to Hull’s volunteer and charitable work as co-founder of the organization.

“When I think of Jonathan Hull, the first thing to come to mind are not his mistakes; he is aware of them and made good. What comes to mind first and foremost are the hundreds of troubled youth that Jonathan’s efforts put on the path of recovery and promise,” Briggs said.