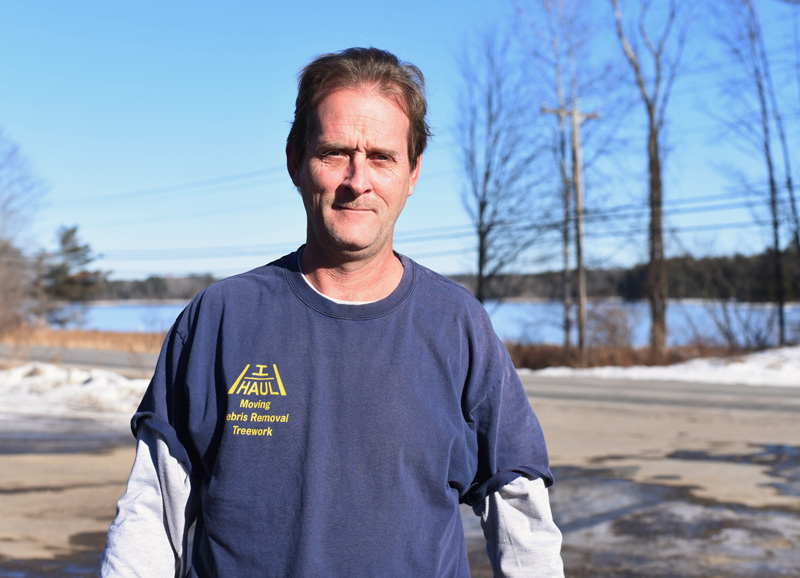 Damon Heck is the new owner of I-Haul, which specializes in moving, tree work, and debris cleanup. (Jessica Picard photo)

I-Haul, the Newcastle business that hauls away debris and provides moving services, is now owned by Damon Heck, who had worked for the company for several years. Previous owner Gordon Clark, who started the business 18 years ago, is going back to his original career: teaching.

Heck, of Damariscotta, moved to Newcastle in 2011 from Daytona Beach, Fla., where he drove trucks for Don Bell Signs LLC. Heck started working for I-Haul that year and took over the business Aug. 1, 2018.

“I’m not a desk person,” Heck said of why the job works well for him. “My dad always taught me something: if you’re not working, you’re wasting time. I guess that’s the way I was brought up.”

The company assists with moving, does tree work, hauls away debris, and does building clean-outs.

Clark, of Newcastle, started the business in 2000 after buying a pickup truck and deciding to try hauling things for people.

He said he named the business I-Haul because it was him doing the work, not a crew of other people.

As time went on, however, the company became busier.

“The business was getting beyond that concept,” he said, and he needed a couple of crews.

Clark said he decided to pass on the business to someone else because the work was becoming physically stressful as he got older, and because he wanted to go back to his original career: teaching children.

Before opening the hauling business, Clark taught mathematics in the Peace Corps and at Mt. Ararat High School in Topsham.

Clark is certified to teach middle school and high school students, and is working toward certification for elementary school. He hopes to start teaching again at a local school.

Clark said he chose Heck to take over the company because he knows the business.

“I felt very comfortable having him do what it was that I did,” Clark said. “It seemed like a good fit.”

Clark said that while he could have made a list of what to do for a new owner, he wanted someone who truly cared about the business and the people in the community.

“I knew Damon had the same level of caring that I did, about doing a good job,” he said. He said one part of the job is making sure unwanted, but still useful, items being hauled away go to local organizations that could benefit from them, rather than to the dump.

“During (the past seven years), we became more than just co-workers. He’s my friend,” Heck said of Clark. “This was his baby, and it evolved. He just didn’t want it to end.”

Heck said he would like people to know that I-Haul travels around the country, not just within Lincoln County. He said that within the past six months, he has helped people move to California, Nevada, Florida, and other distant locales.  He said the business is fully insured.

He said a big part of the job is interacting with people.

Heck said he has not raised prices since taking over the company.

“I’m not doing this to get rich, I’m doing this because I love people,” he said. “I’m going to try everything in my power not to raise my rates.”

“We have repeat customers that call every single summer and every single winter, and that’s what I love. It’s like family,” he said. “If you can’t take care of the people in your town, who can you take care of?”

Heck currently has two employees working with him and occasionally asks Clark for help with big tasks, like moving a baby grand piano.

The company mostly rents U-Haul trucks for its jobs, since it is cheaper than maintaining its own trucks and supports other businesses, Heck said.

“This company, it was really good for me. For all the trials and tribulations that I had in my life, if I can come back and be successful, anybody can do it. It just takes a lot of hard work. And Maine is a beautiful place to do it,” Heck said. “I never thought I’d be where I am now, and it’s a good place.”

“You come home and you’re tired, but you feel good about yourself because you put in a good, hard day’s work,” Heck said. “If I can make one person a day happy, if I can put a smile on somebody’s face, then I go home happy.”