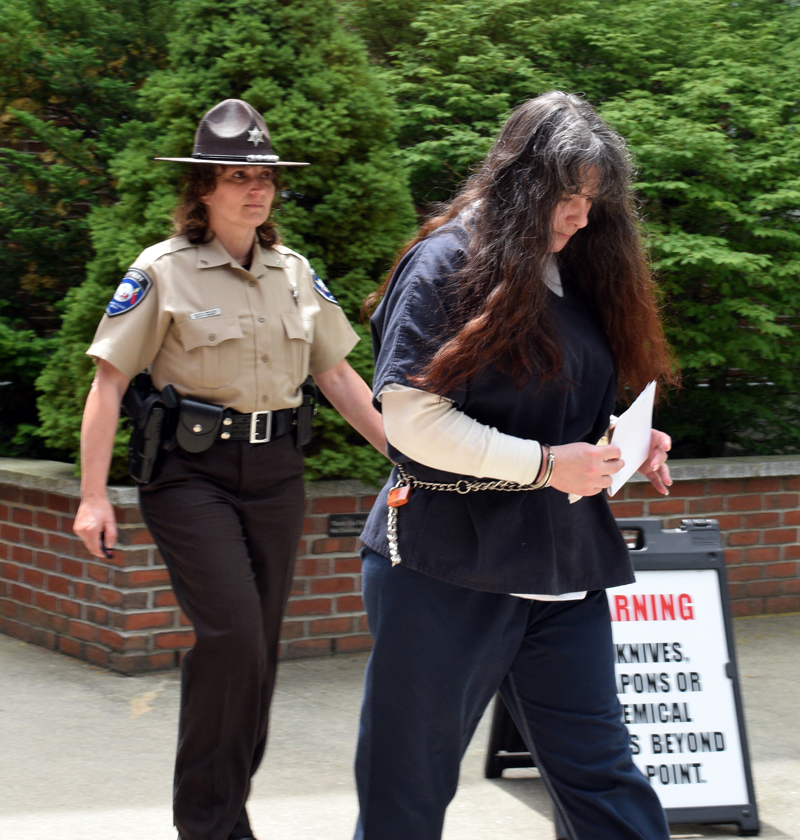 Shawna L. Gatto, 44, of Wiscasset, was sentenced to 50 years for the December 2017 murder of 4-year-old Kendall Chick during a hearing at the Lincoln County Courthouse in Wiscasset on Tuesday, June 25.

Based on state law, Stokes had to assign special weight to the fact that Chick was under 6 years of age and a family member.

“This was the ultimate act of domestic violence. This was a beating death over a period of months of a defenseless, small child by her primary caregiver,” Macomber said.

“She is someone worth giving an opportunity to, to get out before she dies from prison,” Pratt said.

“Ms. Gatto has something left to offer to society,” he said.

Pratt said Gatto is “not a monster,” although she has been portrayed as one.

“I don’t view her as a monster. Maybe people believe that I should, but I don’t,” Stokes said.

Gatto had waived her right to a jury trial in the summer of 2018.

Chick lived with her grandfather, Stephen Hood, and Gatto, her primary caregiver and Hood’s fiancee, at 19 Crickets Lane in Wiscasset. The Maine Department of Health and Human Services had placed her in the home.

The Wiscasset Ambulance Service responded to the home for a report of an unresponsive 4-year-old girl the afternoon of Dec. 8, 2017. An ambulance crew brought Chick to Mid Coast Hospital in Brunswick, where she was pronounced dead.

Police found evidence of “trauma and subsequent cleanup” of blood in multiple rooms of the house.

“The court is highly suspicious that Kendall was, in fact, dead much earlier in the day of Dec. 8, 2017 and that the scene at 19 Crickets Lane was contrived and staged by the defendant,” Stokes said when delivering the guilty verdict April 30.

Emergency medical technicians and a paramedic on scene noted that Chick was cold to the touch, and the emergency room doctor noted stiffness and difficulty opening Chick’s mouth to insert a breathing tube, Stokes said.

Both signs indicate the onset of rigor mortis, which, according to Maine Chief Medical Examiner Mark Flomenbaum, could occur at four to six hours after death in a child.

According to Flomenbaum, 15-20 distinct injuries were found on Chick’s face, head, and neck.

During the trial, prosecutors presented photos of Chick’s injuries. Gatto, in a recording of an interview with police, blamed the injuries on the girl’s clumsiness.

According to Hood, DHHS checked on Chick once in the time she was at 19 Crickets Lane. She lived there either 11 months or more than three years, according to different accounts.

In a press conference after the sentencing, Macomber said he believes the case is not about DHHS, but instead about Gatto’s actions toward Chick.

Hood, on the third and fourth days of the trial, testified that Chick “always” had bruises, though her injuries grew more severe before her death. He said he and his fiancee would not take her to an emergency room or anywhere in public because of her many bruises.

Before delivering the guilty verdict, Stokes said he considered the nature and extent of Chick’s injuries, Gatto’s statements to police and others about Chick’s bruises, and the physical evidence found at 19 Crickets Lane when making his decision.

He referred to the photos of Chick’s injuries as “profoundly disturbing.”

“Anyone looking at those photographs, and anyone looking at Kendall while she was alive, would immediately recognize that she was a battered child, unless they were totally ignorant, in the deepest denial, or were covering up for the abuse,” he said before delivering the verdict.

Stokes called Gatto’s insistence that Chick had been fine shortly before her death “nothing short of preposterous.”

“The death-producing conduct engaged in by the defendant – the fatal abdominal injury – was the culmination of a long and continuous pattern of physical abuse perpetrated against a child who had just turned 4 years of age,” Stokes said.

He said the abuse was not a “one-time, momentary loss of control by a frustrated and sleep-driven parent or caregiver.”

“The physical abuse suffered by Kendall Chick, when viewed objectively and in the totality of all the circumstances, can only be described as outrageous, revolting, shocking, and brutal,” Stokes said before the verdict. “If what the defendant did to Kendall Chick does not constitute depraved indifference to the value of human life, it is difficult to imagine what conduct would ever meet that standard.”

However, prior to imposing a sentence, the judge said he felt a “measure of sympathy” for the defendant.

Gatto’s initial motives were good because she wanted to take care of Chick and two other grandchildren, Stokes said.

“She did not start out with the goal of hurting this child, I don’t believe that for one minute, but she got herself into a situation where she was overwhelmed and I believe she began to lash out at Kendall,” Stokes said.

Soon, she could not ask for help because she had gone too far and knew the bruises would be pinned to her, Stokes said.

“There were people around this household who closed their eyes to this, and for whatever reason, Shawna simply could not bring herself to ask for help,” Stokes said. He said if there had been an intervention, he believes Chick would still be alive.

During a press conference after the sentencing, Macomber said it was a “tragedy” that there was no one present at the courthouse to speak on Chick’s behalf other than himself.

No family members spoke during the hearing. Gatto declined to speak when asked by Stokes.

After much argument at trial regarding Hood’s role in the case, Macomber said no charges will be brought against him now.

“We reached the determination that, based on our evidence at this time, that we are not going to bring charges against Stephen Hood,” Macomber said. “If additional evidence comes to our attention, that could definitely change.”

While Pratt exited the courthouse, he said the defense team will appeal both the verdict and the sentence. They have 21 days to file a notice of appeal, he said. He otherwise declined comment.