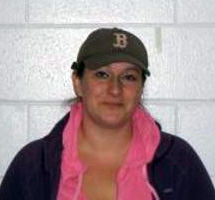 A Jefferson woman who police say used a scam to gain access to area homes and look for prescription narcotics has reached a plea deal.

Amanda M. Wallace, 34, pleaded guilty Nov. 14 to one count each of class B burglary, class C stealing drugs, and class D theft by unauthorized taking, according to court documents.

The three counts are in connection with the May 18 burglary of a Bristol home and the theft of oxycodone from the home, and a jewelry theft in Jefferson on May 5.

The state dismissed the rest of the charges against Wallace: 18 counts each of class B burglary and class E attempted theft. Wallace had been accused of committing those crimes on May 18, 19, and 25 in Bristol, Jefferson, Newcastle, and Nobleboro.

The plea was part of an agreement known as a deferred disposition. The agreement delays sentencing for a year and requires Wallace to meet certain conditions.

As one of the conditions, Wallace must provide the district attorney’s office with a letter of apology to the victims and the community for possible publication in The Lincoln County News.

The agreement also requires her to comply with her probation conditions in a 2014 case involving the theft of firearms, and also includes terms standard to all such agreements. For example, she must not commit any new crimes.

If Wallace fulfills the terms of the agreement, she will receive a sentence of two years in custody, all suspended, and two years of probation.

She would begin probation after she completes probation in the 2014 case. She has about a year and nine months to go in the earlier case, according to the district attorney’s office.

Her probation conditions in the new case would match her present conditions, which include random searches and tests for alcohol, drugs, and firearms or other dangerous weapons.

According to a May 20 press release from the Lincoln County Sheriff’s Office, Wallace would go door to door and tell residents she was looking for her dog. She was pregnant at the time and would ask to use the restroom at each residence, where she would look through the medicine cabinet for prescription narcotics.

Upon confrontation, she “admitted to entering several homes around the county under false pretenses looking for drugs,” according to the press release. She did not have a missing dog. She was summonsed and released May 18.

Wallace has previous convictions for felony theft. She stole an antique hunting rifle and a .22 pistol in Damariscotta and Bristol in spring 2014, then pawned the guns, according to LCN archives, which cite court documents and law enforcement.

Wallace pleaded guilty to two counts of class B theft by unauthorized taking in February 2015. She later received a sentence identical to what she could receive in the current case: two years in custody, all suspended, and two years of probation.

She received seven days in jail for probation violations as a result of her recent crimes.

The agreement and the dismissal of most of the charges against Wallace takes into account Wallace’s voluntary completion of an inpatient rehabilitation program for substance abuse, her positive work with her probation officer, and input from the victims of the crimes, according to Kanwit.

Because she still has about 21 months of probation to serve for the 2014 case, she will remain on probation until 2020. If she successfully completes probation, “she’s going to be really set on the good path and she will be rehabilitated,” Kanwit said.

“If she does go back to her past ways, then she’ll pay the price for that,” Kanwit said. “She’ll go to prison for a long time.”

Kanwit said the state could have proven the charges against Wallace at trial.

“This is giving someone an opportunity to change their ways,” he said. He also described the arrangement as a response to Wallace “taking initiative” by pursuing rehab on her own.

“I hope for a good outcome,” Kanwit said. If Wallace completes her probation without any more issues, “I don’t expect to see her as a defendant in criminal court again,” he said.

Wallace will return to court for a hearing to determine the final outcome of the case at 1 p.m., Nov. 13, 2017. She is free on personal-recognizance bail, which means a promise to appear.