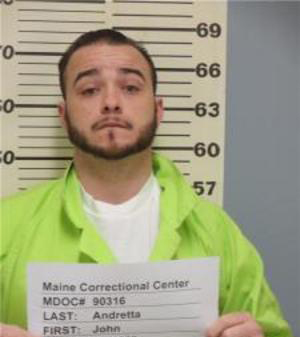 A Wiscasset man who, according to police, was a middleman between street-level heroin dealers in Lincoln County and a supplier in Massachusetts, has been sentenced to four years in prison.

John Andretta Jr., 28, pleaded no contest April 6 to a single count of class A aggravated trafficking in schedule W drugs (heroin), according to court documents. In addition to the four-year prison sentence, he must pay $515 in fines.

The state dismissed one count each of class B conspiracy to commit aggravated trafficking in schedule W drugs (heroin) and class E violation of condition of release.

Maine State Police arrested Andretta in Portland on Oct. 7, 2016, on warrants out of Lincoln County. The arrest was the third in connection with the fatal overdose of a Wiscasset man Aug. 12, 2016.

Andretta was the middleman between the man’s dealer, Ashley L. Dowdy, 29, of Wiscasset, and her supplier in the Lawrence, Mass. area, according to an affidavit by an investigator with the Maine Drug Enforcement Agency.

Lincoln County Sheriff’s Office Detective Scott Hayden, upon obtaining a search warrant for Dowdy’s cellphone records, found text messages between Dowdy and Andretta about meet-ups, trips, and weights, according to the affidavit.

On Sept. 9, Andretta, Dowdy, and a third man were returning from a trip to Massachusetts when Maine Drug Enforcement Agency and Maine State Police personnel attempted to stop Dowdy on Interstate 95 just north of the York County tolls.

Dowdy did not stop, and during a chase lasting a few miles, she, along with her passengers, emptied plastic bags out of the vehicle’s windows, then disposed of the bags out the windows, according to the affidavit. The incident was recorded on video.

Law enforcement found three plastic bags in the area that had been ripped open. The investigator conducted a field test on one of the bags, which tested positive for heroin, according to the affidavit. Upon further testing at the Maine State Police Crime Laboratory, the bags tested positive for cocaine and fentanyl as well.

Dowdy pleaded guilty Feb. 27 to one count of class B illegal importation of scheduled drugs and two counts of class B unlawful trafficking in schedule W drugs (heroin). She was sentenced to six years in custody with all but two years suspended, plus three years of probation and $1,545 in fines. She is in custody at the Maine Correctional Center in Windham.

Like Dowdy, Allen was allegedly distributing the heroin to users in the Wiscasset area, according to the MDEA agent’s affidavit.

Andretta was also suspected of being a middleman for Wilson R. “French Fry” Collamore, 41, another street-level heroin dealer in Knox and Lincoln County, according to the affidavit.

The Knox County Sheriff’s Office and MDEA agents arrested Collamore in Thomaston on Aug. 3, 2016, after receiving an anonymous tip about a drug deal in Waldoboro.

Deputies and MDEA agents found 7.1 grams of heroin on a woman who said she was driving Collamore around when he “threw it at her” during the traffic stop, according to the affidavit.

During their investigation, agents found text messages between Collamore, the woman, and Andretta, including discussion of bringing Andretta money from Collamore and another man and about meet-ups and trips, according to the affidavit.

Collamore, who was on probation for a prior trafficking conviction at the time of his arrest, was convicted of class B aggravated furnishing of scheduled drugs and is serving a three-year sentence at the Bolduc Correctional Facility in Warren.

Andretta has prior felony convictions for drug trafficking and drug possession dating to 2011 and 2015, respectively. He is in custody at the Maine Correctional Center in Windham.