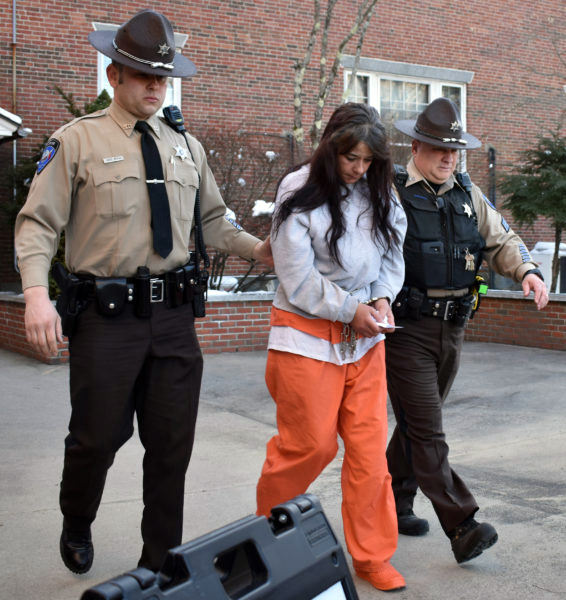 During the first day of the trial of Shawna Lyn Gatto, charged with depraved indifference murder in connection with the death of 4-year-old Kendall Chick, prosecutors presented photos of the girl’s numerous injuries. Gatto, in a recording of an interview with police, blamed the injuries on the girl’s clumsiness.

“When she’s walking, she trips over air,” Gatto, 44, of Wiscasset, said of the “accident-prone” 4-year-old.

Gatto made the statement during a nearly two-hour audio- and video-recorded interview with Maine State Police Detective Joshua Birmingham before her arrest.

A total of 15-20 distinct injuries were found on Kendall Chick’s body after she died, Assistant Attorney General Donald Macomber said on the first day of Gatto’s bench trial at the Capital Judicial Center in Augusta. Maine Superior Court Justice William R. Stokes is hearing the case and will determine the verdict.

The prosecution, including Macomber and Assistant Attorney General John Alsop, argues that Gatto beat Kendall Chick to death. Gatto’s defense attorneys, Philip Cohen and Jeremy Pratt, claim the girl was accident-prone and her death was an accident.

Cohen and Pratt chose not to make an opening statement until after the prosecution presents its case. The defense team spoke very little during the first day of the trial.

Macomber started the prosecution’s opening statement by repeating, “She was fine 10 minutes ago,” ending each sentence by showing a photo of Kendall Chick’s battered 30-pound body.

“As you can see, your honor, Kendall Chick was not fine 10 minutes ago,” Macomber said.

Gatto recited the sentence – “She was fine 10 minutes ago” – to investigators and to Stephen Hood, her fiancee and Kendall Chick’s grandfather.

Chick lived with her grandfather, Stephen Hood, and Gatto, her primary caregiver, at 19 Crickets Lane in Wiscasset. The Maine Department of Health and Human Services placed her in the home in January 2017.

According to Gatto, Kendall Chick was only going to stay at their residence for 15 days due to legal issues involving her mother, Alicia Chick, but the girl stayed and Gatto had essentially raised her since she was 8 months old.

According to Macomber, after raising two of her own children, Gatto became the primary caregiver for Kendall Chick and had “near-exclusive control” of her two grandchildren, another 4-year-old and a 9-month-old.

The prosecution played the 911 call from Dec. 8, 2017, on which Hood and Gatto can be heard. They were instructed to perform CPR by the dispatcher. At the time, Kendall Chick was unconscious.

Alsop then asked Advanced Emergency Medical Technicians Anita Sprague and Tanya Bailey, as well as Paramedic Stephen Harrison, who responded to the home, to take the witness stand. Dr. Eric Sampson, the attending emergency room physician at Mid Coast Hospital on Dec. 8, was called to the stand later.

Sprague described the environment at the house as “odd.” The first room the three entered was dark and “nobody was hysterical.”

“She was lifeless, lying there limp,” Sprague said of Kendall Chick, who was lying on a towel in Gatto’s bathroom.

Sprague noticed that the right side of Kendall Chick’s head was “deformed” and “squishy,” and that she had a deep purple, swollen right eye.

Sampson said the bruise on her head appeared older, though he could not tell exactly when the injury occurred. He said her head injury was “very unlikely to represent an accidental injury.”

The afternoon featured audio of Gatto and one of her sons speaking with Lincoln County Sheriff’s Office Detective Jared Mitkus before, during, and after arriving at the sheriff’s office in Wiscasset, along with the audio and video recording of Birmingham interviewing Gatto.

The interviews took place the day Kendall Chick died. In both instances, Gatto referred to the toddler as “accident-prone.”

Though Mitkus told Gatto she could speak as much or as little as she wanted to on their drive to the sheriff’s office, she continuously spoke about Kendall Chick.

Before Birmingham came to the office, Mitkus was recording audio when Gatto received a text that Kendall Chick had died. Loud cries could be heard. In the courtroom, Gatto dabbed her face with a tissue.

During the interview with Birmingham at the sheriff’s office, Gatto described Kendall Chick as “such a sweet little girl, so happy-go-lucky.” She also referred to her as a “drug baby” and “lazy.”

She would walk into walls while looking at someone, and fall without catching herself, Gatto said.

“If you asked her, ‘How do you fall?’ she would put her hands out, but she wouldn’t do it,” Gatto said. In the video, she re-enacted Kendall Chick falling, showing she would keep her hands to her side.

But Gatto said the girl had not had any accidents the day of her death.

“She was fine, and then she wasn’t fine,” Gatto said.

The trial resumed Tuesday morning. Stokes said the trial could potentially go into next week.