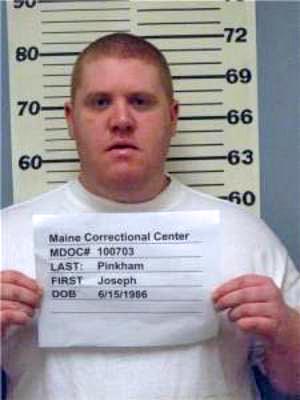 Joseph F. Pinkham, 31, pleaded no contest to class B possession of sexually explicit materials during a hearing at the Lincoln County Courthouse in Wiscasset. The charge specifies materials depicting children under the age of 12.

Pinkham also admitted to a probation violation. He will serve a three-year probation revocation. For the new crime, he received a fully suspended 10-year prison sentence, plus 12 years of probation. He is in custody at the Maine Correctional Center in Windham.

Pinkham was arrested Aug. 2, 2016 after a joint investigation by the Lincoln County Sheriff’s Office, the Maine Department of Corrections, and the Maine State Police Computer Crimes Unit, according to Assistant District Attorney Matthew Kanwit.

A search of electronic devices seized during a search of Pinkham’s residence revealed evidence that “fit the definition” of the charge, Kanwit said, which is to intentionally or knowingly possess or access material that depicts a child under the age of 12 engaging in sexually explicit conduct.

His probation conditions require sex-offender treatment and prohibit contact with children under 18, possession or use of electronic devices capable of internet access, and possession of sexually explicit materials.

Pinkham was already a lifetime registrant on the Maine Sex Offender Registry for five previous convictions of possession of sexually explicit materials stemming from incidents in 2012 and 2013.