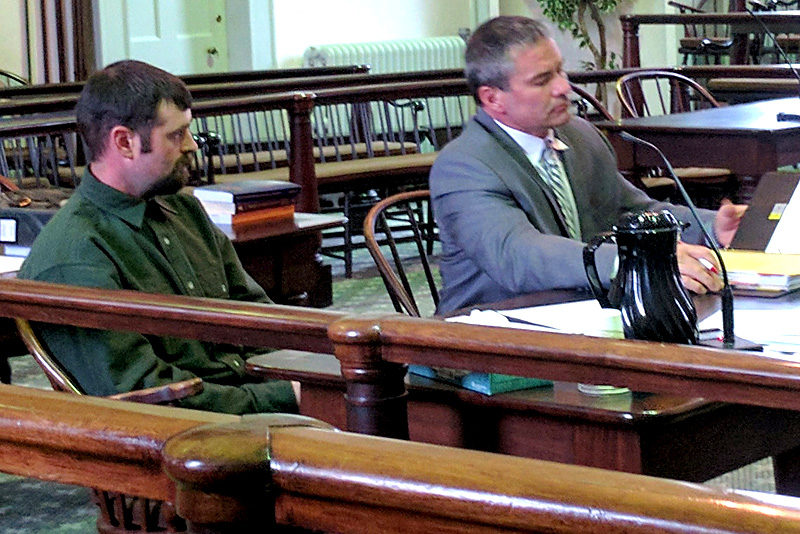 After two days of testimony and more than an hour of deliberation, a jury found a Waldoboro man guilty of operating under the influence, but not guilty of causing the death of a Waldoboro bicyclist in an accident in Waldoboro on Nov. 22, 2014.

Moran was driving a 1999 GMC Yukon SUV on Feyler’s Corner Road in Waldoboro around 8:30 p.m., Nov. 22, 2014, when he struck and killed his friend, Jessie Hayden, of Waldoboro, who was riding a bicycle near the centerline of the road.

Hayden lived nearby and Moran was on his way to pick him up at the time of the accident. Hayden was pronounced dead at the scene by Waldoboro Emergency Medical Services.

The trial started the morning of Thursday, Oct. 27 and concluded with the jury delivering its verdict the afternoon of Friday, Oct. 28.

The state’s final witness was Sgt. Darren Foster, of the Maine State Police Crash Reconstruction Unit. A 20-year veteran of the state police, Foster responds to the scene of serious accidents to try to determine the cause or causes of a crash with forensic mapping and other techniques.

Though there was no posted speed limit where the fatal collision occurred, Foster said the statewide speed limit in such rural settings is 45 mph.

Foster said evidence, including scuff marks from both the SUV and the bicycle, indicated that the bicycle, which had been traveling north, was struck 8.2 feet from the northbound edge of the roadway.

Moran’s truck had been traveling south at the time of the crash.

“Based on the dimensions of the road, that would be just to the left of where the centerline would be?” Rushlau said. Foster said it would have been.

Foster said he saw no signs of braking in the area of the collision. He used a formula to calculate Moran’s speed, producing a range of possible speeds for the SUV at the time of the crash, the average of which was 43 mph.

Foster said that as part of his reconstruction work, he determined speed was not a factor in the collision.

Upon cross-examination from Cohen, Foster said he found no evidence of erratic operation on the part of Moran and the primary cause of the accident was a bicycle operating near the center of the road.

The final witness on the previous day of the trial was Maine State Police Sgt. Christopher Rogers.

Rogers conducted the vehicle autopsy at Hillside Collision Center, of Waldoboro, in January 2015.

Rogers said the first part of his inspection was collecting tire data. His inspection determined the tires of Moran’s vehicle were in an overall poor condition, with the left front tire differing in size from the other three.

Rogers said he found that while the vehicle’s front disc brakes were operational, the rear drum brakes were not functioning.

“Both front tires locked, both back tires continued to spin, indicating the back brakes were not operational,” Rogers said.

Rogers said his analysis of the vehicle’s headlights pointed to the potential the truck’s driver’s side headlights were not illuminated during the crash and that the functioning lights of the vehicle were on low beam at the time of the collision.

The trial’s final witness, and the only witness for the defense, was Moran.

Moran described driving the truck in its proper lane when he came upon Hayden riding his bicycle in the middle of the road.

“There was no time to brake, no time to swerve. I just saw something right in front of me,” Moran said.

A blood test conducted at the scene about 40 minutes after the crash revealed a blood-alcohol level of 0.144. The legal limit in Maine is 0.08.

On Thursday, Oct. 27, the trial started with opening statements from the prosecution and the defense.

“This event, in many respects, will appear to you to be a horrible tragedy, but tragedies can also be crimes,” Rushlau said.

Rushlau gave jurors a brief overview of the evening of the fatal accident.

“No one will say (Moran) was falling down drunk. That is not the law in Maine,” Rushlau said.

Waldoboro Police Officer Thomas Bartunek was the first member of law enforcement to arrive on scene. According to Rushlau, Bartunek observed signs of alcohol use on Moran, and Moran told Bartunek he had had one beer.

Bartunek and Waldoboro Police Chief Bill Labombarde said it appeared Moran fell asleep more than once during the investigation of the accident, according to Rushlau.

The defense’s opening statement also acknowledged the tragic nature of the case.

Cohen made several points to dispute the state’s description of his client as intoxicated.

He said that after the crash, Moran was in the ditch with his cellphone on speaker listening to a dispatcher’s instructions about how to perform CPR and following the steps.

“This is the intoxicated man they want to show you in this trial,” Cohen said.

Cohen said the accident occurred on a dark country road with the bicycle in the middle of the road. Hayden was not wearing reflective gear or a helmet at the time of the accident.

“There is absolutely nothing Moran could have done to avoid that collision,” Cohen said.

Furthermore, Cohen said his client was cooperative throughout the entirety of the evening, understood all questions asked of him, and did not slur his speech in his interactions with paramedics, police officers, and bystanders.