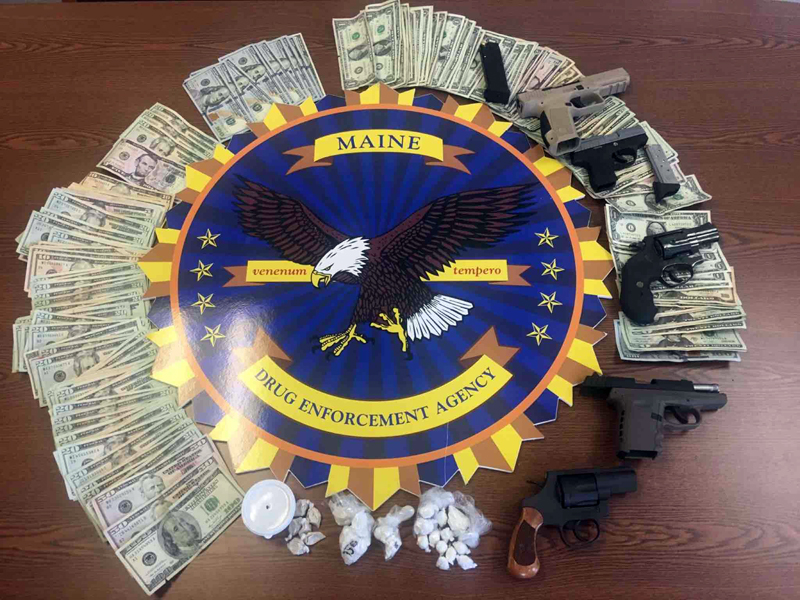 About $10,000 of crack cocaine and heroin, about $4,000 in cash, and five handguns were among the contraband seized during a drug bust in Augusta the morning of Tuesday, Dec. 20. Two Wiscasset women are among the 12 people who face charges in the investigation.

Two Wiscasset women were among 12 people arrested at five locations in Augusta on Tuesday, Dec. 20 as the result of a several-months-long investigation into the sale of crack cocaine and heroin in Augusta and the Midcoast.

Dixie Gauthier, 38, of Wiscasset, and Lisa Gosselin, 41, of Wiscasset, face one charge each of class A aggravated trafficking in schedule W drugs, according to a press release from Maine Department of Public Safety spokesman Stephen McCausland. The charges are aggravated because police say Gauthier and Gosselin trafficked drugs in a “drug-free safe zone.”

Law enforcement seized about 50 grams of crack cocaine; 12 grams of heroin; five handguns, including at least one stolen firearm; and about $4,000 in cash believed to be the proceeds of drug sales, according to the press release. The street value of the drugs is estimated at $10,000.

Dalene Black, 34, of Augusta, and Emmanuel Rocgue, 39, of Augusta, face one charge each of class A aggravated trafficking in schedule W drugs. The charges against Black and Rocgue are aggravated due to the alleged presence of a handgun.

Jessie Clark, 34, of Augusta, Corey Collamore, 30, of China, and Philip Theriault, 43, of Augusta, face one charge each of class A aggravated trafficking in schedule W drugs. The charges against Clark, Collamore, and Theriault are aggravated because police say they trafficked drugs in a safe zone.

All 12 were taken to the Kennebec County Jail.

The investigation is continuing and more arrests are likely.