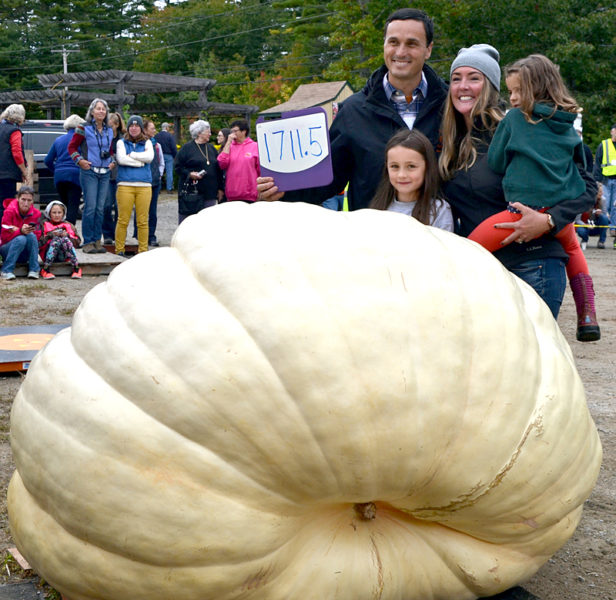 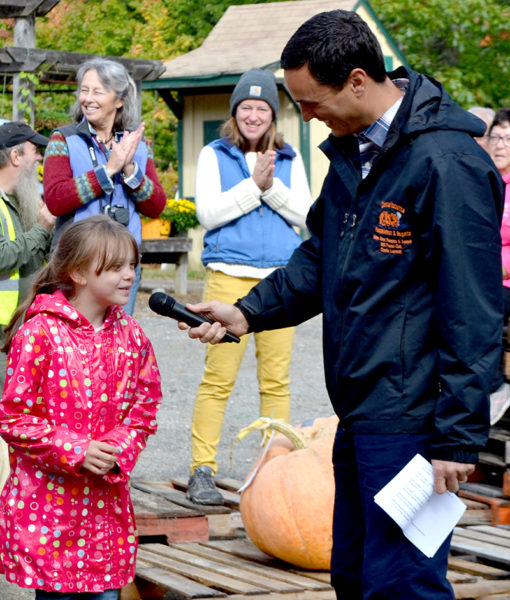 Megan Herrick, of Washington, answers a question from master of ceremonies Charlie Lopresti during the Damariscotta Pumpkinfest’s annual weigh-off at Pinkham’s Plantation in Damariscotta on Sunday, Oct. 2. Herrick said it was her first year competing in the weigh-off and she plans to grow another pumpkin next year. (Maia Zewert photo)

Charlie Lopresti, the event’s master of ceremonies, took first place with a pumpkin weighing in at 1,711.5 pounds.

Lopresti, of Buxton, previously took first place in the competition in 2012 with a 1,332-pound pumpkin. This year’s fruit was a personal best, he said.

“We’re very happy with the new personal best, because the whole family played a role in this one,” Lopresti said.

Lopresti’s wife, Morningstar, and his daughters, Maris and Catherine, assisted in the care of the pumpkin. His father-in-law even gave up his space heater to keep the pumpkin warm, Lopresti said.

In addition to his family’s help, Lopresti also credited the year’s perfect growing conditions and the pumpkin-growing community across the state.

“It’s a great community we have here,” Lopresti said. “Everyone is really supportive and comes together to share ideas and growing techniques with one another.” 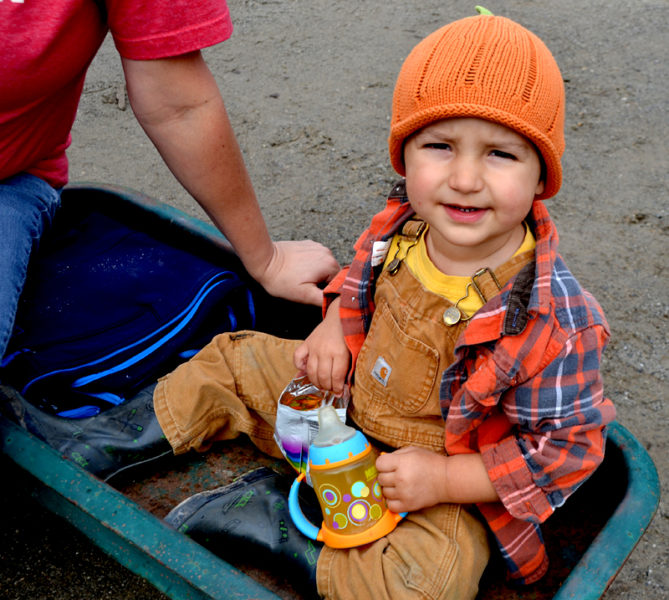 Lopresti’s pumpkin fell just short of the state record. Edwin Pierpont, of Jefferson, currently holds the record, which he set last year with a 1,727.5-pound pumpkin.

This year, Pierpont took third place in the giant pumpkin division with a 1,229-pound pumpkin. His son, Justice Pierpont, took first place in the youth pumpkin-growing competition with a pumpkin weighing 1,233.5 pounds.

Damariscotta Pumpkinfest co-founder Bill Clark said it was the first time a pumpkin in the youth division weighed in at more than 1,000 pounds.

While his pumpkin was being weighed, Justice told Lopresti this was his “sixth or seventh” year of growing giant pumpkins. Justice’s goal for this year was to grow a larger pumpkin than his father, which he did by 4 1/2 pounds. 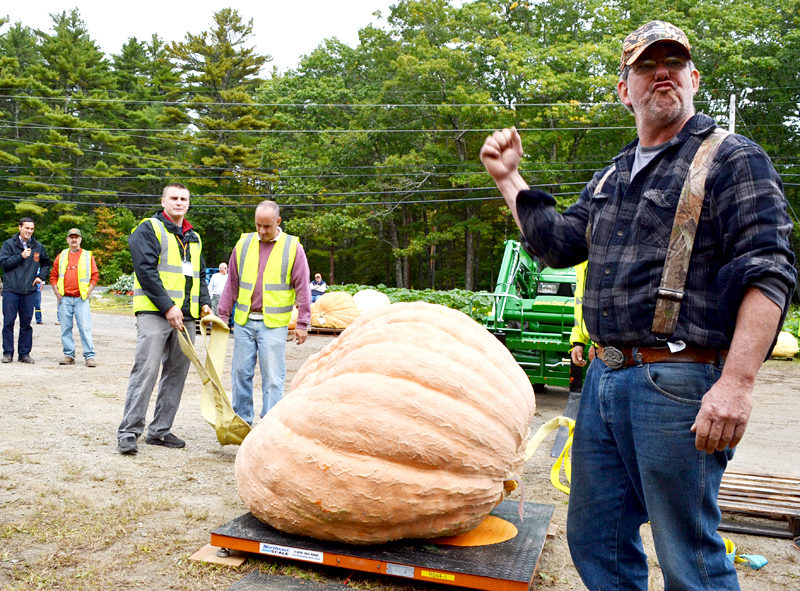 Elsewhere in the weigh-off, Pumpkinfest volunteer Curt Crosby, of Edgecomb, brought in a pumpkin weighing in at 1,155 pounds, more than double his previous personal best. Crosby said he wanted to bring in a pumpkin that weighed more than 1,000 pounds this year.

Elroy Morgan, of Charleston, took second place in the giant pumpkin division with a 1,477-pounder. Morgan also brought in the sole entry for the long gourd division, which measured 122 inches.

Any grower who brought in a pumpkin weighing more than 1,000 pounds received an embroidered Pumpkinfest jacket.