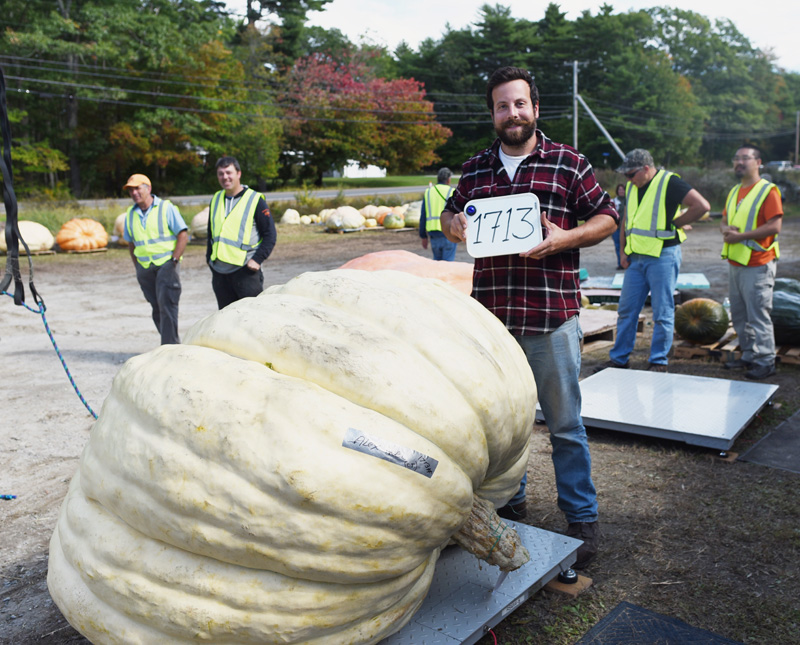 The 12th annual Damariscotta Pumpkinfest kicked off with a weigh-off full of both triumph and loss, as one giant pumpkin nearly cracked the event’s record, while another cracked itself en route to the event.

The winning white pumpkin, grown by Alex Noel, of Abington, Conn., weighed in at 1,713 pounds.

Noel said he had never gone to the weigh-off in Damariscotta before, but wanted to check it out and meet Maine pumpkin growers.

Connecticut’s state record is from 2015, when a 1,992.5-pound pumpkin grown in Connecticut was weighed at the Topsfield Fair in Massachusetts.

The pumpkin was just 43 pounds shy of the 1,756-pound Maine record, set by Elroy Morgan, of Charleston, at the Damariscotta event last year. This year Morgan’s entry took second place, at 1,695 pounds.

Noel said he has been growing giant pumpkins on and off for the past 15 years, and this year’s pumpkin was the largest he has ever grown. His previous personal best was a 1,223-pound pumpkin in 2007.

For his prize-winning pumpkin, Noel received $2,500 and a plaque.

Noel thanked the volunteers at the event, as well as event co-founders Bill Clark and Buzz Pinkham, owner of Pinkham’s Plantation. “They were very accommodating,” he said.

One participant who was not as fortunate was Matt Tate, a first-time grower from Massachusetts.

Tate said he attended the festival last year and found leftover pumpkin seeds on the ground. He decided to bring them home and try to grow a pumpkin for this year’s event.

He grew a giant, but on the trip from Massachusetts to Damariscotta, the pumpkin split when he hit a bump in Brunswick.

Even though the giant pumpkin, gushing out water and seeds, was no longer eligible for the contest, Tate was all smiles as volunteers weighed his damaged pumpkin.

Tate’s pumpkin weighed in at 901 pounds, which master of ceremonies Charlie Lopresti said meant the pumpkin had probably been over 1,000 pounds before it started losing its insides.

One thing all the pumpkin growers had in common this year was difficult weather during the growing season.

“It was a tough year for everybody, nationwide,” Clark said.

In spite of the weather, Sarah Whitty, of Veazie, managed to come in third place with a 1,521.5-pound pumpkin, her first fruit weighing over 1,000 pounds since she started entering the contest.

Whitty, who was wearing a sweatshirt that said “great pumpkin believer,” said she named her pumpkin “Watson” due to the amount of electricity it took to grow it.

It is tradition for those who grow their first pumpkin over 1,000 pounds to get a Pumpkinfest jacket.

Murphy’s 1,232.5-pound bright-orange pumpkin won the Howard Dill Award for being the prettiest pumpkin over 500 pounds.

The adult giant squash division had two entries, with Lopresti winning first for his 598-pound green squash. He said that in the five or six years he has tried to grow giant squash, this was the first one that made it to a scale.

Joseph Gaboury, of Readfield, took second with his 339.5-pound squash.

Damariscotta Pumpkinfest will continue with its most popular events, including a pumpkin drop and pumpkin-boat regatta, throughout Columbus Day weekend.

For more information on the weigh-off and the rest of Pumpkinfest, pick up a copy of The Lincoln County News’ Sept. 27 special section at locations around the Twin Villages or visit mainepumpkinfest.com.