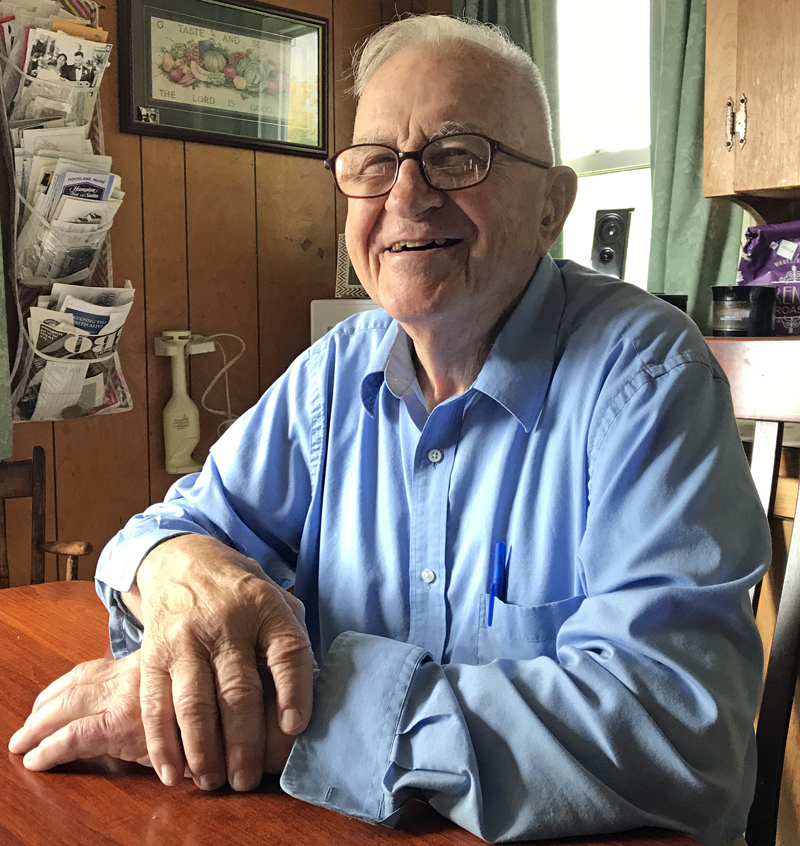 An 18-year-old from North Whitefield was at his post in the engine room, which kamikazes would target in an attempt to disable ships, when a Japanese plane set its sights on the USS Goodhue off Okinawa on April 2, 1945.

The Goodhue’s guns knocked the plane off course and it slammed into the mainmast instead. Former U.S. Navy Electrician’s Mate 3rd Class Albert R. Boynton, now 91, remembers vividly the collision and the chaos that followed.

Boynton was born May 18, 1926 in the building known as the mill camp on Clary Lake. He was the youngest of seven children. The family moved across the street when he was an infant, and he has lived in the same house on Mills Road ever since.

His father, Chester Boynton, ran a sawmill back across the road, and the kids helped out around the mill.

His mother, Addie Knight Boynton, died in January 1933, when Albert was 6. A couple months later, his father lost the mill and several woodlots he owned in the area, a casualty of the Great Depression.

“We had a horse and a cow and they were our salvation,” Boynton said. The family kept a garden and Boynton’s uncles would sometimes give them venison, but times were lean. Boynton’s father made oatmeal for breakfast every day – if he could afford it.

On Sept. 21, 1938, a powerful hurricane swept through southern New England. The storm, which would become known as The Great Hurricane of 1938, was one of the most destructive ever to strike the region, according to the National Weather Service.

Suddenly there was work available to rebuild the region. “Everybody here, from Maine, if they had an ox or a pair of horses, an old truck, they headed for New Hampshire,” Boynton said.

“It was a time for faith,” he said. His father sold the cow. With $30 from the sale and a $20 gold piece, he moved himself and two of his older sons to New Hampshire for work in the logging industry.

Soon the rest of the family followed. “An act of God brought us out of the Depression,” Boynton said. The family stayed two years. They didn’t even lock the house. When they returned, everything was as they had left it.

Boynton attended North Whitefield Grammar School, just a quarter-mile from home on Mills Road. He graduated from Erskine Academy in 1943.

He was a student at the University of Maine at Orono when he volunteered for the U.S. Navy a few days before his 18th birthday.

It was a couple weeks before D-Day in Europe, but Boynton’s World War II service would be on the other side of the world, in the Pacific theater. 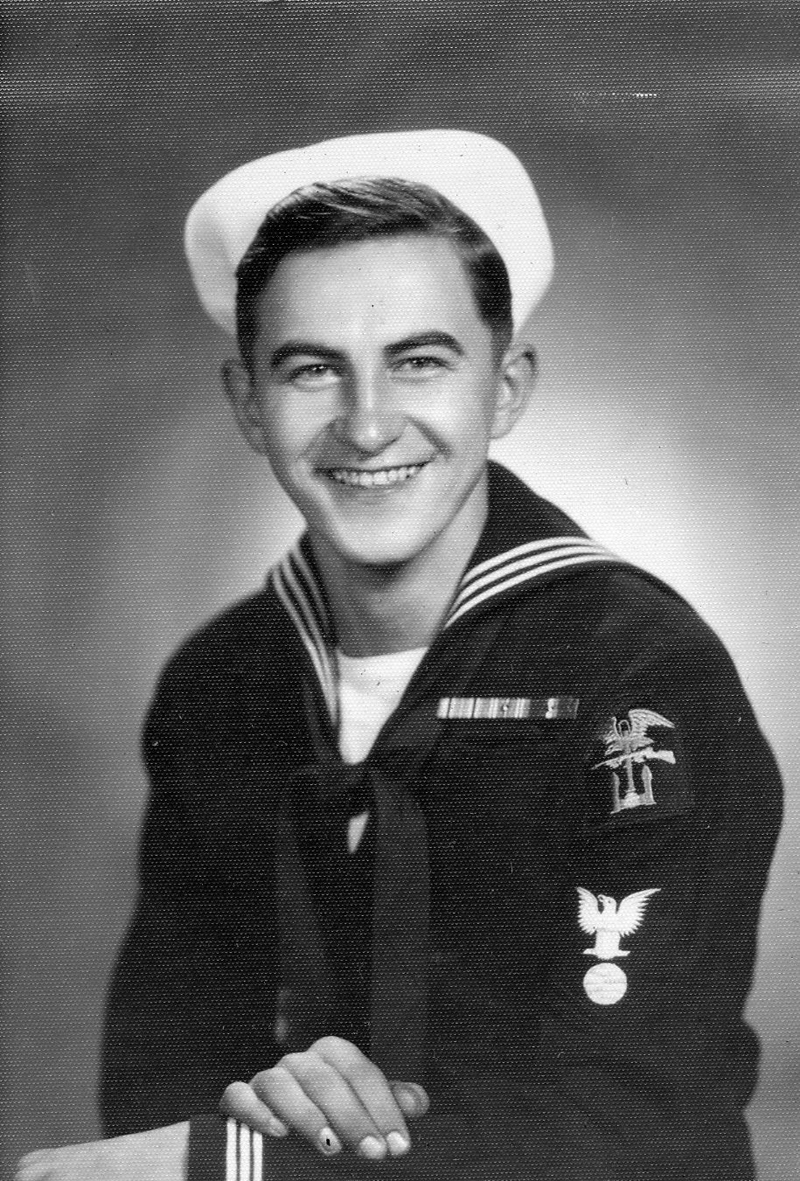 A young Albert R. Boynton in his U.S. Navy uniform.

After eight weeks of boot camp at the Sampson Naval Training Base in New York, he trained as a fireman in Philadelphia, learning how to operate boilers on a ship. Later, he crossed the United States by train for Naval Station Treasure Island in San Francisco Bay.

With the days of flour pudding still a recent memory, the food in the Navy was “very good” by comparison, Boynton said. “I’d never had cantaloupes before. I’d never had a lot of stuff they had in the Navy.”

He was eventually assigned to the USS Goodhue, which departed on its first voyage across the Pacific in January 1945. The Goodhue was a transport ship, with capacity for 1,500 troops. It traveled in a convoy with destroyers on either side for protection.

“We had a few dust-ups,” Boynton said. “You’d get this ‘ding-ding-ding-ding-ding,’” he said, and a call would go out: “’General quarters. All hands man your battle stations.’”

By this time, Boynton was an electrician apprentice responsible for the operation of the ship’s air- and water-cooling systems and the lifts that raised and lowered its landing craft.

“My battle station was repair engine room, so I was just outside the engine room,” he said.

On its way to Okinawa on April 2, 1945, the Goodhue and several other transports, along with their escorts, came under attack by kamikazes.

The Japanese pilots would aim for a ship’s bridge or engine room on their suicide missions. “If they could knock out the engine room, if they got you dead in the water, they could pound you at will,” Boynton said.

The one that attacked the USS Goodhue was knocked off course by the Goodhue’s gunners and slammed into the ship’s mainmast at 6:50 p.m., according to an excerpt from the ship’s log on the website Warfare History Network.

“It sprayed shrapnel all over the rear of the ship, so it killed almost all of the men on the guns,” Boynton said.

The strike killed 27 and wounded 117, according to the Warfare History Network.

“Down in my battle station, when the plane hit, it vibrated the whole ship,” Boynton said. “I thought we were going to be going swimming.”

The ship’s crew started to bring down dead sailors. “It was extra wide where our battle station was, so they used it for the morgue,” he said.

Some of Boynton’s friends and acquaintances were among the dead, including a cook with the nickname “Gizmo” and a mealtime companion who was in the crow’s nest when the plane struck the mainmast.

While Boynton survived unscathed, sailors with the same duties on nearby ships were likely not as fortunate. “The Henrico was right next to us and one plane went over our ship and went right into the side of the Henrico, right into the engine room,” he said.

The Goodhue kept moving and, with other damaged ships, sheltered in a cove off the nearby island of Kerama Retto for about a week.

The ships used machines to fill the cove with artificial fog as a screen against attacks from the air. Even so, the Japanese would bomb the area at night.

“We would hear, at night, 100 planes overhead,” Boynton said. Navy planes would chase the Japanese planes away, but even with the fog and protection from the air, “you would wake up in the morning and see a ship on fire here, a ship on fire there.”

Eventually the Goodhue delivered its troops and returned to the U.S. to pick up more.

In August 1945, the USS Goodhue was on its way to Japan to bring troops for the Allied invasion. But on Aug. 6 and Aug. 9, the U.S. dropped atomic bombs on Hiroshima and Nagasaki, and Japan surrendered Aug. 15.

The Goodhue continued to Japan to pick up prisoners of war. The ship picked up a Japanese pilot to guide it through minefields on the way to Yokohama in Tokyo Bay.

Some of the prisoners had been in Japanese custody for years and were in “pretty bad shape,” Boynton said. The Goodhue needed more cooks to feed them. Boynton had a little experience from his time at Treasure Island, and was pressed into service.

“These guys were taking half a loaf of bread,” he said. “They said it tasted like cake to them. They couldn’t seem to get enough.”

The Goodhue brought troops back to the states, then sailed through the Panama Canal and up the East Coast to Virginia, where it was decommissioned. 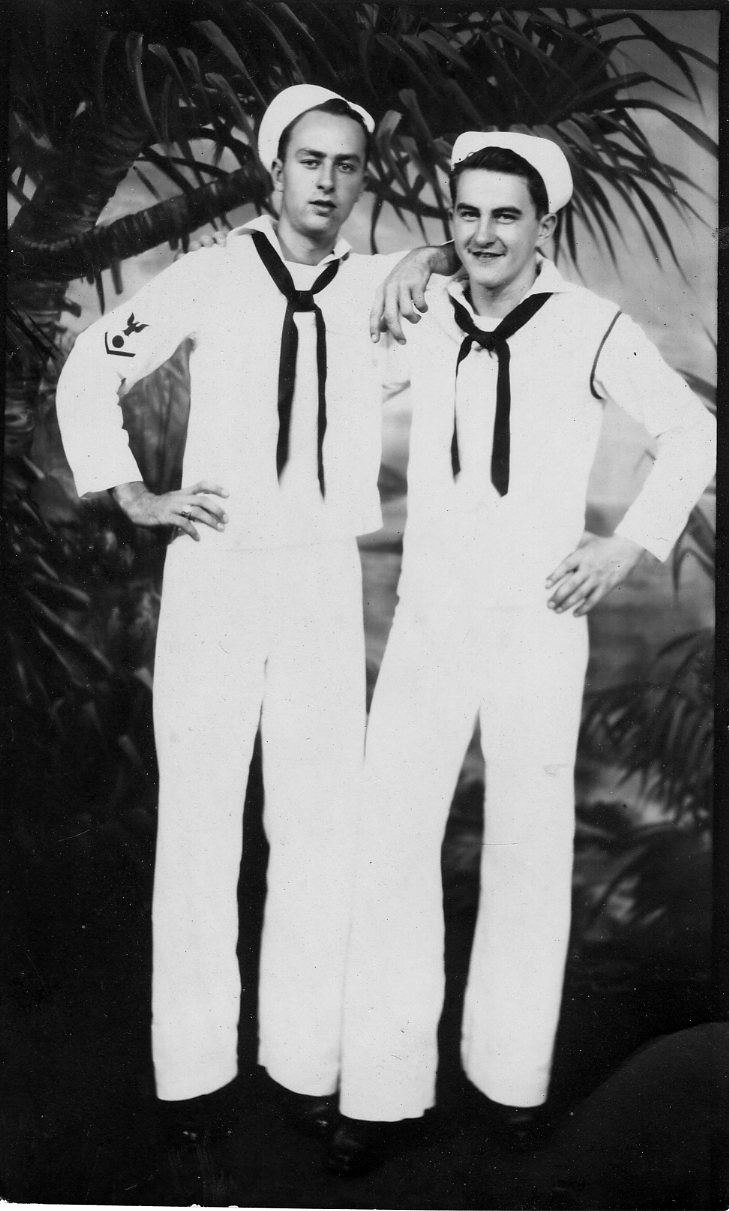 Albert R. Boynton (right) with John Henry Hawkins. The sailors served together on the USS Goodhue in the Pacific theater of World War II and remain friends more than 60 years later.

Back in the states, the Navy assigned Boynton to shore patrol at Fenway Park, home of the Boston Red Sox. Fenway had a section in right field where servicemen could go to the games for free.

“I was there for about 14 games,” he said. Ted Williams was back with the Sox after serving in the Navy Reserve during the war, and Dom DiMaggio, “The Little Professor,” was in center field.

After shore patrol, Boynton was assigned to the USS Cherokee, a seagoing tugboat that was towing decommissioned ships from Boston Harbor to Rhode Island.

Boynton was discharged June 6, 1946. He went back to UMO on the GI Bill and graduated in 1950 with a degree in agricultural engineering. After college, he started a dairy farm with his oldest brother, Alden Boynton.

To avoid going into debt – his father’s experience with the sawmill was still fresh in his mind – he also worked as a nursing aide at Togus, the U.S. Veterans Administration facility in Augusta.

While there, he met a nurse, Carolyn, who would become his wife. “I always figured it was an act of God that I went up to the VA,” he said. “She came in there the same time I did.”

In the early days of their courtship, they had to keep the relationship a secret from the chief nurse, a by-the-book Army officer.

“If she found out that a nurse was going with an aide, she would fire one or the other, because that was fraternization,” Boynton said. When they married, the chief nurse transferred the new Mrs. Boynton to another part of the facility.

The Boyntons had been married 49 years at the time of Carolyn’s passing.

After a devastating fire brought his days as a dairy farmer to an end, Boynton became a rural mail carrier, a job he would keep for 30 years.

These days, he lives a quiet life at home. A devout Christian, he listens to the preacher David Jeremiah on the radio in the morning and remains active in his church, South Somerville Baptist.

He does the crossword and the jumble in the Kennebec Journal every morning and buys The Lincoln County News at Sheepscot General every Thursday. He writes letters to the editor when inspiration strikes, on subjects such as the NFL protests, politics, the war, and his 90th birthday celebration.

He belongs to a men’s group at Sheepscot General. “I’m the oldest one there now,” he said. He watches the Red Sox faithfully.

Once the youngest, he is now the patriarch of the family. His son and older daughter live in Whitefield and a younger daughter lives in North Carolina. He has one living sibling, a sister in Massachusetts, as well as 11 grandchildren, eight great-grandchildren, and practically countless cousins, nephews, nieces, grandnephews, grandnieces, and so on.

“I think that I’ve been greatly blessed,” Boynton said.