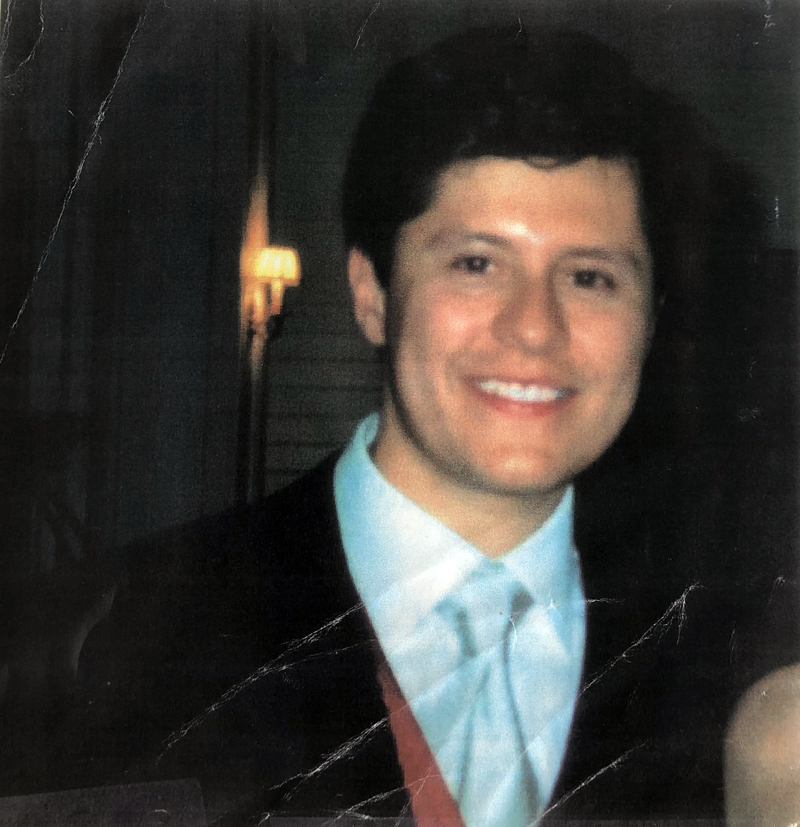 Cesar Augusto Murillo at his wedding less than a year before Sept. 11, 2001. Emily Greenberg and other friends of Murillo used this photo in the missing flyers that they posted around Manhattan in the days following the attacks in hopes of finding him in the hospital. (Photo courtesy Emily Greenberg)

Like countless Americans, Emily Greenberg of Bremen has a vivid memory of the morning of Sept. 11, 2001, and like too many, she remembers realizing that one her friends was in the World Trade Center when it collapsed.

The view of the World Trade Center on Sept. 11 from across Manhattan was exceptionally clear, although it poured the night before. Greenberg had an appointment on the upper west side of the island that morning and was making her way to her job selling ads for Fitness magazine.

As she made her way up the steps from the metro station to Fifth Avenue, the second Boeing 767 hit the south tower and she looked up to see two gaping holes in the New York skyline, framed by the Washington Square Park arch.

“The only thing you could hear was fire truck after fire truck, cop car after cop car just streaming downtown,” Greenberg said.

Greenberg was born and raised in New York, and the towers were as much pillars of her childhood as they were for the New York skyline. Her father worked on Wall Street and she has many fond memories of visiting his office on the 56th floor of the north tower. She even went on to write a poem about that time for a class at the University of Denver titled, “High Energy on Floor 56.”

“If you grew up in New York City they were a part of your life because you saw them all the time and they were so beautiful and elegant and they represented so much,” Greenberg said.

When she saw the south tower collapse, she was so stunned that it didn’t occur to her that her friend might be 104 stories up in the north tower.

Greenberg met Cesar Augusto Murillo through an ex-boyfriend who was Murillo’s fraternity brother at the University of Vermont. Even after she and her boyfriend broke up, Murillo remained a steadfast friend. That was just the sort of kind, funny and welcoming person he was, one who never said a disparaging word of anyone.

“He was everyone’s best friend … he was the kind of person that everyone just absolutely adored,” Greenberg said.

Murillo immigrated to America from Colombia with his family in 1971 when he was a toddler. He was the first member of his family to attain fluency in English and also the first to earn a college degree.

At age 32, Murillo had just married the love of his life, Alyson Becker, and started a new job as an equities trader for Cantor Fitzgerald on the 104th floor of the World Trade Center’s north tower.

Greenberg hadn’t seen Murillo in a while and didn’t think he had already started his job. He left her a message on her phone just a few days prior asking if she’d like to come play beach volleyball down at Pier 25, but she forgot to return the call. Like it does for so many 30-somethings knee-deep in their careers, life just got away from them.

Awe-struck by the smoldering towers, Greenberg remembered millions of pieces of paper floating down from the sky “like confetti.” Even from her faraway vantage point, Greenberg could see people falling, too.

Greenberg said she and the people around her convinced themselves that the individuals on the floors above the plane crashes could be rescued until the south tower collapsed at 9:59 a.m., and any sense of reality or security went with it.

“I was hysterical. I was screaming, I was hyperventilating, a man standing next to me just grabbed me and held me and tried to calm me down,” Greenberg said.

She didn’t see the north tower fall; she was in the elevator going up to the Fitness magazine office when it happened. It wasn’t until the next day, when one of her friends called her to ask about Murillo, that she realized that he was likely inside.

Greenberg said that Murillo was able to reach his wife on the phone after the plane crashed into the building. He told her that everything would be alright, and he had a plan to get down.

“He was probably comforting a lot of people and letting them know, ‘Don’t worry, we’ll get out of here’,” Greenberg said.

In the first 24 to 48 hours following the attacks, missing posters were plastered across lower Manhattan by survivors desperately seeking their friends and family.

Believing Murillo could have escaped the towers, Greenberg and her friends hit the streets with flyers. She used her media know-how to get them into the hands of Al Roker and Ed Koch.

Greenberg said that she saw Bill Clinton walking through Manhattan with his entourage of Secret Service agents.

He stopped to ask her about the man on her flyers, if he was her brother or boyfriend, and she broke down in front of the former president. He held her for a moment before his agents whisked him away.

Greenberg was asked to sing at Murillo’s funeral at Grace Church in Greenwich Village, as she had sung at his wedding. She sang “On Eagles Wings,” her knees shaking the entire time.

Greenberg said that Murillo had a tendency for almost inexplicable good luck. He once ended up in an elevator with Mariah Carey, and, even more amazing, he always found a parking spot in Manhattan.

His friends called it the “Cesar Murillo Factor.”

Greenberg was diagnosed with post-traumatic stress disorder in the aftermath of the attack, and she still grapples with the events of that day 20 years later.

She’s still angry, but she also believes that Murillo is still around her sometimes, bringing her the “Cesar Murillo Factor” in moments of good fortune or serendipity.

“Maybe I need to think about him and his love for life more often,” she said.