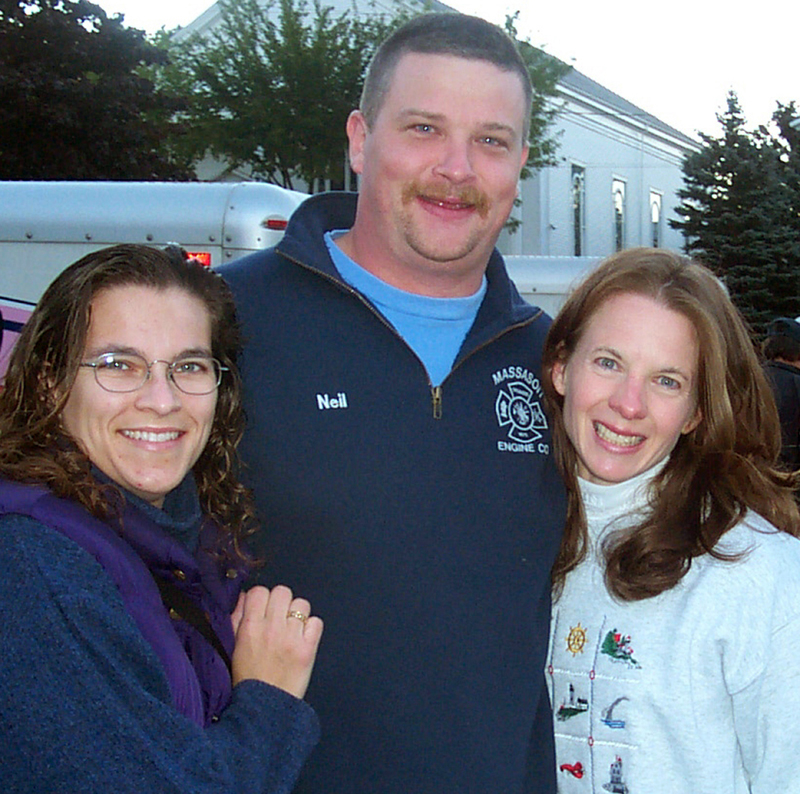 The terrorist attacks of Sept. 11, 2001, left an indelible impression on every American citizen and spurred Lincoln County residents to immediate and substantial action.

Lincoln County residents organized a relief convoy to deliver supplies to ground zero days after the attacks, raised over $30,000 in a fire department “boot drive” for families of fallen firefighters, and collected over 350 boxes of gifts for children.

“For one little county in Maine, there was a whole lot of support given to those folks in New York,” said Greg Latimer, a Lincoln County News reporter at the time, and a Damariscotta resident. He made the trip to ground zero with the relief convoy.

Latimer’s story of that trip was published on the front page of the Thursday, Sept. 20, 2001 edition of The Lincoln County News as “Destination: Ground Zero.”

Soon after the attacks, a candlelight vigil was held in Damariscotta, and then volunteers sprang into action.

Cynthia Simonds, Sarah Wentworth, and Neil Genthner, Jr., who was Damariscotta’s fire chief at the time, combined their efforts to organize a relief supply drive and eventual convoy to New York City.

The Salvation Army in Harlem was contacted to pinpoint what specific supplies were needed.

Then, through word-of-mouth, announcements on the Lincoln County fire radio, and an advertisement in the newspaper, the call was put out to residents.

“The idea was to bring down items that were specifically requested by the people at ground zero. Those included things like dust masks, sports drinks, bottled water, blankets,” Latimer said. “Based on what I saw at the time, there probably wasn’t a dust mask left in Lincoln County”

When the convoy left for New York City, it included six vehicles filled with volunteers and supplies.

Latimer said the volunteer crew was planning on dropping off the supplies in Harlem as quickly as possible then leaving so as not to be in the way.

“We didn’t want to impact the local area, we just wanted to get in, drop off our relief supplies, and go,” Latimer said.

However, once the convoy arrived, rescue workers at ground zero sent word that the dog booties were needed immediately at a forward canine aid station only a few hundred yards away from “the pile,” the still-smoldering mass of debris from the fallen twin towers.

Latimer said the search dogs were cutting their feet on the rubble from the pile. A group of Lincoln County volunteers, including Latimer, were shuttled within a few blocks of ground zero and had to walk the rest of the way to the canine aid station.

“It was a complete surprise and it was probably pretty moving for a lot of the people who were there,” Latimer said.

Latimer said that all the funds raised from the inaugural Pemaquid Oyster Festival in Damariscotta went to the boot drive.

Interim Newcastle Fire Chief Casey Stevens remembers local firefighters’ hearts being with the firefighters who were in New York on 9/11, some of whom they trained alongside.

“It was great that they allowed us to participate down there so we felt that we should support them and that’s when they did that fundraiser,” Stevens said of the boot drive.

Latimer said that 350 boxes were filled with eight to 10 gifts each, separated by age group and gender, to be distributed to children whose families were affected by the attacks.

There is one picture Latimer took, where the convoy volunteers are looking behind them in shock at the devastation at ground zero, that Latimer said encapsulates how everyone was feeling at that unexpected moment—a mix of shock and horror.

“The looks on their faces says a lot,” Latimer said.