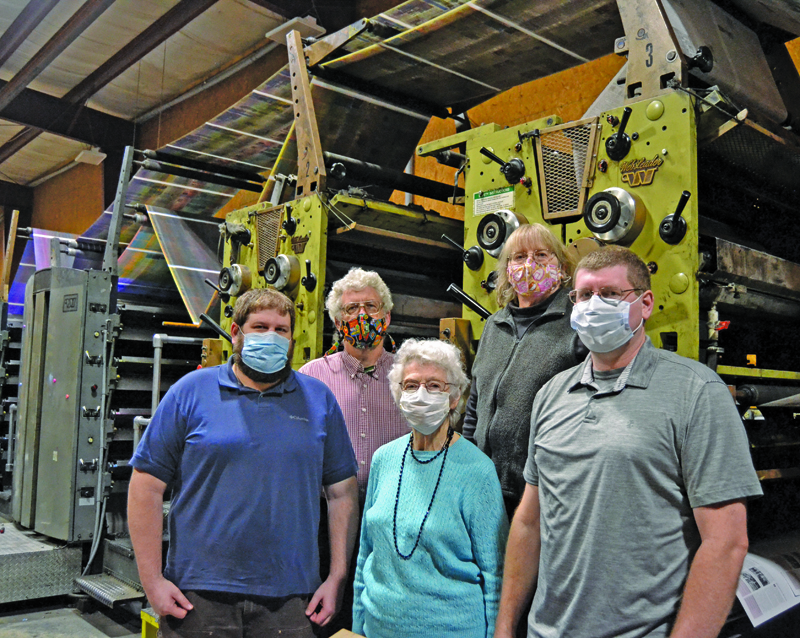 From left: Allan, Chris, Abbie, Paula, and John Roberts stand in front of the newspaper press at The Lincoln County News’ headquarters in Newcastle.

This edition of The Lincoln County News is very special, as it marks the completion of 100 years of family ownership of the newspaper. What makes up 100 years and what does this really look like?

It is the culmination of a century of community journalism, an estimated 100,000 pages of content and millions of hours of effort from hundreds of people. It is more than a lifetime’s worth of covering midnight breaking news, wading through municipal meetings, and capturing the stories and voices of this county’s residents, preserving them for future generations.

This copy of the paper is the 5,313th consecutive edition of the LCN under this masthead and name. Of these editions, 5,218 were published by the Erskine-Roberts family. Six generations have worked on the paper in some capacity.

Our duty began with the Dec. 9, 1920 edition, after Samuel H. Erskine bought the paper from Alice Gray. Erskine published 1,185 editions before passing the reigns to his daughter, Dorothy Roberts, on Aug. 26, 1943. She published 879 editions before Samuel E. Roberts took on the publisher’s role on June 30, 1960. He went on to publish 1,685 consecutive editions before passing the torch to our current publisher, Christopher A. Roberts, on Oct. 15, 1992. He currently has 1,469 editions under his belt, in case you were counting.

Along with the publishers, many other family members have played key roles in the paper. Abbie, Sam Roberts’ wife, was a longtime editor of the paper. All four of their children worked at the paper early on, from helping with the newspaper to writing columns.

Paula, Chris’ wife, has been a sports reporter at the paper for more than 30 years. Both of their boys, John and Allan, work at the paper each day as associate publishers.

The sixth generation has already made an appearance, as Matthew Roberts has helped on Wednesdays during production in the summer. It is likely that his younger brother, Thomas, and cousins, James and Michaela, will make their contributions in the near future.

Each and every week, our local, dedicated team works to bring the paper together in a consistent, professional manner and to deliver it on time. It is these hardworking individuals who produce the paper each week, as they and their predecessors have alongside the family every step of the way the past 100 years.

There have been many changes with the newspaper since 1920, challenges that were overcome and innovation at every step.

Operations were moved to Church Street until transitioning to the present-day location at 116 Mills Road in Newcastle in November 1982. Continuous improvements have been made to keep up with technology, improve the paper, produce it more efficiently, and reduce the impact on the environment.

Today, the building has two solar arrays on the roof that generate more electricity each year than is used to produce the newspaper. The press room is heated and cooled by a geothermal system. Most of the rest of the building is conditioned by energy-efficient mini-splits.

Newsprint is purchased by the truckload from a regional mill that is committed to sustainable forestry practices. Direct computer-to-plate technology is used to reduce chemicals needed to process photos and develop plates. The ink used to print the paper is soy-based and made here in the USA. Feel good about picking up your copy of the paper to read, and please recycle it once you are done.

We strive to produce local news with local people, using as many local resources as possible. This extends to our electronic presence, the website lcnme.com. This website was designed in-house and is hosted in-house using our locally provided fiber-optic high-speed internet connection through Tidewater Telecom. On premises, solar power is used to keep the servers running.

The community we serve has evolved, and we have worked to keep up. The community support from you, our dedicated readers and our faithful advertisers, is truly remarkable. We are honored to be the shepherds of this newspaper and to present the local news and happenings of Lincoln County. We look forward to serving this remarkable community for the next 100 years. Thank you for your support — this is your newspaper and we are honored to serve you.