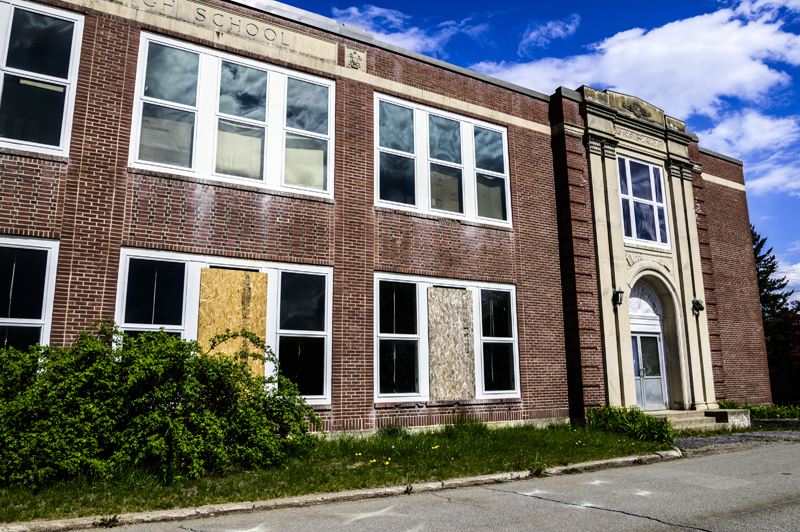 Boards cover broken windows on the front of the A.D. Gray building in Waldoboro on May 14. The brick facade that covers the building has been deemed unstable and the building may need to be demolished.
(Bisi Cameron Yee photo, LCN file)

A structural analysis of the A.D. Gray school building in Waldoboro found issues that will make it difficult to keep the building intact. Town manager Julie Keizer informed the board of selectmen of the findings during their meeting on Tuesday, Sept. 28.

The A.D Gray school, built in 1935, has been vacant since 2009. In 2012, the Central Lincoln County YMCA entered an agreement with the town of Waldoboro to repurpose the building as a YMCA facility, but withdrew from the project in 2015.

In November 2020, Waldoboro voters favored the transfer of A.D. Gray to Volunteers of America for $1, indicating as much in a nonbinding referendum by a more than 4-to-1 margin.

Volunteers of America, the largest nonprofit provider of affordable housing in the United States, had plans to redevelop the existing building as affordable senior housing. A competing proposal to demolish the building in favor of a park was defeated in a June 2021 vote, affirming Waldoboro residents’ support for senior housing and their wish to preserve the historic building.

Keizer said preservation of the building was the reason a lot of people supported the VOA plan, but it may no longer be economically feasible for the non-profit organization.

An effort to place A.D Gray on the National Historic Register to obtain tax credits to mitigate the cost of renovation failed.

According to Town Planner Max Johnstone, while the building has a lot of local history, interior renovations completed by the YMCA in 2012 disqualified it from consideration.

After the June vote, VOA proceeded with a structural engineering assessment and found that the brick facade has significant issues and is not stable.

According to Keizer, the facade is not anchored to the structure; it is supported by the ledge it was built on.

Keizer likened the issue to the 19th-century Wawenock Block building in downtown Wiscasset that needed emergency stabilization after hundreds of bricks fell from the building’s facade in April of this year.

“We’re going to have to fence it. It’s a safety issue,” Keizer said “We know it. We have to take action to correct it.”

Selectman Bob Butler said fencing the building does not imply there is imminent danger, calling it a preventive measure.

But the facade is not the only problem.

Additional structural renovations and structural reinforcement is needed, and encasing the building to address mold conditions would be costly.

According to Keizer, VOA recommends demolishing the building and rebuilding it using some of the original materials to maintain a facade reminiscent of the earlier building. Johnstone said a new building would be required to blend aesthetically into the historic village district.

“My recommendation is to take it back to the voters,” Keizer said.

Abden Simmons, chair of the board of selectmen, said he is in favor of a vote at next year’s June town meeting as opposed to calling a special election to decide the issue. “We really need to have a representation of the town out to vote,” he said. A ballot question could not be readied in time to be part of the Nov. 2 polls.

Regarding the risk of VOA bowing out of the project due to the delay, Simmons said, “If they walk away, they walk away. And we start over.”

Johnstone said there is an opportunity for a brownfield grant that could cover tear-down costs, but applications must be submitted by the end of October. 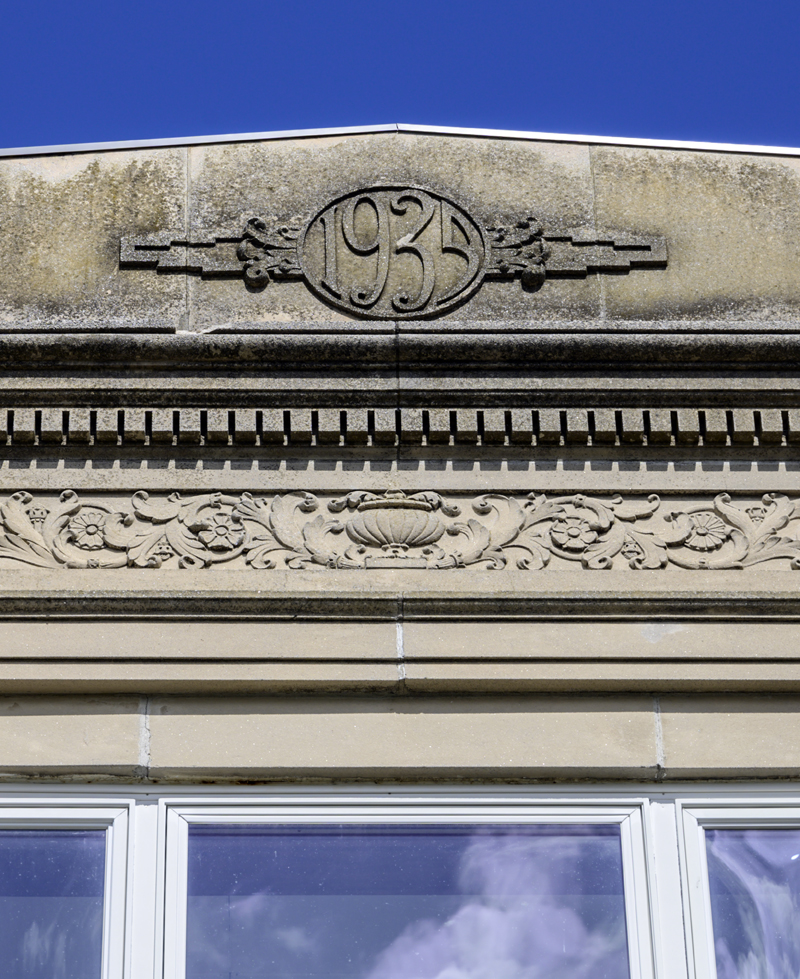 The cornice of the A.D. Gray building commemorates its 1935 date of construction in Waldoboro on May 14.
(Bisi Cameron Yee photo, LCN file)

A brownfield is an area of developed land that is no longer in use, and that may be contaminated.

Johnstone said there is no harm in submitting the grant with the understanding that town residents must approve the change in approach prior to finalizing the deal with VOA. The town can decide not to accept the grant money if voters reject the new plan.

Butler said he would hate to lose the opportunity with VOA by not applying for the brownfield grant, and proposed they proceed with the application in partnership with the non-profit to improve the chance of obtaining funding.

Butler stressed that the application is not a commitment to move forward.

The town has a non-binding memorandum of understanding with VOA regarding the A.D. Gray project. They are currently in the process of negotiating a more binding option agreement for the transfer of the property.

The board voted to authorize Keizer and Johnstone to research the brownfield grant.

Keizer spoke to the board at length on the emergency services staffing crisis, advocating for a proactive and transparent response.

“My job is to anticipate the bad things, and prevent them,” she said. “You didn’t hire me to tell me what you want to hear. You hired me to tell you what you need to know.”

Waldoboro stands to lose three individuals to Gov. Mills’ vaccine mandate, which represents a minimum of 32 hours a week per person cut from an already stressed department.

Keizer fears Waldoboro Emergency Medical Services won’t be able to answer calls. The schedule for the upcoming weekend already reflects no emergency medical technician or paramedic coverage for the town on either Friday or Saturday night.

An additional $5 per hour incentive is being offered in an attempt to secure coverage, but Keizer said the town may be forced to rely on help from other services to respond to any emergency calls on those shifts.

“That’s what we face every week now,” she said.

Fire Chief Paul Smeltzer said that qualified firefighters are stepping up to fill EMS shifts which has a ripple effect and may cause delays in fire response. Smeltzer himself has fielded EMS calls.

“This is widespread,” he said.

Keizer said that while she understands the motivation for the vaccine mandate, “It is only compounding a bad situation.” She is not viewing the issue from a political perspective. Instead she said, “It’s about good governance.”

Keizer contacted the governor’s office, the Maine Emergency Management Agency, Maine Emergency Medical Services, and the Maine Center for Disease Control and Prevention, but has not found any answers. Maine CDC and Maine EMS have not responded to emails or returned her calls.

“Someone in a position of power at the state level has got to take this seriously,” she said.

Keizer is “frustrated and saddened by the lack of response and lack of urgency.”

The proposed location for a community center and a medical facility was determined to impinge on wetlands which would make it costly to build on.

Keizer said the expense could be well over $200,000 to purchase the right to build on the municipally-owned property.

The location was assessed in 2000, but conditions and Maine Department of Environmental Protection regulations changed since then. Keizer asked the Maine DEP to confirm the findings, and advise on the feasibility of mitigation, but the town is beginning to explore alternative locations.

“It’s an important project health-wise, and economically for our community,” Keizer said.

The board approved a liquor license for The Waldo Theatre. The venue will be able to serve wine and beer on the premises, primarily during concerts and plays.

The board approved naming the pocket park near the Hannaford grocery store “The Medomak River Rest Area,” after a survey by the town’s conservation commission determined that residents overwhelmingly supported the name.

Waldoboro’s Oktoberfest is from 11 a.m. to 3 p.m. Saturday, Oct. 2, at Cider Hill Farm. Selectman Bob Butler commended the Pooley Realty group of William Raveis Real Estate for its support of the event, and Selectman William Pratt said Oktoberfest is “a great opportunity for the community to get together,” especially since the town’s Waldoboro Days celebration did not happen this year.

The Great Art for Great Reads online auction benefiting the Waldoboro Library is live with over 70 works of art by local artists up for bid.