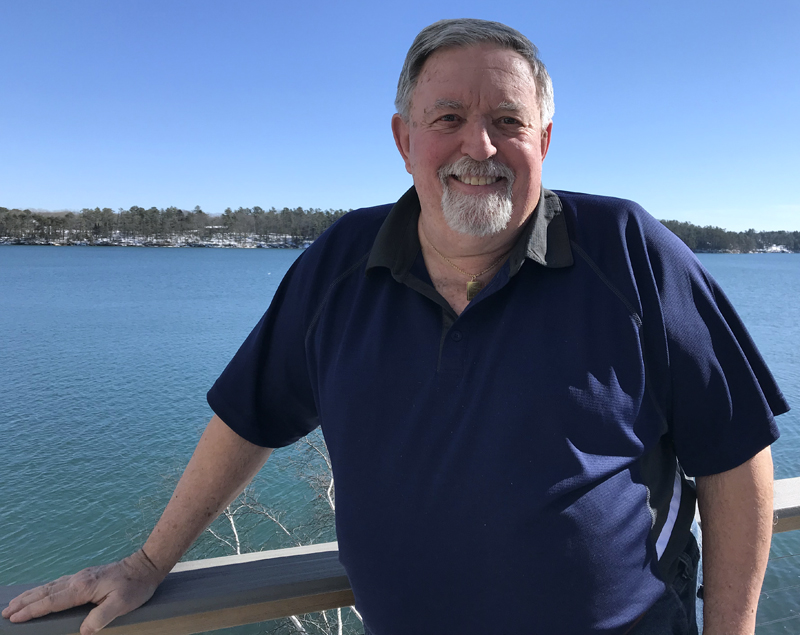 Rick Simonds at his home on the New Meadows River in Brunswick. Simonds was a star athlete at Waldoboro High School and a championship softball coach at Bristol Consolidated School before going on to a hall-of-fame career as a college basketball coach. (J.W. Oliver photo)

Rick Simonds belongs to four halls of fame as a basketball coach and player. He will soon enter a fifth, the Maine Basketball Hall of Fame. But for all his success in college hoops, Simonds remembers an elementary school softball championship with Bristol among the high points of his career.

When Simonds coached St. Joseph’s College to its first national tournament win in 1987 – an upset of Biola University from Southern California – a reporter from USA Today suggested that it must have been the biggest win of his career.

“I replied, ‘You know, it ranks right up there with the time Bristol beat Castner in softball,’ because I remember that as one of the most enjoyable, satisfying victories that I’ve ever had, even though I’ve had an awful lot of wins now,” Simonds said.

Simonds was a young coach at BCS in the 1970s. After college and a stint in the military, he landed his first teaching job at BCS and coached boys soccer and girls basketball and softball.

The team from Castner Grade School in Damariscotta was “far superior” to Bristol, Simonds said. “We played a double-header during the season and they won both games convincingly.”

But Bristol advanced to the 1974 league championship game to set up a rematch. “In softball, if you have a good pitcher, you have a chance,” Simonds said. He had his ace in Amanda Russell.

A win was still a long shot, and the Blue Devils were in need of some luck.

With one out between Bristol and the championship, a Castner batter hit a line drive right at the center fielder. The ball wedged between her chest and arm – not in her glove – and she held on for the last out.

To the girls and their young coach, “it was like we had just won the World Series,” Simonds said.

All those years later, the reporter from USA Today “had no idea what I was talking about,” Simonds said, “but to me, that was how much that win meant.”

Simonds would go on to a long career as a coach of high school, college, and professional basketball, including 23 seasons as head coach of the St. Joseph’s College men’s team.

His record as coach of the Monks was 466-176, a .726 winning percentage. His teams won 11 conference titles and advanced to six national tournaments. He never had a losing season.

He will enter the Maine Basketball Hall of Fame during an induction ceremony at the Cross Insurance Center in Bangor on Aug. 18. 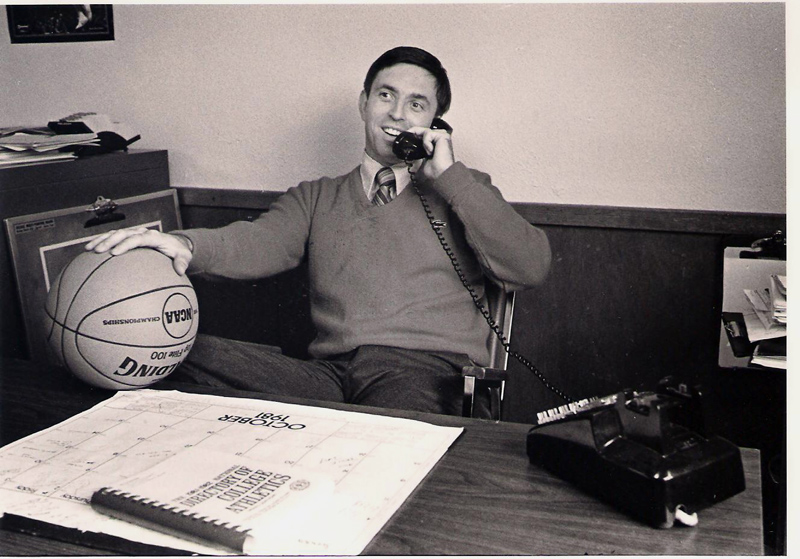 Simonds credits his success to hard work, a “maniacally competitive” nature and a scout’s eye for talent.

Simonds is originally from Massachusetts. Basketball was not his first choice for a career.

His father, Dwight “Si” Simonds, was a pitcher in the minor leagues for seven years, including three at the AAA affiliate of the Boston Red Sox, then the Louisville Colonels.

“I assumed, as a kid growing up, that I would be a Major League Baseball player,” the younger Simonds said, but “God gave him a better arm than he gave me.”

After a series of moves, the family settled in Friendship and Simonds enrolled at Waldoboro High School midway through his freshman year.

He played pitcher and shortstop on the school baseball team, as well as on a local Babe Ruth team that won a state championship with a come-from-behind victory over Saco.

In basketball, he was a standout point guard. One of his most vivid memories, from his sophomore year, is of a Western Maine Class M semifinal against Old Orchard Beach at the Lewiston Armory. 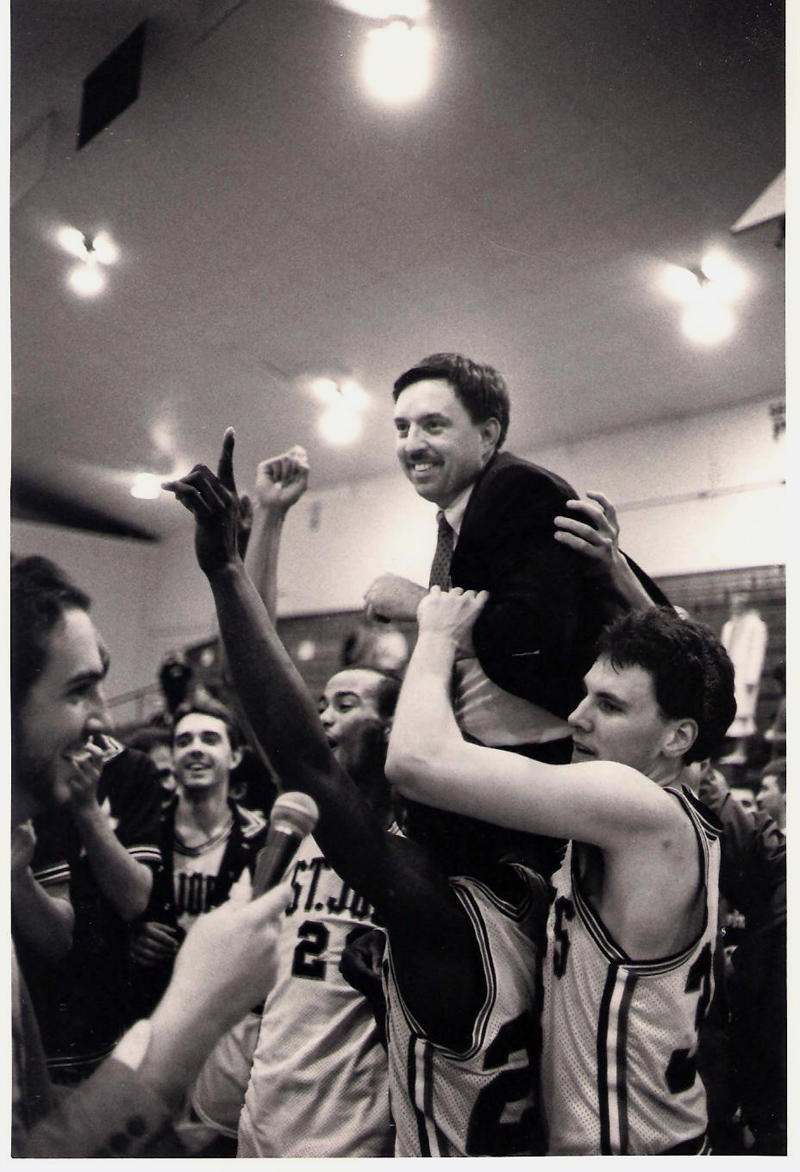 Rick Simonds’ players lift him onto their shoulders after a 75-74 win over Castleton State College to take the National Association of Intercollegiate Athletics’ 1986-1987 New England championship and secure a berth in the national tournament. (Photo courtesy St. Joseph’s College Athletics)

The reliable free-throw shooter went to the line with four seconds on the clock and a chance to win the game.

“I missed the front end of a one-and-one,” he said. “If I’d made them both, we would have won, and to this day I’m devastated by it.”

Due to an eligibility issue related to his midyear arrival as a freshman, Simonds transferred to Maine Central Institute after three years at Waldoboro High. He graduated in 1968.

He was already thinking about a career as a coach. He spent the summer as a counselor at an elite basketball camp in New York, Kutsher’s Sports Academy. Seven of his fellow counselors would go on to play in the NBA.

In the fall, he enrolled at Gorham State College, a predecessor of USM. He made the varsity basketball team as a freshman and, after a few games on the bench, started the rest of the season at point guard.

He earned nine varsity letters – four in baseball, four in basketball, and one in soccer – he started at goalie as a senior despite having never played the sport.

After graduation and a stint in the Maine Army National Guard, he spent a year and a half at BCS before going on to coach the Ellsworth High School boys basketball team.

“Ellsworth was a storied program,” Simonds said, but it had fallen on hard times, with a losing record for several straight seasons.

In Simonds’ first season, the team finished 9-9 and ninth in its division, one place out of the playoffs.

“We finished ninth by 1.04 heal points and I put signs of 1.04 on every hall, corridor, locker room,” Simonds said. He told himself Ellsworth would not miss the playoffs again.

“The next four years we had terrific success,” he said. “A couple of years we were 16-2, but we could not get by Bucksport.”

After five years at Ellsworth and declining an offer to become head coach of the Maine Lumberjacks in the Continental Basketball Association, Simonds arrived at St. Joseph’s.

To try out for the team, each player had to run 2 miles in 12 minutes. Two key players caught rides part of the way. “I immediately dismissed them from the program,” Simonds said.

“I set the tone, purposefully, that if you want to be in this program, you have to sacrifice, and I’m not putting up with any shortcuts,” he said.

His philosophy was to find good athletes, teach them how to play basketball, and motivate them to play hard. He worked as hard to recruit players as he did to coach them.

“I was driving to Massachusetts and Connecticut, two, three, four times a week,” he said, to watch high school games.

Once, on his way to see a prospect in Connecticut, he fell asleep on Interstate 495 in Massachusetts and wrecked his car. The player ultimately went to another school.

“I didn’t mind the fact that the car was destroyed,” Simonds said. “I couldn’t believe that kid didn’t come!”

In 1993, Simonds took a year’s sabbatical to accept a position as associate head coach under Bob McKillop at Davidson College, a small Division I program in North Carolina. 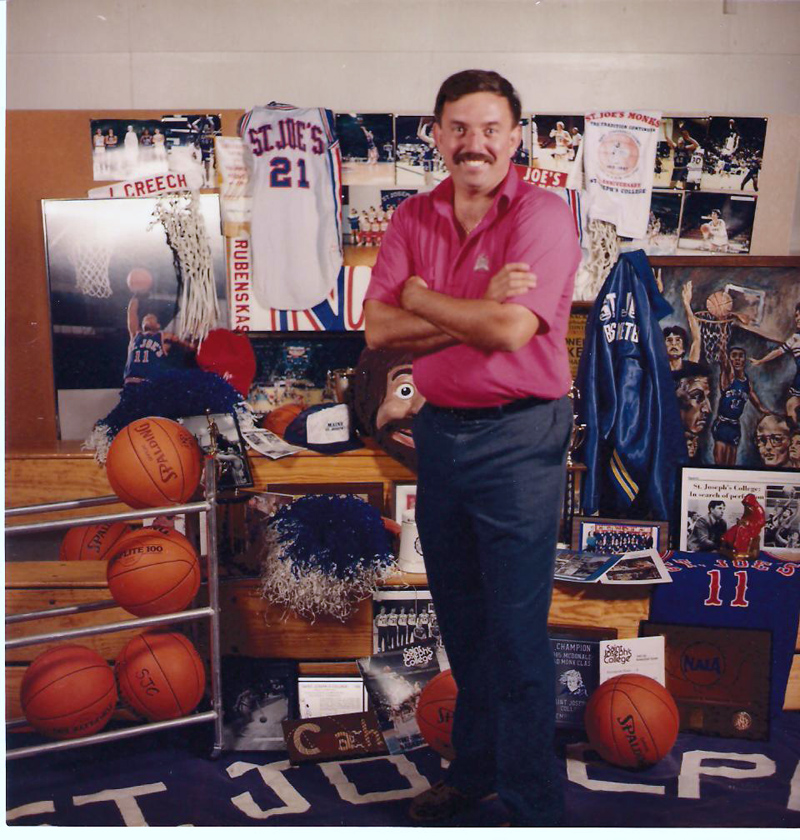 It was a big break for Simonds – a step toward becoming a head coach of a Division I program. The team had its first winning season under McKillop and Davidson offered him a contract to stay.

From a career perspective, it was “a no-brainer,” he said. But he turned it down. He was a divorced father of two young girls and had seen them only twice all season.

McKillop remains head coach at Davidson today, perhaps most famous as the college coach of NBA superstar Steph Curry. Two assistants under Simonds would become head coaches in Division I.

But Simonds was soon on to another adventure, into the world of minor league professional basketball. In 1996, he was assistant coach of the Portland Mountain Cats in the U.S. Basketball League. 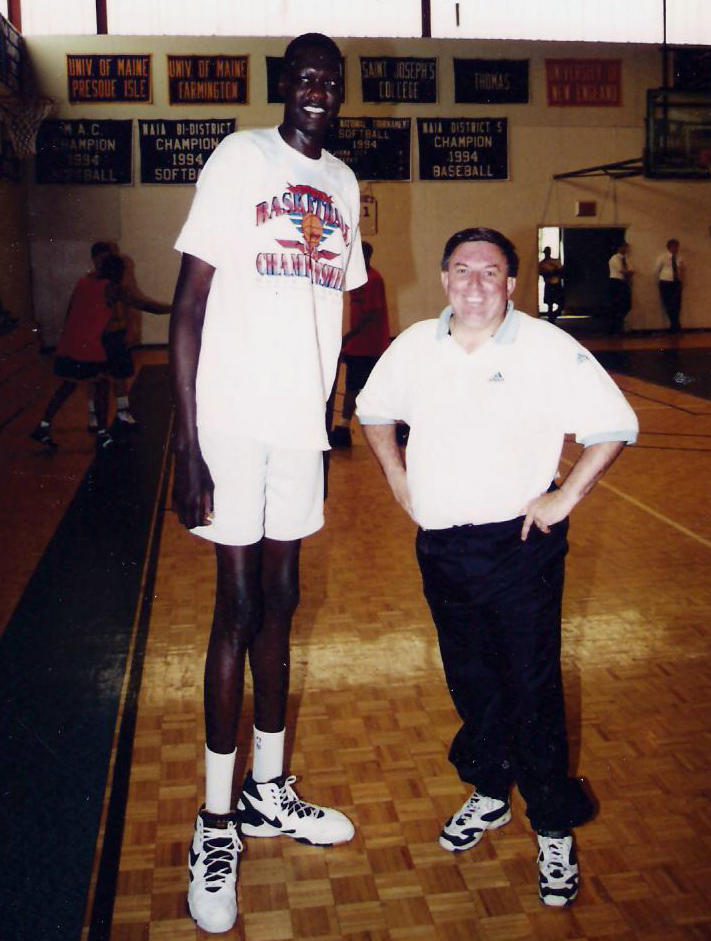 The next year, the team changed its name to the Portland Wave and promoted Simonds to head coach and general manager. The team folded after a year and the league followed suit some years later.

Simonds left St. Joseph’s College in 2003 with the most wins of any coach in school history. He coached at Bonny Eagle High School in Standish for six years and returned to St. Joseph’s as an assistant from 2012-2014.

Today, at 69, Simonds stays busier than many people half his age. He teaches creative writing and English at Bonny Eagle. An author of two murder mysteries, he is at work on a third. He sells real estate.

And, of course, he stays active in basketball. Simonds works with young players as the founder of Renegades Basketball, an Amateur Athletic Union program with 33 teams and more than 300 players.

He calls high school playoff games for the Northeast Sports Network,  but Maine sports fans may know him best for his 10 years as color commentator for the Maine Red Claws, the NBA G League affiliate of the Boston Celtics.

“If you look at any coach at the highest levels, they started at the bottom,” he said, like he did at BCS all those years ago.

As for young players, Simonds tells them to work on their game year-round.

Today’s high school coaches have far more restrictions on the amount of time they can work with players than in the past.

At St. Joseph’s, some of Simonds’ teams would have 80 practices before their first game. Some high school teams now might have six.

“You have to do it on your own,” he said of players who want to improve.

When Simonds reflects on his career, he counts neither the halls of fame nor any win as his greatest accomplishment.

“As a young person, you want to carve a name for yourself; therefore, each win, each championship, is significant,” he said. “When you look back on it, it’s not the W’s or the trophies, it’s the people that meant so much and the relationships you have.”

Simonds and his wife split their time between homes in Steep Falls and Brunswick. He has three adult children.