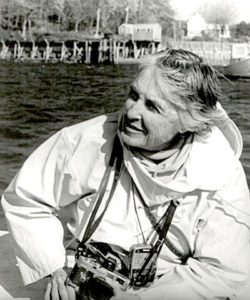 Documentary photographer Olive Pierce in 1995, in a boat off the Maine coast. (Photo courtesy Laurence Pierce)

Olive Pierce’s black-and-white photograph “Early Morning Fog, 1990” depicts three boys in caps and worn clothing standing on a dock on a foggy morning; one of them is giving the camera a slightly furtive look. The photograph could be seen as a typical piece of Maine maritime artwork had Pierce decided to focus only on the landscape and leave out the children. As it is, her photograph goes beyond landscape art, giving the viewer a strong feeling about the lives of the people who inhabit such landscapes.

In her 1996 book “Up River: The Story of a Maine Fishing Community,” Pierce – a part-time Lincoln County resident who passed away May 23 at the age of 90 – wrote of quintessential Maine terrain as being “mined with cliches – the weathered house, the stack of lobster traps, the boat riding at anchor in the fog.”

“To break through to a deeper layer of observation and to translate what is seen into a photograph that stands on its own as a picture has been my challenge,” said Pierce.

It is a challenge to which the resident of Rockland and Marsh Island, in Muscongus Bay, rose time and time again in her 40 years of taking photographs in Maine and Massachusetts.

“She was a documentary photographer, and the thing in my mind that really distinguished her was her abiding respect for the people she documented,” said Pierce’s son, Laurence Pierce, in a recent phone call from his mother’s Marsh Island home. Pierce was clearing out and cleaning the house ahead of a memorial gathering for his mother, which was held Saturday, June 18 on the island. The attendees included Olive Pierce’s longtime friend, Bristol lobsterman Eugene “Bimbo” Carter, one of the subjects of “Up River,” his wife Manola, and some 40 members of their family.

“She was really an activist and cared deeply about issues both very local, on one hand, and ones that affected the world, on the other hand,” Laurence Pierce said of his mother.

He spoke of his mother’s trip to Iraq in 1999 to document the effects of economic sanctions imposed by the United Nations Security Council on the lives of Iraqi children.

“The purpose of the trip was to document the suffering because of sanctions,” he said. “The issue for many humanitarians was the suffering imposed on children by sanctions.”

Pierce’s mother’s 1986 book “No Easy Roses: A Look at the Lives of City Teenagers,” a photo-heavy book documenting the lives of students at the Cambridge Rindge and Latin School in Cambridge, Mass., is an example of his mother’s ability to represent the depth, and often heartache, of the lives of others in a single photograph.

“Some of them are just heart-rending,” said Pierce of the photographs.

“She took a real interest in people,” said 64-year-old Tom Griffin, an organic farmer from Hope, of Olive Pierce. They became friends in 2002.

“She was a cool lady – a very, very interesting person,” he said. “She would talk to people she just met; she would ask what they did and make a connection to something happening in her life.

“She would come to all of my potlucks,” Griffin said, telling the story of how he would seat her in a straight-backed chair at the end of a picnic bench, because it was too uncomfortable for her to sit on the bench. People would sit next to her, he said, and talk with her and always end up saying, “Wow – very interesting!”

“Everyone loved to be next to Olive. That was the influence she would have on people,” Griffin said.

Griffin said Olive Pierce’s love for all people and keen interest in social justice seemed to have come from the fact that she grew up in an upper-class home in Lake Forest, Ill. and became exposed to poverty for the first time on a life-changing childhood trip “from Chicago to Wyoming, right in the middle of the Depression” with her parents. She wrote about the experience in an unfinished memoir, he said.

As Griffin told it, Olive’s father stopped the car at one point during the trip to give a ride to a man in a truck that was broken down on the side of the road.

“It was a typical Depression-era sight,” said Griffin. “Everything they owned was on that truck.”

It was, said Griffin, Olive’s first realization that the man was poor and that she and her family were well-off.

“I think this thing that happened in the Depression era was her first realization of class,” Griffin said. “It became seminal for the rest of her life.”

Significantly, later in her life, Olive would send her children to public school, the Cambridge Rindge and Latin School, instead of a private school, as she had attended.

Regarding the issue of class, Griffin said, “She saw the unfairness of it and wanted to rectify it. … She had a huge heart.”

“She had a heart of gold,” Eugene Carter said in a recent phone interview. He and a number of his family members are featured in “Up River.”

“She didn’t care if you had an eighth-grade education or you finished college. She never looked down on anybody, whether you were rich or poor or gay or had a disability,” he said.

Working with Pierce on the creation of “Up River” was “just incredible,” Carter said, adding that “she had a mind that, if she’d see somebody, she’d remember their name. She’d always remember all the kids’ names” and would ask about them whenever she visited.

And, he said, she just liked to have fun.

“We’d have a potluck dinner or go to a birthday party and she’d sit and everybody talked to her and she had a wicked good time,” said Carter. “She enjoyed life and she loved people.”

“Also, she’d make sure you registered and voted. She didn’t care how you voted; she wanted you to vote,” Carter said. Once, he said, “she convinced a guy to vote while she was at a party. When she got done talking, he was convinced.”

“She was one of the best persons that I ever met and she was good to everyone I know,” Carter said. “Taking pictures, and the things she done for other people – it was just unreal. She’s going to be sadly, sadly missed.”