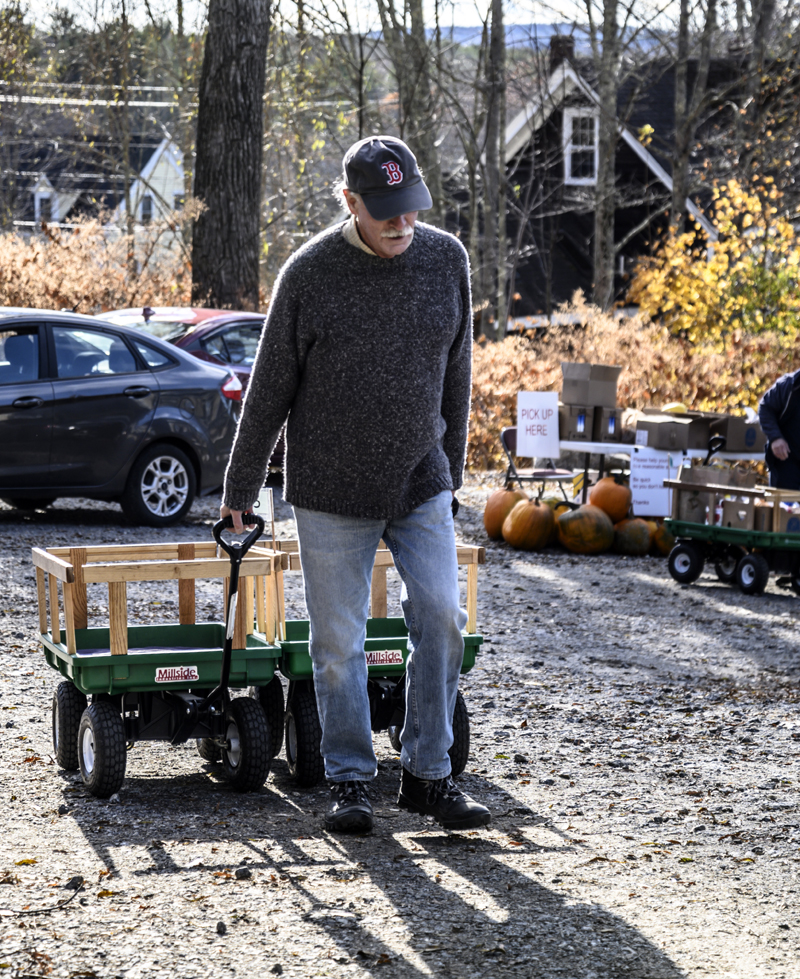 Andy Lackoff brings empty wagons back after helping take loads of food to a car that had broken down while on its way to the food pantry in Waldoboro on Nov. 16. (Bisi Cameron Yee photo)

“We are ready,” said Pam Edwards as she and a team of experienced volunteers geared up for the Waldoboro Food Pantry’s distribution day on Nov. 16. It was the last food pantry day before Thanksgiving and there were fresh turkeys making their way into the wagons rolling out to waiting cars.

According to volunteer Janet Lee, the pantry was also providing an extra boost of vegetables – many local farms brought end of season produce to be dispensed to residents facing food insecurity.

“I go home and I’m overwhelmed by the generosity. It is so rewarding to be able to give this to people,” Lee said. “I’m so grateful for all the giving.”

Even as cars lined the long driveway of the Medomak House on Friendship Road, donors were still pulling up and dropping off more food. A couple walked up the long driveway with a turkey to donate. A truck pulled up to offload winter squash. And with all this going on, that steady stream of wagons continued to roll.

Nancy Lipper, vice president of the food pantry, managed the front of the line, asking each driver how many families need to be fed, radioing a number to Lynn Lackoff, the day’s “wagon master” who planted a colored flag with that number on each wagon, and sent them on to the staging area.

There Edwards, Lee, Sherry Gallace, Ted Bean, and Carol Brazier loaded them up with bags of apples, loaves of bread, milk, eggs, and a collection of non-perishable staples.

Brazier started volunteering at the Waldoboro Food Pantry in March 2018. She said it’s better than sitting at home twiddling her thumbs. “It’s satisfying to feel the public is being served and I helped a little,” she said.

The wagons were wheeled back out by Lenny Ryan, Dale Turner, Andrew Lackoff, and Meyer Drapkin. Scott Spaulding dropped a turkey in the wagon bed. Emmet Tate added potatoes.

Lynn Lackoff directed them down the driveway – to the red pickup, white Ford, or tan Toyota waiting for the food that will help sustain families for the next three weeks until food pantry day rolls around again.

Lynn Lackoff has volunteered since February 2020. She’s retired, wanted something to do, and decided to do this.

“It’s fun,” she said. “They’re really a great bunch of people. And when you see all the different pieces, the coordination, it’s amazing.”

Maurita Lord, who’s been volunteering to deliver food since earlier in the pandemic, drove up in a panel van. In a matter of minutes, Ryan and Andrew Lackoff helped her load it with food for 18 families at the Sproul Apartments, people who don’t have the means to pick up the food themselves.

The pantry opened at noon. By 12:06, Lipper called the Waldoboro police for traffic control as the line of cars spilled into the street. Normally a volunteer is able to manage the traffic flow, but with the increased demand for the holidays, the cars were stacking up.

As the vehicles moved to the head of the line Lynn Dains offered them additional items that were donated in limited supplies. She had bars of soap, almond milk, cat food, additional root vegetables, and donated pumpkins.

One car accepted her advice to stock up on soap, not knowing when it might be available again. Another car took a pumpkin to make pie. Another asked if there was any dog food available, but Dains said not this time.

Stewart Campbell pulled up wearing a red knit Santa cap his wife made for him. Campbell takes on the role of Santa Claus during the holiday season and saw the opportunity to help a family in need as an extension of that role. Dains handed him a large head of cabbage to add to his delivery.

On Nov. 16, the volunteers of the Waldoboro Food Pantry distributed food to 124 households, totaling 307 people, including 86 under the age of 17 and 61 over the age of 65. There were 10 new families needing assistance.

The Waldoboro Food Pantry has served the greater Waldoboro area from a variety of locations since the 1980s, helping hold hunger at bay for anywhere from 60 to over 100 households.

When the pandemic hit, it started operating as a drive thru from the town office parking lot, with help from town officials and Waldoboro’s emergency personnel. But a more permanent location was needed.

In June 2020, the pantry relocated to the Medomak House on Friendship Road where owners Ron and Peggy Davis provided the large barn on the property as a base of operations.

The large building and long driveway was ideally suited for the needs of the pantry during the pandemic. The recent addition of a walk-in cooler enabled the pantry to accept and store more food donations, and to maximize the efficiency of their all-volunteer team.

The cooler cost approximately $4,000, plus installation, according to Operations Manager Jeff Brown.

The Davis’s contributed to the cost along with a number of other donors. The food pantry operates 100% on donations of food products, staples, and cash from individuals, local businesses, churches, community organizations and the towns it serves.

The food pantry’s annual appeal will be in mailboxes in December, according to Treasurer Natalie Masse. It is in dire need of a van to replace the current practice of using volunteers’ vehicles, which Masse called “unsustainable.” Several local businesses have already stepped up to help but more funds will be needed.

The van will allow the pantry to be able to obtain and distribute more food to the community, not just at the physical location on Friendship Road, but also through providing pop-up food pantries at mobile home or apartment complexes, and to provide service outside the pantry’s regular distribution hours.

“We have to start taking the food pantry out into the community to sustain and increase our clientele,” Masse said.

The Waldoboro Food Pantry is located at 124 Friendship Road and is open from noon to 3 p.m. every first and third Tuesday of the month. The pantry serves the communities of Waldoboro, Bremen and Nobleboro. New clients experiencing food insecurity are always welcome.

Donations can be mailed to: Waldoboro Food Pantry, P.O. Box 692, Waldoboro, ME 04572, or submitted online at waldoborofoodpantry.org.

For more information, find the Waldoboro Food Pantry on Facebook, or call 520-5100.