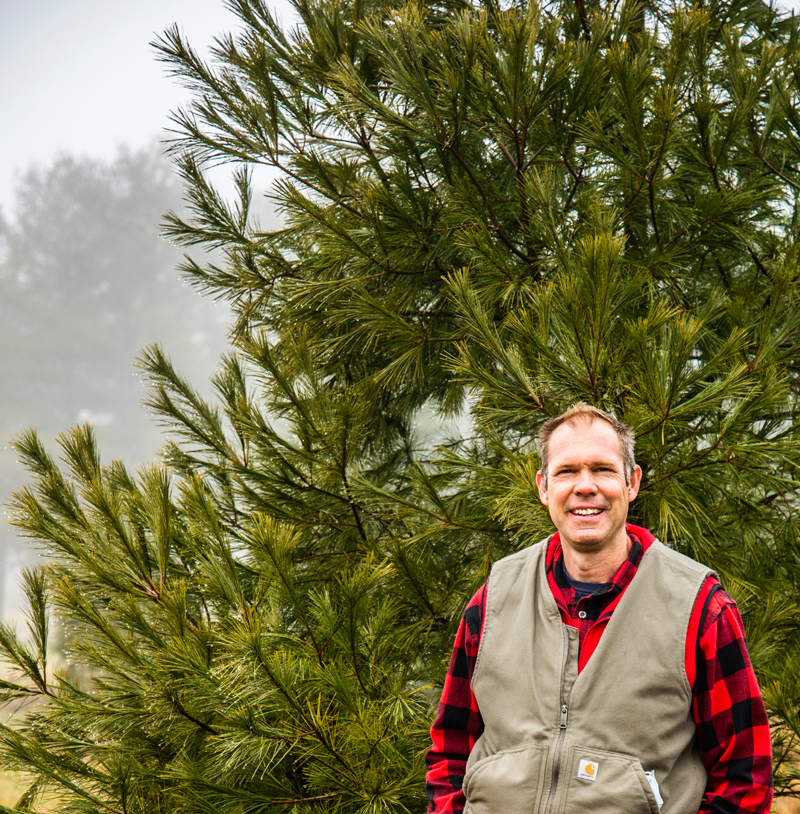 David Karas stands in front of a white pine at Echo Hill Choose and Cut in Waldoboro on Sunday, Dec. 13. A pine from Karas’ nursery is representing Lincoln County at the Blaine House in Augusta. (Bisi Cameron Yee photo)

Just before the start of the holiday season, in November, a truck pulled up to the Echo Hill Nursery in Waldoboro to transport a 9-foot-tall white pine to a place of honor at the Blaine House in Augusta.

The tree now stands among 14 at the governor’s mansion, part of a holiday display in honor of COVID-19 victims and front-line workers.

This particular pine started its journey as a wild seedling, dropped from its parent tree into the soil of the nursery, a second-generation family business started in 1974 and currently owned by David Karas.

The seedling was removed from its native soil while still very small, 4-6 inches according to Karas, and placed in a transplant bed to ensure a good root system. After four years in the transplant bed, the tree was planted in a field, where it grew for another three years. Then the tree was “root pruned,” its roots broken in order to ensure a manageable root ball for ease of planting in landscape applications. Another four years of growth in the ground at the rate of approximately 1 foot per year brought it to the optimal 8- to 9-foot size for a Christmas tree.

The Maine Christmas Tree Association asked its members to donate trees for the display and Karas suggested the white pine, a hardy conifer native to Maine. Usually grown for landscaping projects, white pines aren’t commonly considered for Christmas trees, but Karas was sure he had one that could hold its own among the more traditional balsam firs and blue spruces.

On the Sunday before Thanksgiving, the tree was harvested and transported to Augusta. There, it was decorated by volunteers from a number of state and local agencies before being dedicated by Gov. Janet Mills as a “tribute to those we lost and to those who strive every day to protect our health and safety on the front lines of this pandemic.” It stands now on Capitol Street as a symbol of the resilience of Maine’s people.

Karas is philosophical about the honor. He knows Christmas trees mean a lot to people, but as someone who works in the business, he generally looks at the trees from a more practical perspective. Still, he’s always enjoyed putting a tree up himself, and as someone who celebrates the holiday, he sees the Christmas tree as a symbol of hope. “I hope that people who visit the Blaine House, see all the lights, will have the same feeling,” he said.

The Blaine House is located at 192 State St. in Augusta. The display of trees can be viewed throughout the holiday season.