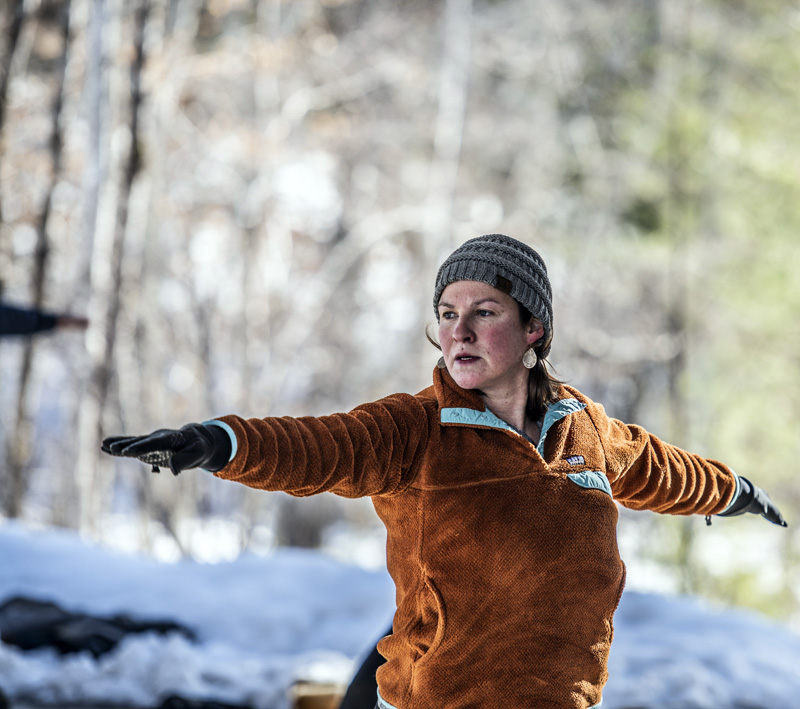 On Sunday, Feb. 21, a small group gathered under a bright blue sky at Hidden Valley Nature Center in Jefferson for a snowshoe yoga session.

Maine Outdoor Yoga founder Sarah Plummer, of Damariscotta, led five women to the nature center’s barn, where they dropped their yoga mats and donned their snowshoes for a 2-mile hike along snow-packed trails. The loop introduced the participants to the winter beauty of the park, as they traversed snow-packed trails and crossed a snow-covered pond.

The Hidden Valley Nature Center is a 1,000-acre preserve run by the Midcoast Conservancy with miles of multiple-use trails, according to its website. Plummer, who is passionate about being outdoors in nature, volunteers with the conservancy.

Upon their return to the barn, class members set aside coats and snowshoes in order to participate in a 60-minute, socially distanced vinyasa yoga session in the open concrete foyer in front of the barn.

Plummer, who has had surgeries on both hips, gears her guidance toward allowing each individual practitioner to find their own pace and listen to their body.

Plummer has been teaching yoga and other exercise classes for 30 years. According to her website, her mission is “to inspire you to connect to nature and reach your potential in mind, body, and spirit through healthy living.”

Maria Hadjiyane said she had just learned to snowshoe at L.L. Bean and drove up from Portland to practice her newfound skills. Hadjiyane said she is new to Maine and was eager to have a Maine adventure. She said snowshoe yoga sounded like a great blend.

John Hayden, of Waldoboro, volunteers at the nature center and joined the class on a whim as he finished his shift. “I’ve never done yoga on a concrete mat before,” he joked.

London Hunter was the youngest member of the group. She said the snowshoe portion was “a lot of work” but fun.

Alicia Hunter, Emily Gregory, and Amy Flanagan have all enjoyed practicing yoga with Plummer at Pemaquid Beach Park. Plummer’s beach yoga classes were such a success this year that she continued to offer them into November. Flanagan said she still has sand on her yoga mat.

The practice ended with a light snack of cheese, crackers, and crudités accompanied by chilled or mulled wine. A crackling fire inside the barn warmed chilled hands and toes. And a stub of burning sage, known for its purifying properties, completed the ritual.

Plummer planned the snowshoe yoga class with safety in mind. The outdoor environment allows for physical distancing and the 15-person limit ensures the class size stays manageable within the space.

As a response to the impact of COVID-19 on the yoga and exercise community, Plummer also hosts a number of Zoom classes on a donation basis “to ensure that everyone is able to attend.”