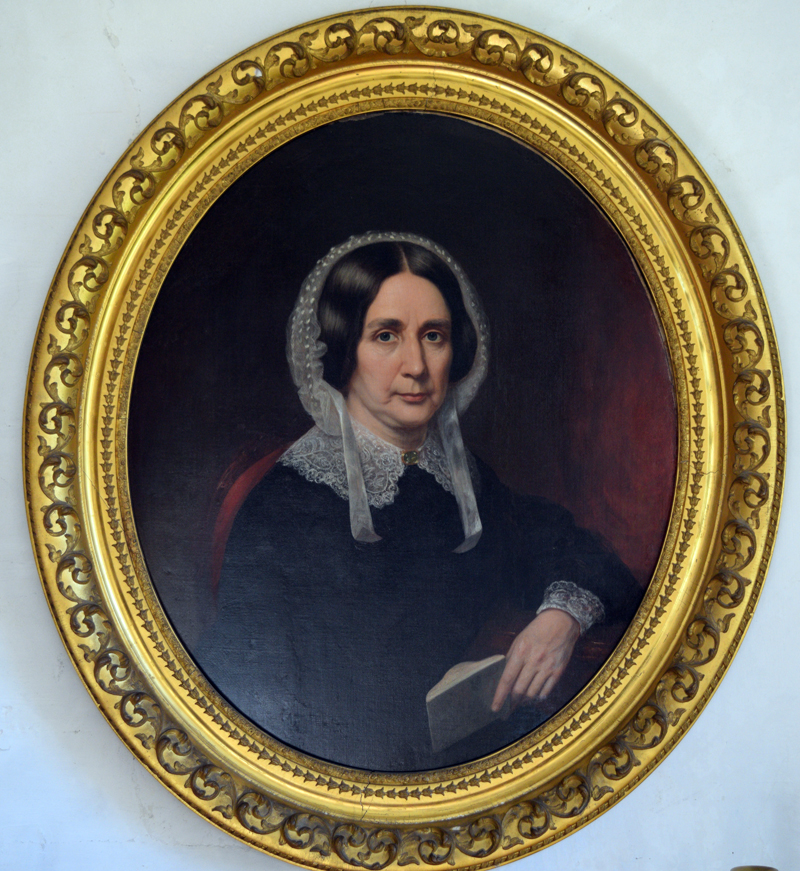 A portrait of Rebecca Johnson Prescott hangs in the first floor parlor of the Pownalborough Court House in Dresden. Aileen and David Edge donated the painting, which they drove cross-country from their home in Washington state. (Nate Poole photo)

Trustees, volunteers, and patrons of the Lincoln County Historical Association met on the banks of the Kennebec River in Dresden on Saturday, June 12 to welcome Rebecca Johnson Prescott back to the Pownalborough Court House.

Rebecca, as it was referred to throughout the evening, is not a person, but a mid-19th century portrait, brought from the state of Washington by her great-great-great-granddaughter Aileen Edge and her husband David to Dresden.

Not much is known about Prescott. The sister of John and Rowland Johnson, she lived from 1798 to 1897 and began residing in the court house after her husband died in 1833. She is buried in the court house cemetery along with her three daughters.

“I thought, we’ll bring her back to the court house, we’ll hand her off, and maybe we’ll come back in a year and see her on the wall,” Aileen Edge said. “It has just ended up turning into this amazing adventure.”

Built in 1761, the court house was owned by Samuel Goodwin and his descendents, including Prescott’s brothers, until 1954 when it was sold to the Lincoln County Historical Association.

Living just outside of Seattle, the Edges have always been a world away from the historic residence. Before Saturday, Aileen Edge had only been to the Pownalborough Court House twice before in her life, once as a child with her parents, and once again with her own children 15 years ago. However, with a picture of the property in her childhood living room, she never forgot about it.

Aileen Edge inherited the painting in July 2020 after her mother passed away on July 14. She said that the large oil painting didn’t fit in her own home and that her mother had wanted to see it returned to the court house. She got into contact with Faye Snyder, chair of the association’s collections committee, that fall.

Snyder had published an article about Henry Cheever Pratt, who painted the portrait and others at the court house that feature Prescott’s family members, just before Aileen Edge contacted her. Pratt was an accomplished Boston painter and friend of Thomas Cole, one of the most influential American painters of the 19th century. Pratt married Prescott’s niece, Sarah Howard Johnson Pratt, in 1831 and frequently visited the court house.

Snyder was delighted when the Edges reached out with an offer to donate the painting, in addition to some china, a shawl, and tortoise shell hair combs that also belonged to Prescott.

Aileen Edge didn’t feel comfortable shipping such an old and fragile painting, so she and her husband decided to drive it from Washington to Maine over the course of a two-week road trip. While many of the Pratt paintings have never left the court house, the portrait of Prescott has now traveled across the United States twice.

“The best thing though has been making the connection with the current people who are running and caring for the court house,” Aileen Edge said.

In addition to the Edges, there were two other distinguished guests from the West Coast in attendance for Saturday’s celebration: Aric Wilmunder and Lori Love.

A San Francisco couple with a passion for historic textiles, Love and Wilmunder donated six samplers belonging to the Prescott and Johnson families to the museum. Obtaining the samplers was cooperative effort between the couple and the historical association, each party contributing to the purchase at auction.

Love does needlework and has a passion for historical textiles. When Wilmunder looked into the genealogy behind the samplers and eventually connected them with the court house, they decided to reach out to the historical association.

“Our biggest fear was that somebody was interested that would not recognize the history and that they could end up being separated or not ever make it back to the court house,” Wilmunder said.

Wilmunder and Love eventually connected to the Edges through the historical association. The Edges sent Love a number of photos and letters they’d inherited that were connected to the samplers to help her further build the story behind them.

“It’s a wonderful way to learn about history,” Love said.

Perry Palmer, an association trustee and a docent at Pownalborough Court House, said that their collection of samplers was remarkable enough that they would likely be featured in an article in Piecework, a national magazine dedicated to textiles.

“To have, which we now have, 10 samplers from one extended family is just unheard of,” Palmer said.

Palmer and Snyder both began working with the Lincoln County Historical Association 13 years ago, and Snyder said that she is really proud of the work that she and other volunteers have done to get the museum and property to where it is today.

“We turned this place around. We did. I mean, the displays and the things that you see now are nowhere near like what it was even six years ago,” she said.

Angel Project volunteers told Snyder that she needed to have each of their samplers professionally reframed in order to be displayed for the public’s enjoyment, and Saturday marked the culmination of that effort, as well as a three-year volunteer effort to catalogue all of the artifacts at the Pownalborough Court House.

Aileen Edge applauded the trustee and various committee members’ efforts to restore and maintain the history of the property.

“My relatives and my ancestors would be so proud of how it is now,” she said.

The Pownalborough Court House is open from 10 a.m. to 4 p.m., Saturday through Monday and by appointment. For more information, go to lincolncountyhistory.org.