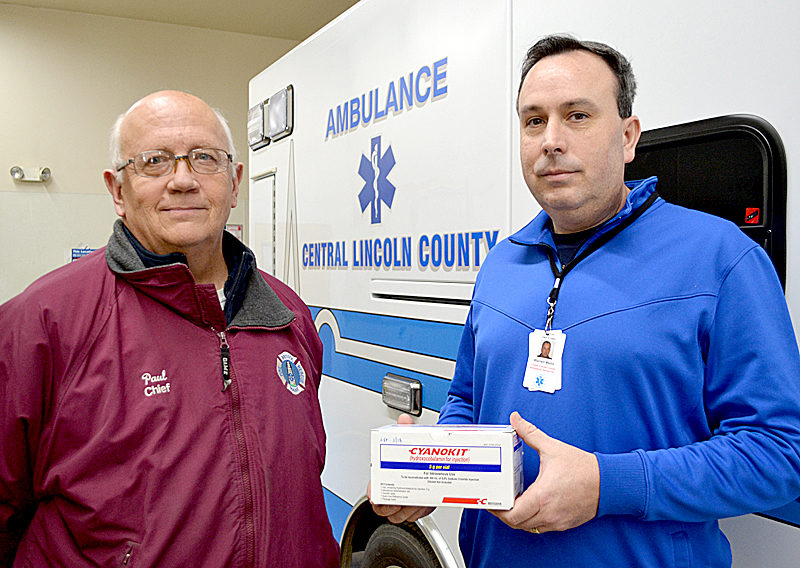 Due to a partnership between the Central Lincoln County Ambulance Service and six area fire departments, all five of the service’s ambulances now carry a medication to treat firefighters, fire survivors, and other victims of cyanide poisoning.

The effort, spearheaded by Bristol Fire Chief Paul Leeman Jr., got its start back in October 2015, when Leeman attended a presentation by Augusta Fire Chief Roger Audette about the dangers of hydrogen cyanide.

The chemical poses a danger to firefighters in particular, as it can be released when plastic and other materials burn, Leeman said.

“It had been in the back of people’s minds for a long time, but that’s what really brought it to the foreground,” Leeman said.

According to the website for the federal Centers for Disease Control and Prevention, hydrogen cyanide is used for fumigation, mining, and the production of synthetic fibers, plastics, dyes, and pesticides.

Hydrogen cyanide can be ingested, inhaled, or absorbed through the skin or eyes, according to the Centers for Disease Control and Prevention. Exposure can affect the central nervous system, the cardiovascular system, and the lungs. In some cases, hydrogen cyanide poisoning can be fatal.

After the presentation, Leeman spoke with Central Lincoln County Ambulance Service Chief Warren Waltz about outfitting each of the service’s ambulances with the cyanide antidote Cyanokit.

Paramedics administer the Cyanokit by IV. It is most effective when administered as soon as possible after exposure to cyanide.

The total cost for five doses of Cyanokit totaled more than $3,800.

Leeman reached out to fire chiefs in Bremen, Damariscotta, Newcastle, Nobleboro, and South Bristol to see if each department would be willing to donate funds to ensure each of the ambulances would have a kit on board. Each department agreed, Leeman said.

“I think they all knew just how important this was, not just for the firefighters on scene who are fighting the fire, but also for the people who may have been inside the building and been exposed to this,” Leeman said.

Cyanokit has a one-year shelf life. If it is not used within one year, it must be replaced.

The ambulance service is currently looking into whether it would be possible to receive credit for an expired kit to go toward a new kit as a way to reduce the annual cost. New kits could also be funded by grants.

Leeman said he would like to see continued collaboration between the fire departments and the ambulance service for similar projects.

“When we’re on scene, we’re all working as one. This is just another example of that,” Leeman said.