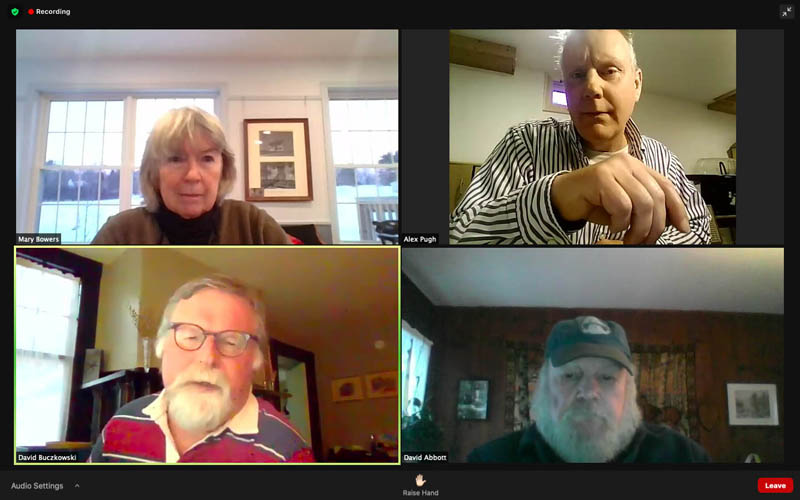 The Alna Board of Appeals discussed three appeals related to Jeff Spinney’s boat ramp over the course of two meetings Thursday, Feb. 11 and Tuesday, Feb. 16. The board will hold a third meeting in March to deliberate and vote on all three appeals.

Abutters and neighbors of Spinney’s 126 Golden Ridge Road property, where he recently completed work on the ramp, submitted the letters of appeal. The first letter is from Cathy Johnson and Ed Pentaleri, the second from attorney Gordon Smith, representing Carol Ervin, Allen Philbrick, and William Weary; and the third from Bailey Bolen, Johnson, and Pentaleri.

The appeals, two dated Jan. 6 and one dated Jan. 13, state that planning board members Joel Verney and Beth Whitney demonstrated bias in favor of Spinney, that the ramp is a permanent structure and therefore not permitted under Alna’s shoreland zoning ordinance, and that the project violates a requirement that construction be set back at least 20 feet from an adjoining lot.

Two of the letters appeal a Dec. 10 decision by the planning board to allow Spinney to do earthwork and install a temporary boat ramp. The third letter appeals Alna Code Enforcement Officer Tom McKenzie’s Dec. 17 decision allowing the same work, stating that the shoreland zoning ordinance does not give the CEO authority to issue a written decision regarding a shoreland zoning application.

The Feb. 11 meeting dealt with the two letters appealing the planning board decision.

The board began the Feb. 11 meeting by determining whether the appellants had standing to appeal. Kristin Collins, Spinney’s attorney, said that Johnson and Pentaleri do not have standing because they cannot prove that they have been hurt more than the average person by the approvals. Collins cited the Maine Municipal Association Board of Appeals manual in making the argument.

Johnson said that, although she and Pentaleri are not abutters to Spinney, they are both near neighbors and have participated in project talks from the beginning.

Smith, representing the abutters, said that the planning board should not have approved Spinney’s second application for a boat ramp.

On June 26, the Alna Planning Board denied Spinney’s application for a permit under the shoreland zoning ordinance for a boat ramp and dock on the Sheepscot River for use by the private Golden Ridge Sportsman’s Club. The Alna Board of Appeals upheld the denial Oct. 16. The U.S. Army Corps of Engineers and Maine Department of Environmental Protection had issued permits for the project.

Spinney later completed work on the ramp as outlined in his first application. He and the Alna Board of Selectmen have since reached a settlement agreement that allows the ramp to stay, but places limits on its use. Smith said that the ramp qualifies as a permanent structure below the high-tide line and is prohibited under the shoreland zoning ordinance. He said that the planning board did not adequately explain why it denied the first project but approved the second.

“We have this issue of the planning board kind of reversing itself, coming to a different conclusion, but without addressing that difference and without providing any factual findings,” Smith said. “The planning board did not say, ‘Here’s why this is different, here are the facts we find on this application, here’s why this application is not calling for the installation of a structure whereas the prior application was.’”

“Where the planning board did not make any factual findings, this board does not have anything to defer to,” Smith said. “If the planning board had said, ‘Here are the reasons why this isn’t a structure,’ then the board of appeals would have to defer to those findings. That’s not the case here.”

Smith also addressed the issue of bias, saying Verney was one of the founding directors of the Golden Ridge Sportsman’s Club and Verney and Whitney had both made public statements in support of Spinney’s first project before their appointment to the planning board.

“Maine courts have said that constitutes at least an appearance of bias, where recusal would be appropriate,” Smith said.

Collins rebutted Smith’s argument. She said that the actions of the planning board can only be undone if there is not substantial evidence in the record supporting its decision, and that its December decision had enough evidence to back it up.

“I want to be clear that it is essentially the same project. It was presented in a different way,” Collins said of Spinney’s second application. “My point of view is that, by seeing that the plan could have involved a roll-out mat that was placed on top of the earth that was being moved, that helped the planning board distinguish between what is really a structure — in that case, the roll-out mat — and what is something else.”

Regarding the emails between Spinney and Amaral, Collins said that they were all procedural and referred to which documents would be included in the record.

On Nov. 28, 2020, Spinney sent a lengthy email to Amaral detailing the alleged bias of Verney and Whitney, stating that neither made any public statements directly related to his project and both could proceed without bias.

Verney and Whitney both signed a letter to the editor published in The Lincoln County News’ June 18, 2020 edition that expressed support for Spinney’s initial project.

“As the past chair and member for many years, I personally have set aside feelings and voted for various projects that I personally didn’t like, but that the ordinance(s) allowed, that’s simply the way it is,” Spinney wrote in the email.

“Board members (including the chair) do not have the authority to consider things not written specifically in the ordinance (e.g. whether or not they think a project is ‘necessary’ to the applicant, or their personal view regarding the application, etc.), doing so would be acting in an improper manner and would open both the individuals and the town to certain legal liability as a result,” Spinney wrote.

The board continued its discussion about the appeals regarding the planning board’s decision during its Feb. 16 before discussing the appeal about the CEO’s decision.

Smith said Feb. 16 that the planning board’s decision should be overturned because the project violates the table of uses in the shoreland zoning ordinance, which says that permanent piers or docks extending below the high tide line are not allowed. He also said the project violates the town’s building code ordinance, because the boat ramp was constructed less than 20 feet from Ervin and Bolen’s abutting property.

Collins further addressed the issue of potential bias on the planning board. “Bias has to rise to the level that the person cannot make an impartial decision,” Collins said. “A statement of general support for a project isn’t enough.” She cited the Maine Municipal Association Board of Appeals manual.

There was some discussion of riprap — stones placed by humans along a shoreline to protect it from erosion — and whether Spinney’s work falls under that definition.

Pugh, who chaired the Feb. 16 meeting, said that he believes the definition of riprap to be six-inch or larger irregular shaped stones, and questioned whether the two-to-three-inch stones Spinney placed between them were allowed.

Bowers consulted the Maine Erosion and Sediment Control manual and found that the use of geotextile fabric and small stones to fill the gaps between larger ones, which Spinney used, are necessary for erosion control.

The board closed the hearing for the first two letters around 6:30 p.m. and moved on to discussion of the third letter, which appealed the code enforcement officer’s decision.

Johnson, one of the letter’s authors, said that under the shoreland zoning ordinance, only the planning board chair or the chair’s designee can issue written approval of a project, and that the CEO is not authorized. She said that written approval was not issued until Dec. 28, a day after the ramp was constructed.

Johnson also said that Spinney’s project required a new or amended DEP permit. However, according to email correspondence between DEP environmental specialist Jami MacNeil and Spinney, he would only need a new DEP permit if he installed a temporary aluminum roadway approved by the planning board.

As part of his settlement with the town, Spinney agreed not to install the temporary aluminum roadway.

The appeals board adjourned the meeting after two hours and will hold a meeting to deliberate and vote Thursday, March 4.