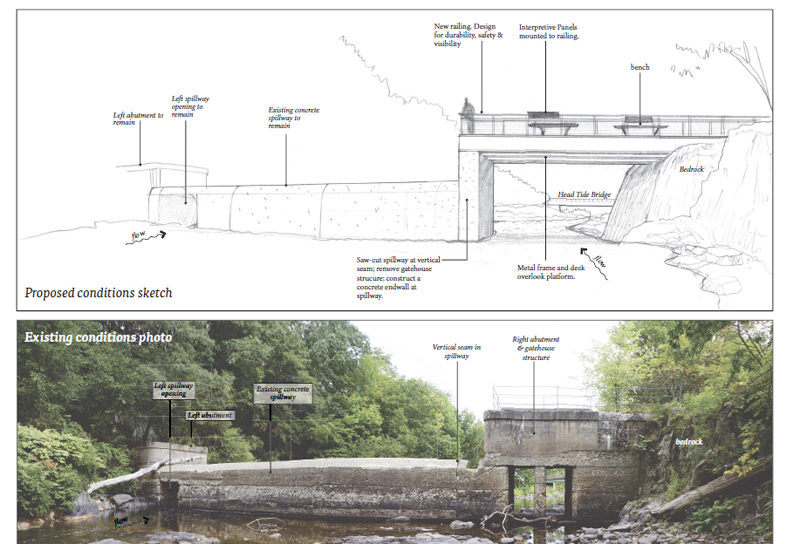 A rendering of what the Head Tide Dam would look like after implementation of the dam committee’s unanimous proposal (above) with a recent photo of the dam.

After almost two years of contentious debate about Alna’s Head Tide Dam, a committee appointed by selectmen to find a workable solution has come forward with a unanimous recommendation.

The committee is recommending the replacement of the right abutment of the dam with a new abutment that has enhanced safety and recreational features, in addition to a wider opening for fish passage.

The proposal was well-received by selectmen at the Alna Board of Selectmen’s Thursday, Dec. 15 meeting. “The proposal was brought forth unanimously from the committee, which was a good sign,” Third Selectman Doug Baston said. “It appears to maintain the integrity of the dam and will substantially improve fish passage,” he said.

If given the green light by legal counsel, the proposal for the Head Tide Dam would be brought before voters for approval at Alna’s annual town meeting in March, Baston said.

While it is still too early to know the exact process moving forward, future work on the dam may require two votes at separate town meetings, Baston said – one to approve the concept, and one to approve the final design that will move forward for construction.

About two years ago, the Atlantic Salmon Federation, a nonprofit organization devoted to the restoration and conservation of the native ecosystems of Atlantic salmon, approached the towns of Alna and Whitefield about exploring the future of their town-owned dams on the Sheepscot River, a native habitat for 11 species of migratory fish, including Atlantic salmon.

The initial Head Tide Dam Committee became bogged down with competing visions for the dam and suspicion in the community that the committee’s ultimate goal was the removal of the dam.

Alna selectmen formed a smaller, five-member committee in February to work with the Atlantic Salmon Federation to find a solution that would leave the dam in place and still improve fish passage.

The smaller committee worked to complete the desired outcomes in the four focus areas established by the larger Head Tide Dam Committee – safety, fisheries, recreation, and history, committee member Ralph Hilton said. The current proposal addresses all four of those areas, said Hilton, who was a staunch opponent of previous proposals presented to the larger committee, which involved removing large portions of the spillway.

In the current proposal, the right abutment of the dam would be removed and replaced. The new abutment would include a deck that would extend farther out in the spillway.

The platform would include new railings for safety and panels with historic information about the site. The concrete gatehouse now in place would be removed.

“I think it’s a great solution,” said Andrew Goode, Atlantic Salmon Federation’s vice president of U.S. operations. The right abutment of the dam currently has the most deterioration and is the portion of the dam most likely to fail, he said.

The replacement of the abutment will improve safety at the site and the extended opening will enable fish passage for a variety of migratory fish species, Goode said.

“This achieves meaningful fish passage but also keeps the deed covenant intact,” Goode said. “In reality, by replacing that area, we’re probably adding life to the overall lifespan of the dam.”

The swimming hole at the Head Tide Dam would be unaffected by the changes, Hilton said.

“We’re redoing it, cleaning it up, and dressing it up,” Hilton said. “I’m absolutely behind it. This does everything we said we would do.”

The Atlantic Salmon Federation would secure funding to implement the proposal, which would come through a variety of public and private sources, Goode said. Currently, the federation has focused the majority of its fundraising attention on Whitefield, which voted to remove the Coopers Mills Dam in March.

The federation is in the process of applying for several federal and state permits necessary to begin construction in Whitefield, Goode said. The Coopers Mills Dam project is on an ambitious schedule with hopes that construction will begin in the summer of 2017.

Fundraising efforts for renovations to the Head Tide Dam will go into high gear if voters approve the proposal, Goode said.

The members of the Head Tide Dam Committee started out with wildly different views, but came together in the smaller committee to find common ground and consensus, Goode said. The committee “brought people back together,” he said.