The Maine Department of Labor presented the Alna Fire Department with the Safety and Health Award for Public Employers during the Alna Board of Selectmen’s meeting Wednesday, March 14.

Since 2005, the Maine Department of Labor’s Bureau of Labor Standards has given the award to public-sector employers that meet high standards for safety and health policies and procedures, according to the department’s website. To earn the award, employers must go through a rigorous inspection by the department’s SafetyWorks! program, which aims to reduce job-related injuries. SafetyWorks! is a free, voluntary program.

Michael LaPlante, of the Bureau of Labor Standards’ Workplace Safety and Health Division, presented the award to Alna Fire Chief Mike Trask while praising the work of the department to qualify for the recognition. 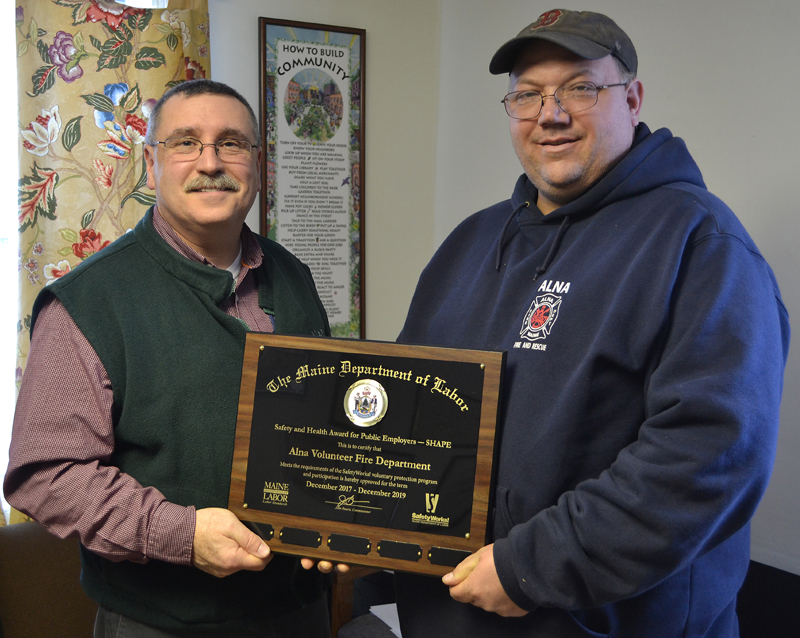 Alna Fire Chief Mike Trask (right) accepts the Safety and Health Award for Public Employers from Michael LaPlante, of the Maine Department of Labor, during the Alna Board of Selectman’s meeting Wednesday, March 14. (Maia Zewert photo)

Elsewhere in the brief meeting, the board recognized outgoing First Selectman David Abbott during his final meeting. Abbott, who has been a selectman on and off for the past two decades, decided to retire from the position and not seek re-election.

“He’s a friend,” Third Selectman Doug Baston said. “Many people, I think, have no idea how much work he’s put into this town. There’s a lot of institutional memories going out the door with him.”

Abbott said his time as a selectman has “been an interesting job” and reassured the board he would still be a presence in the town.

“It might be hard to break the habit. I’ll still show up to meetings,” Abbott said. “I’m still interested in the town, whether I’m a selectman or not.”