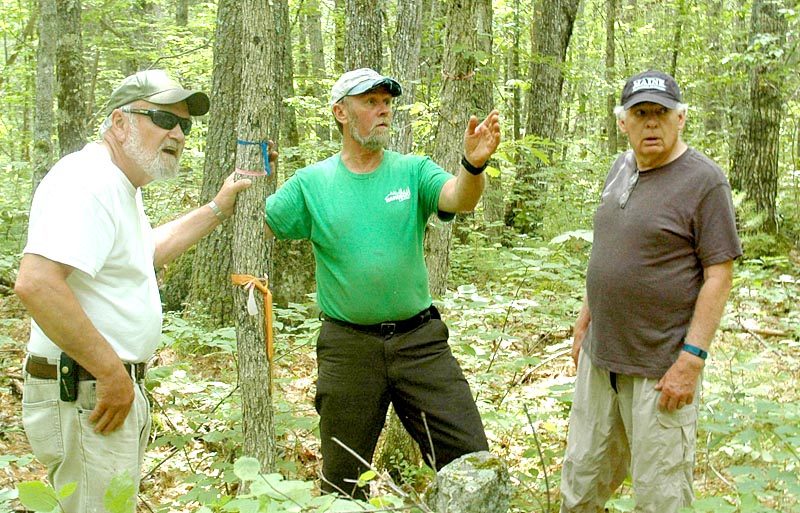 Alna and Jefferson selectmen met to investigate the exact location of the town line off Egypt Road at noon, Monday, July 18.

The selectmen used tax maps and research by John Hilton, of Newcastle, to find monuments, stones, pins, and flags marking the town line and to work out the correct location of the line.

After traversing the area in question, approximately 30-40 acres of woodland with little to no development, the three selectmen agreed to reset boundary markers. Some of the stone markers had fallen and one appeared to have been knocked over by a fallen tree. The selectmen did their best to determine the direction in which the stones had fallen.

The selectmen also agreed to reset the tax maps to indicate any changes that would occur and issue a memorandum indicating the action taken.

The town officials spent the afternoon locating markers, some easier to spot than others.

The markers, stones engraved with an “A” or a “J” on their Alna and Jefferson sides, could be found in various portions of the wooded lot, often covered with moss.

Hilton had researched his ancestors’ properties on the town line, and his research indicated a potential discrepancy between the original town line and the town line as it appears on current tax maps.

Hilton’s research went back to the late 18th century. The swath of territory walked by the selectmen includes land settled by Hilton’s ancestor Samuel Hilton.

According to Hilton’s letter, Samuel Hilton sold a 300-acre parcel to his son, Abraham Hilton. It was later determined that a portion of the parcel was in Jefferson. In 1816, Abraham Hilton successfully petitioned the Massachusetts General Court – Maine was a territory of Massachusetts until it achieved statehood in 1820 – to move the town line between Jefferson and Newcastle to ensure all of Hilton’s property was in Alna.